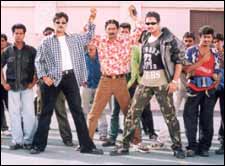 This is a miraculous forward about Hi-Tech Students. Please send this to at least 10 people. If you do not, something godawful will happen to you, like it did to me. I did not take the title and the promos seriously, and I've been suffering ever since I saw the movie.

If you ignore this mail and delete it without reading it, you will end up like me - a loser at a lousy movie with the loathsome task of warning others about it.

There are movies with no script, no screenplay, no sense and no sanity, the ones that our editor likes. No big deal. We at fullhyd.com watch such movies all the time. Oh shoot, this darn movie doesn't even have popcorn and coffee! The snack vendors at the theater took a day off from work presuming that there would be nobody dim enough to watch this movie. Little do they know about me.

Hi-Tech Students has three disjointed parts joined together with the help of the beginning, the intermission and the end. Part I goes zit, Part II goes zoom and we have no idea where part III went.

Part I is about five blokes struggling to go the US, only they ain't got enough money to reach the passport office. However, they manage to send one among them to the US.

Part II is a mysterious girl landing at the guys' pad and ordering around things. Nobody knows who she is or what she wants, but they all humor her. Like rats in the Pied Piper fable, they simply indulge her and dance to her tunes without questioning her.

Part III is this mysterious girl announcing that she is the wife of the guy who is in the US and that she wants to give birth to her child in the home where her husband's buddies live. Whaaaattttttt? Did you ask what??? ^&%^$$##*#??? I asked the same question aloud, but the final credits came on screen and they announced the end. I felt like the doc performed a frontal lobotomy on my brain.

Obviously pages 6 to 18 of the script book went missing, but none of the crew noticed it and went ahead to make this disaster. Nobody ever heard of a woman wanting to have her child in the midst of her hubby's pals unless she was mentally ill. And her excuse is that she wants her child to grow up in India where people love each other and treat friends as their own brothers. Awwww!

Even Kalia The Crow in Tinkle has a better plot than Hi-Tech Students. And Chamataka and Doob Doob have better expressions than the blokes in the movie. Sai Kiran and Akash seem to have reached the heights of unconscious incompetence in acting. It would be rude to compare the girls in the film to lampposts on a road. But then I choose to be rude.

The final word is: Forward this to 10 friends. You don't deserve my fate!
Share. Save. Connect.
Tweet
HI-TECH STUDENTS SNAPSHOT

ADVERTISEMENT
This page was tagged for
Hi-Tech Students telugu movie
Hi-Tech Students reviews
release date
Sai Kiran, Akash
theatres list
Follow @fullhyderabad
Follow fullhyd.com on
About Hyderabad
The Hyderabad Community
Improve fullhyd.com
More
Our Other Local Guides
Our other sites
© Copyright 1999-2009 LRR Technologies (Hyderabad), Pvt Ltd. All rights reserved. fullhyd, fullhyderabad, Welcome To The Neighbourhood are trademarks of LRR Technologies (Hyderabad) Pvt Ltd. The textual, graphic, audio and audiovisual material in this site is protected by copyright law. You may not copy, distribute, or use this material except as necessary for your personal, non-commercial use. Any trademarks are the properties of their respective owners. More on Hyderabad, India. Jobs in Hyderabad.