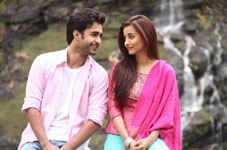 Josh / fullhyd.com
EDITOR RATING
5.5
Performances
Script
Music/Soundtrack
Visuals
8.0
5.0
5.0
6.0
Suggestions
Can watch again
Yes
Good for kids
Yes
Good for dates
Yes
Wait for OTT
No
A 5.5 on 10 often represents an okayish film, but sometimes it can mean more. In the case of Baankey Ki Crazy Baraat, it means that there are some pretty sad things, some okay things, and, importantly, some absolutely great stuff in the movie.

We'll start with the bad stuff. Baankey Ki Crazy Baraat has a ludicrous and smugly unethical plot. Baankey (Rajpal Yadav) is a 36-year-old man who's desperate to get married. To this end, he indulges in antics like a 100-day Kamdev Puja which has him take weird postures while being topless and adorned with jasmine flowers (all out in the open, mind you). Clearly, the man will stop at nothing to get married. And the extent he chooses to go to is rather stomach-turning.

Baankey's priest declares that he has a dosh in his kundli and therefore should never get married. After a bit of arm-twisting by Baankey's good friend Lallan (Vijay Raaz) and uncle Kanhaiyalal (Sanjay Mishra), the priest finds a way to circumvent this dosh by basically getting someone else to marry the girl (Tia Bajpai as Anjali), and then bring the girl to live with Baankey.

If you thought this was absurd, your eyes will pop when you gather how they go about achieving this scheme. They simply don't tell the girl's family about their dubious plan, and get a substitute (Satyajit Dubey) to act as Baankey till the wedding gets over. How is that ethical or why would the girl continue to stay when she gets to know of the outrageous con, we don't have any answers for.

Not helping matters is how the hero Virat (Dubey) is an irresponsible lout whose idea of fun is getting drunk on the road. Anjali falls in love with him when she thinks he's the groom. But after realising that the whole thing was an elaborate scheme and that Virat was very much a part of this con, she still continues to go for him. Why, we will never know.

Next, the okay stuff. What's just about passable in the movie is the filmmaking. It's quite old school. Good direction in an age was largely about creating reasonably impactful scenes and getting them to segue well in the sequence. Today we're used to a number of frills like non-linear narratives, short edits, sudden slow-mo effects etc. In fact, direction sans these frills seems plain and uninteresting. Aijaz Khan's approach is pretty linear and straightforward, and so you may find yourself indifferent to the proceedings on screen at times.

Baankey...'s script primarily relies on the "bunch of quirky characters in a bizarre situation" template, and does a good job of it. Once again, the quirkiness of the characters isn't played up too much, and can feel a bit too less for an audience used to movies like Fukrey. However, thankfully, the comedy is largely clean - you can safely go with your family (there is a sore point or two, but nothing extreme and definitely not explicit). The music and visuals fare a tad better. The tunes are pleasant and the frames pretty. The editing, like the direction, is quite functional and nothing to complain about.

With that, we finally come to the good parts. The performances. Vijay Raaz and Sanjay Mishra are absolutely superlative. Following on their heels is Rajpal Yadav. These are tremendously capable actors who are, sadly, routinely given undercooked material. In an alternate universe maybe they are getting work that they deserve, but back home we should be happy they at least get Baankey Ki Crazy Baraat. The script offers them sufficient meat, and they come up with wondrous results.

Sanjay Mishra is effortless as the grouchy but amusing loanshark Kanhaiyalal. Adamant on one end but hard-pressed on the other, his character is a complete joy to watch. Rajpal Yadav's Baankey reeks of desperation. It's a sad character when you think about it, but he manages to make you laugh, and sometimes you wish the poor fellow would just get married. And the one who completely stands out is Vijay Raaz as Lallan, Baankey's friend and official troubleshooter. Raaz pulls off desi suave like perhaps no one else can.

The rest of the cast, too, is very good. Particularly, Anil Mange (you may remember him as the blue painted Lord Shiva from PK) is hilarious as the jilted lover who's keen on stopping the wedding. The hero Satyajeet Dubey is charming, and apart from his characterisation, he pretty much passes muster. The pleasant surprise is Tia Bajpai who looks pretty as is expected of a Hindi film heroine but also manages to put in a rather convincing performance. More so, her Anjali comes off as a likeable person and makes you worry for her.

So there. By itself, Baankey Ki Crazy Baraat would be a ordinary film that you could catch on TV eventually. But with the strength of the cast who are practically alchemists, it positions itself as a more significant movie. If you are the sort who can tune out of the not-so-great parts, Baankey... can be a richly satisfying experience. You just need to watch Vijay Raaz wrap a scarf around his neck as he enters a house and you'll know what we are talking about.
Share. Save. Connect.
Tweet
BAANKEY KI CRAZY BARAAT SNAPSHOT 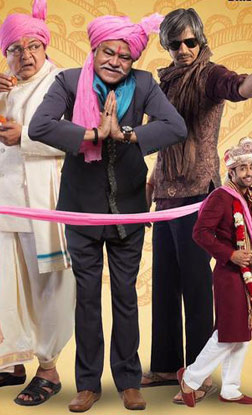 ADVERTISEMENT
This page was tagged for
baankey ki crazy baraat movie in kickass
the baankey ki crazy baraat movie
Baankey Ki Crazy Baraat hindi movie
Baankey Ki Crazy Baraat reviews
release date
Follow @fullhyderabad
Follow fullhyd.com on
About Hyderabad
The Hyderabad Community
Improve fullhyd.com
More
Our Other Local Guides
Our other sites
© Copyright 1999-2009 LRR Technologies (Hyderabad), Pvt Ltd. All rights reserved. fullhyd, fullhyderabad, Welcome To The Neighbourhood are trademarks of LRR Technologies (Hyderabad) Pvt Ltd. The textual, graphic, audio and audiovisual material in this site is protected by copyright law. You may not copy, distribute, or use this material except as necessary for your personal, non-commercial use. Any trademarks are the properties of their respective owners. More on Hyderabad, India. Jobs in Hyderabad.