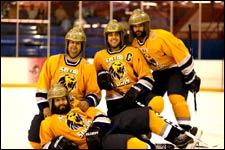 Nupur Barua / fullhyd.com
EDITOR RATING
6.0
Performances
Script
Music/Soundtrack
Visuals
8.0
6.0
7.0
7.0
Suggestions
Can watch again
Yes
Good for kids
Yes
Good for dates
Yes
Wait for OTT
No
Akshay Kumar has been in the news recently for all the right reasons. From Khiladi to producer, the man has come a long way. When he launched Hari Om Entertainment, the production company named after his father, about 3 years ago, the actor vowed to give new talent a chance, and his latest offering, Speedy Singhs (also known as Breakaway) is a continuation of that promise.

Speedy Singhs is about Rajveer Singh (Vinay Virmani), a young Canadian Sikh who daydreams of being included in his city's best ice hockey team, the Hammerheads. His father (Anupam Kher) cannot understand his son's obsession with the sport, and lectures him daily on how lucky his son is to be working in his uncle's truck company. The relationship between father and son soured a few years ago, when an adolescent Rajveer chopped off his locks so as not to feel out of place in the land of the white man.

Rajveer does, however, manage to skate around at the local rink, playing with some childhood friends (all of Indian Sikh origin). When the Hammerheads, the champion team that has been winning the Hyundai Awards for 4 years, pass comments on Rajveer, his friends, their race and their game, he decides to form his own team.

Dan Winters (Rob Lowe), who manages the stadium, is impressed with their gumption, and agrees to become the coach. Dan was a reputed player in his youth, says his younger sister Melissa (Camilla Belle), who is studying to be a lawyer, and whom Rajveer is immediately infatuated with (complemented by a fantasy song in which both are skating around on ice in front of a bluish Taj Mahal).

Rajveer's father has forbidden his son from playing ice hockey, ever, so Rajveer fails to inform him that he is the captain of the new Indian team called the Speedy Singhs, named after Rajveer's uncle's truck services company that is now sponsoring their uniforms and other essentials.

As most sports-related movies have shown us over the years, the underdogs will succeed in the end. However, Speedy Singhs cannot really be slotted in the sports genre. Admitted that it is all about ice hockey and the honour of the Sikhs, but it is mostly about Rajveer's struggle to maintain his identity without losing his pride. He does not seem too depressed or confused, just irritated.

Vinay Virmani as Rajveer is a treat to watch. He smiles through most of the movie and, as Rajveer, is also arrogant about his own belief in his talent.

All the actors in the movie stand out, and there is not a single bad performance. Anupam Kher, the first choice for an NRI father, is terrific. Sakina Jaffrey, who plays Rajveer's mother, is a delight, as is the lady who plays Uncle Sammy's wife. Even the little boy who plays Rajveer's brother is a good actor, and one waits to see more of him.

The Speedy Singhs themselves are fantastic. They are not loud, nor lecherous, nor exasperating - they are just normal human beings. Rob Lowe does look a little dazed, as does Camilla Belle. Russell Peters is predictably funny, and so is Gurpreet Ghuggi.

Robert Lieberman seems to concentrate more on the alienation that Canadian Sikhs experience than on the game itself. The qualifying rounds are conveniently shown in a montage, mostly of the score boards. Some issues, such as the helmet regulation are brought up and then discarded abruptly. Racism in Canada may not be as huge as it is made out to be, but then, it is never really explained.

The producers, however, have not left any stone unturned to make Speedy Singhs watchable fare. From one-liners by Russell Peters to Anupam Kher's tirade against his neck tie, the movie ensures that you laugh every 2 minutes. However, since this is an English movie, they could have sub-titled the Punjabi dialogues so non-Punjabis can get the flow of the humour.

Despite being patchy in parts, Speedy Singhs deserves a watch by movie-goers of all ages. And the cameos by Chris 'LUDACRIS' Bridges, Aubrey 'DRAKE' Graham, and, of course, Akshay 'KHILADI' Kumar might keep you rooted to your seat till the screen goes blank.
Share. Save. Connect.
Tweet
SPEEDY SINGHS SNAPSHOT

ADVERTISEMENT
This page was tagged for
hotels in canada speedy.com.ar
Speedy Singhs english movie
Speedy Singhs reviews
release date
Vinay Virmani, Russell Peters
Follow @fullhyderabad
Follow fullhyd.com on
About Hyderabad
The Hyderabad Community
Improve fullhyd.com
More
Our Other Local Guides
Our other sites
© Copyright 1999-2009 LRR Technologies (Hyderabad), Pvt Ltd. All rights reserved. fullhyd, fullhyderabad, Welcome To The Neighbourhood are trademarks of LRR Technologies (Hyderabad) Pvt Ltd. The textual, graphic, audio and audiovisual material in this site is protected by copyright law. You may not copy, distribute, or use this material except as necessary for your personal, non-commercial use. Any trademarks are the properties of their respective owners. More on Hyderabad, India. Jobs in Hyderabad.