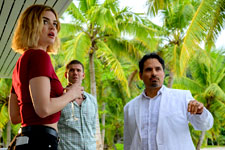 Chaitanya Karthik / fullhyd.com
EDITOR RATING
1.5
Performances
Script
Music/Soundtrack
Visuals
2.0
1.0
2.0
1.0
Suggestions
Can watch again
No
Good for kids
No
Good for dates
No
Wait for OTT
No
Hollywood seems to be having a dearth of novel ideas. What else would explain its desperate fascination for rebooting movies or TV series from the past? It'd be a different story if the movies that they're making take the essence of the original and put a modern spin on it, but sadly that's not the case with a majority of the reboots. Fantasy Island belongs to this very flock.

The movie begins with five "lucky" guests on a plane heading for a mysterious island, where they're greeted by their host, Mr. Roarke (Michael Peña). Mr. Roarke promises them the fulfillment of their deepest desires and that sets the tone for the "be careful what you wish for" theme that forms the crux of the story.

The main characters we have here are brothers Bradley (Ryan Hansen) and Brax (Jimmy Yang), police officer Patrick (Austin Stowell), Melanie (Lucy Hale) and Elena (Maggie Q). Each of these five persons has their own set of fantasies, and because this is a horror movie, you know that their fantasies are their stairways to doom.

Bradley and Brax want to party like it's their last day on earth, and they're escorted to a mansion the inside of which screams "debauchery", which is precisely what the brothers desire. Elena is a quiet woman living with the regret of rejecting a man she believes she should have married five years ago, and she gets transported to the night he proposed to her.

These two scenarios at least give you an inkling that it'll be a while before things start going downhill. But the other two don't take long to call upon disaster. Patrick's father was a soldier who was a hero, and having grown up in his shadow, Patrick's deepest desire is to enlist in the Army. But he's arrested right off the bat by soldiers thinking he's a spy. Melanie, who wants to exact revenge on her high school bully, finds herself in a torture-porn scenario, wherein she ends up rescuing her bully from certain death.

The director's idea here is that as and when the stories exit the realm of fantasy and enter the land of danger, these people find themselves involved in each other's scenarios. How they deal with it, which is underwhelming at best and mostly comes across as meaningless, forms the rest of the story.

You'd expect that for a premise like this, you'd start feeling concerned for the characters once they start regretting the whole idea of their desires manifesting themselves. But that hardly happens. The actors look like they're trying too hard to ignore the fact that they're part of a project like this, their embarassment at times visible. The characters all behave in a particular way, and there's a twist in the movie that was incorporated into the script for the sole purpose of making the viewers go "Holy Shit!" But the reveal isn't organic, and the characters' behavior before and after seems like we are dealing with a different set of people. The result of this is a warranted resentment for the actors who chose to involve themselves with this movie.

The characters discuss how the island is managing to turn dreams into reality, and they come up with hypotheses like holograms, induced hallucinations, virtual reality et al, but because we've had a surplus of movies with similar plots, you know that there is a sinister and a supernatural undertone. Naturally, a reasonable expectation you would have is that the dark turns that the story will take will manage to induce a few scares and make you flinch in fear. But in Fantasy Island, the only thing that scares you is the thought of sitting through the whole movie without losing your touch with reality. The chills that you expect seem like they are there and will dawn upon you any moment, but no, they do not exist, and therefore never show up. If anything, the movie is funny, especially when it's not pretending to be one.

There isn't any department of the movie that can claim to have done a good job. Most of the money invested in the film seems to have gone into creating the locale the story is set in - once you're done admiring the beauty of the place, you're done with the visual craftsmanship of the movie. The effects that have been used are pretty bad, and you wonder how scenes employing such undercooked effects even manage to make the cut.

The editing could have been much better because the runtime of 110 minutes feels way longer than it actually is. Maybe a better idea would've been to turn this into a TV series instead of adapting it into a movie. The background score too feels mediocre, and does absolutely nothing to create the tension or the intrigue that the movie like this promises.

The ending scene of Fantasy Island gives you the impression that a sequel is in store, and considering that this is based on a TV series with the same title, there might be many - and that thought is scarier than the movie.
Share. Save. Connect.
Tweet
FANTASY ISLAND SNAPSHOT 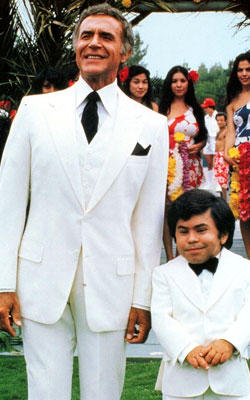 ADVERTISEMENT
This page was tagged for
Fantasy Island english movie
Fantasy Island reviews
release date
Michael Pena, Maggie Q
theatres list
Follow @fullhyderabad
Follow fullhyd.com on
About Hyderabad
The Hyderabad Community
Improve fullhyd.com
More
Our Other Local Guides
Our other sites
© Copyright 1999-2009 LRR Technologies (Hyderabad), Pvt Ltd. All rights reserved. fullhyd, fullhyderabad, Welcome To The Neighbourhood are trademarks of LRR Technologies (Hyderabad) Pvt Ltd. The textual, graphic, audio and audiovisual material in this site is protected by copyright law. You may not copy, distribute, or use this material except as necessary for your personal, non-commercial use. Any trademarks are the properties of their respective owners. More on Hyderabad, India. Jobs in Hyderabad.