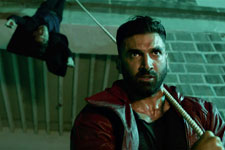 Chaitanya Karthik / fullhyd.com
EDITOR RATING
3.0
Performances
Script
Music/Soundtrack
Visuals
6.0
3.0
7.0
7.0
Suggestions
Can watch again
No
Good for kids
No
Good for dates
No
Wait to rent it
No
For some reason, Mohit Suri seems to revel in the idea of revenge and a protagonist whose life resonates with downward spiral. Also, he has great taste in music, and the hits he has delivered so far piggyback on the songs in those films, which cannot really boast of having great scripts.

Once again, in Malang, you have a protagonist whose life has taken a dark turn and who is lusting for revenge. Once again, you have great songs that you want to hum for a while. And once again, you don't have a great script.

Malang opens with Advait (Aditya Roy Kapur) beating the crap out of a bunch of fellow prisoners. The camera reminds you that you're supposed to be focusing on his body instead of the actual proceedings, and this is a subtle sign of what you need to brace yourself for for the rest of the movie.

Advait is out seeking revenge and his victims are all policemen - a hint that we are dealing with corrupt cops here. Two cops, Agashe (Anil Kapoor) and Michael (Kunal Khemu), are working on the case, and both of them are at odds when it comes to the idea of serving justice. Agashe is the cop who loves snorting and pulling the trigger whenever he can, and spits in the face of rules, while Michael is the sincere, play-by-the-rules officer.

The story constantly alternates between the present and the past. In the present, you have Advait trying to hunt down the people who wronged him, and the police trying to nab him. In the past, you have Advait romancing Sarah (Disha Patani). Both Advait and Sarah have left their homes and are on the lookout for some adventures. They meet at Goa where their love blossoms, and eventually Sarah gets pregnant. It is after this that things start going awry, as one thing leads to the other and finally Advait ends in prison. You don't have to be a genius to figure out that that mess blows itself in Sarah's face.

In case you still want to watch the movie to understand how all the scattered pieces of the puzzle come together, our suggestion is to stay at home. You'd save yourself a good deal of trouble if you choose to confine yourself to your palank instead of watching Malang.

To be fair, Malang has a decent premise, and the characters in this film, except for Sarah, are multi-dimensional. One would expect these characters to drive the story, but that hardly happens, and you find it tough to be invested in anybody. Advait is portrayed as the free-spirited idiot. You don't get to see why he packs everything and decides to indulge in wanderlust. He never comes across as a smart guy. In most of the conversations between Sarah and Advait, she keeps asking hard-hitting, existential questions, and all of his answers are dumb. How someone as smart as her could fall for a guy whose IQ should probably be kept a secret, beats me. Looks would be a probable answer, but in that case Sarah would be the shallow one, which she isn't, and therefore the inconsistency in the character.

After Advait gets her pregnant and she says that she doesn't want to abort the baby, he just leaves her. Sarah doesn't even have a phone. He just leaves like the idiot that he is. Somewhere towards the end of the story, you get to know that Advait has commitment issues because his parents are separated. By this point you'd have run out of frisbees to give. Of course, you don't have to reveal everything early on in a movie touted to be a suspense thriller, but that doesn't mean you conceal the very information that'd have made the character interesting in the first place.

Aditya Roy Kapur is fine in his role, given its nature, though he still has a long way to go before he can establish himself as a bankable actor. Disha Patani has a meaty part but the makers chose to focus on her glamour more than the character she portrays. Anil Kapoor's is the best performance, with a character dealing with his own demons and always resorting to drugs and killing to keep him from going insane. Kunal Khemu has a very weird character arc that makes you cringe. Again, it was a character with a lot of potential, but lazy writing ruined it.

The screenplay of the movie which should have been its strength turns out to be a drawback. A non-linear narrative should engage the viewer by tantalizing him/her with the eventual unraveling of the plot. Malang's screenplay ensures that you're frustrated and become indifferent to what's happening. The narrative is supposed to shift once you've taken the bait and are engaged, but in this movie the shift happens even before you begin to care.

Also, there are songs placed everywhere. It feels like there are about 50 songs in the movie and about 30 scenes, and like the story has been written to accommodate the songs and not the other way around. They take the focus away from the story and make you dread them. That is sad considering that the songs are actually good.

The cinematography is decent, although it focuses mostly on the bodies of the protagonists and the beauty of Goa. But in the scenes where all the action happens, the filming seems lacking.

Malang's tagline is "unleash the madness", but it should have been "stairway to madness".
Share. Save. Connect.
Tweet
MALANG SNAPSHOT 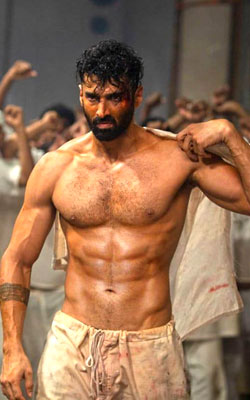 See Malang full details
MALANG USER REVIEWS
1 - 2 OF 2 COMMENTS
POSITIVE  |  NEGATIVE |  NEWEST  |  OLDEST  |  MOST HELPFUL  |  LEAST HELPFUL
USER RATING
4.0
1 USER
Performances
Script
Music/Soundtrack
Visuals
NA
NA
NA
NA
Can watch again - NA
Good for kids - NA
Good for dates - NA
Wait to rent it - NA
Kanye on 17th May 2020, 12:27am | Permalink
Just watched this movie on Netflix, and I can't sugarcoat it - it's bad. For some reason I got the vibe that the makers were trying to desensitize us to LSD and weed. 95% of the flashback sequence had the lead pair hopped up on drugs and had them waltz around like they were in a Bahamas tourism ad. It just seemed unnatural and I don't know when or how they "fell in love". The music was trippy and gelled well with the premise, though.

I absolutely hated the character arcs. Advait is essentially a child and his transformation to a killer was shown in 5 minutes wedged in the middle of a song. Why he was cackling like a maniac at the end, I don't understand. Sara has a substantial role but it's the role we already saw in Ghajini and in Ek Villain. It doesn't help that Disha has half the energy of a Asin or a Shraddha. The main villain's intention was just weird. And coming to Anil Kapoor, his role was great. But I was disappointed too. Why can't we just have a grey character? Does the character HAVE to have an emotional backstory that makes you say "oh he's got a reason."

ADVERTISEMENT
This page was tagged for
Malang hindi movie
Malang reviews
release date
Aditya Roy Kapoor, Disha Patani
theatres list
Follow @fullhyderabad
Follow fullhyd.com on
About Hyderabad
The Hyderabad Community
Improve fullhyd.com
More
Our Other Local Guides
Our other sites
© Copyright 1999-2009 LRR Technologies (Hyderabad), Pvt Ltd. All rights reserved. fullhyd, fullhyderabad, Welcome To The Neighbourhood are trademarks of LRR Technologies (Hyderabad) Pvt Ltd. The textual, graphic, audio and audiovisual material in this site is protected by copyright law. You may not copy, distribute, or use this material except as necessary for your personal, non-commercial use. Any trademarks are the properties of their respective owners. More on Hyderabad, India. Jobs in Hyderabad.