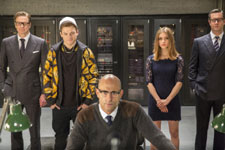 Swayamsrestha Kar / fullhyd.com
EDITOR RATING
7.0
Performances
Script
Music/Soundtrack
Visuals
7.0
6.0
6.0
8.0
Suggestions
Can watch again
Yes
Good for kids
No
Good for dates
No
Wait to rent it
No
There is a certain charm to a well-tailored suit, especially if the guy wearing it can murder a roomful of people - and by murder we mean stab, shoot, slice, and in general orchestrate a danse macabre - and still emerge unscathed without so much as a crease on said suit. Even 007 Barney Stinson's clothes give out after a while and start looking a little puckered.

But apparently, a Kingsman's suit is made of stronger stuff. Nah, it's nothing as common as titanium (a la Iron Man), but something much harder to find - style. Loads and loads of style, topped with generous helpings of suave, mixed in with a hint or two of old-world rakish swagger. Accessorise all this with an umbrella, and you've got your average Kingsman.

More than being a spy thriller - the title says "the secret service" for crying out loud! - the film is a lesson in sartorial weaponry, and not like in the Transporter movies where Jason Statham actually uses pieces of his clothing to whip baddies into shape. It is a lesson in waging war on the shabbily dressed dregs of humanity (who happen to be pretty much all others who haven't been recruited by the Kingsman).

Based on a comic book by Dave Gibbons and Mark Millar, Kingsman: The Secret Service is about a secret spy agency whose members are rich influential gentlemen (we can't tell you how often this word crops up in the movie) who quietly and discreetly rid the world of its scum, stock their armouries with everything ranging from bullet-proof umbrellas to gold-plated lighters that double up as hand grenades, and dress up in the most dapper suits known to mankind, all in a day's work.

The film starts with the Kingsmen being rescued by the heroic sacrifice of one of their agents, and as a gesture of appreciation, agent Galahad aka Harry Hart (Colin Firth) visits the deceased agent's family and stumbles upon the agent's son, young Eggsy (Taron Eggerton). Galahad gives the kid a medal and asks him to call on the number inscribed at the back of the medal during times of trouble.

Seventeen years later, Eggsy has grown up to be a troubled teenager who hovers on the edges of a dysfunctional family, stopping on his reckless rampage through life only to indulge in petty theft and general juvenile aimlessness.

Meanwhile, one of the Kingsman agents, code-named Lancelot (Jack Davenport), gets killed during a rescue mission for climate scientist James Arnold (Mark Hamill) who has been kidnapped by the internet billionaire and fledgling eco-terrorist Richmond Valentine (Samuel Jackson).

Valentine believes that humanity is a deadly virus which has infected the planet, and that he is the messiah who will scourge this plague and restore Mother Nature to her usual state of bountiful order and abundance. To complete this rosy picture, he is aided by a woman called Gazelle (Sofia Boutella) whose prosthetic legs double up as lethal blades during a duel. Add to this a lisp and a misguided fondness for bling and Macdonalds, and you have a brand new kind of thug. The Kingsmen are all that stand in his way.

To fill up Lancelot's post, Galahad puts forth Eggsy as his candidate. The rest of the aspiring knights comprise of elite Ivy League gentlemen and ladies who scoff at the newest addition to their team because the only thing that rich snobbish people hate more than poor people is poor people who are obviously better than rich snobbish people. Duh.

Valentine plans to take over the world by letting people fight each other to death. He hates getting his own hands bloodied, you see, and he even has trouble watching when Galahad, under the influence of synthetic hormone implants in SIM cards (beware all you millenials who are glued to your smartphone screens, technology will be our downfall!), massacres everybody in a church.

It is up to the Kingsman to stop his plan and save the day, and then, if luck permits, discuss art over a vintage glass of wine (okay, we are kidding about the last part).

Kingsman's director Matthew Vaughn is an expert in making a certain kind of movie - one which tries to avoid all the dominant tropes that afflict pop culture narratives, one which is packed with both stylised (to the point of being edified) as well as appropriately gory violence, and most importantly, one which parodies the genre that it actually belongs to. What else do you say about a guy who had the guts to show a pre-teen girl being punched left, right and centre by a mob boss (Kick-Ass)?

The Kingsman too is an entertaining introduction to the world of Matthew Vaughn movies where the good guys indulge in as much bloodshed as the bad guys, and do so while having a lot of fun.

The film parodies James Bond to the point where it actually acts as a fractal representation of that genre. It is the kind of movie which makes young scruffily dressed men sit up and straighten their collars, and wish for a pair of Oxfords which project knives when tapped together, a la Dorothy from Wizard Of Oz.

Colin Firth plays his part beautifully, which is what he does pretty much all the time. He utters dry witticisms in clipped British tones, and shows how good he could have been if anybody had bothered to cast him as Bond. Samuel Jackson is gleefully evangelically evil, like a little kid let loose in a candy shop.

Taron Eggerton starts out shakily, but gains confidence as his character develops under the guidance of Galahad. He is the misfit, and by the end, he fits in quite beautifully.

The film, while trying to escape the bog of mediocrity that might have swallowed lesser movies, makes some really entertaining visuals. You'll especially enjoy that scene where everybody's head explodes into swirls of pyshedelic colours. Literally.

And that's all you need to know about Kingsman.
Share. Save. Connect.
Tweet
KINGSMAN: THE SECRET SERVICE SNAPSHOT 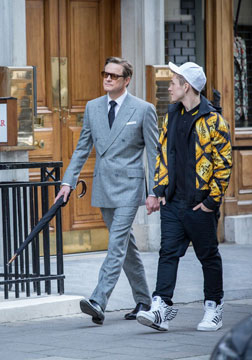 ADVERTISEMENT
This page was tagged for
Kingsman: The Secret Service english movie
Kingsman: The Secret Service reviews
release date
Colin Firth, Mark Strong
theatres list
Follow @fullhyderabad
Follow fullhyd.com on
About Hyderabad
The Hyderabad Community
Improve fullhyd.com
More
Our Other Local Guides
Our other sites
© Copyright 1999-2009 LRR Technologies (Hyderabad), Pvt Ltd. All rights reserved. fullhyd, fullhyderabad, Welcome To The Neighbourhood are trademarks of LRR Technologies (Hyderabad) Pvt Ltd. The textual, graphic, audio and audiovisual material in this site is protected by copyright law. You may not copy, distribute, or use this material except as necessary for your personal, non-commercial use. Any trademarks are the properties of their respective owners. More on Hyderabad, India. Jobs in Hyderabad.