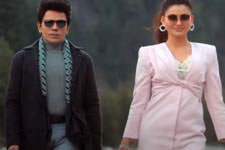 T J Reddy / fullhyd.com
EDITOR RATING
2.0
Performances
Script
Music/Soundtrack
Visuals
3.0
1.0
5.0
5.0
Suggestions
Can watch again
No
Good for kids
Yes
Good for dates
No
Wait for OTT
Yes
I have a confession to make. When my overlords at fullhyd.com asked me to review a movie for the weekend, they presented me with three choices. I chose this film of my own volition. The reason for it was that I'd heard about the man (Arul Saravanan), the myth (his TV ads), and the legend (the title of the film) a few times. The trailer for his cinematic debut had me hooked. There was no way any other movie would wrestle my attention from this seemingly unstoppable trainwreck.

As I sit here and type this review, how I wish I'd made better choices with my life. How I hope I did not have an addiction to cringe. I yearn to have a mind that did not like a man with no self-awareness. I don't ask for much; I only ask for a better brain that houses better thoughts.

If there was one rule I gave myself while indulging in THE LEGEND's first few minutes, it was to refrain from making light of the leading man's physical appearance. That is low-hanging fruit, and if anyone is going for those with their writing, it would be JD and Jerry, the writers/directors of this film.

So, what is the legend of THE LEGEND? THE LEGEND stars (and is produced by) THE LEGEND Arul Saravanan, the owner of THE LEGEND Saravana Stores. At the age of 51, he chose to make a feature-length ad for his retail establishment. A la his ten-floor store that sells everything from jewelry to footwear, his movie has an all-in-one offering of various scenes and plot points from multiple films.

The plot follows Saravanan (played by THE LEGEND Arul Saravanan, lest we forget), and his life and times at getting a cheap cure for diabetes to market. Attempting to thwart his noble efforts is the ignoble VJ (Suman), a kingpin of the medical mafia. Over nearly 2 hours and 45 minutes, you understand that VJ isn't a match for our hero. VJ is just a crony capitalist, murderer and human trafficker.

But THE LEGEND is a man of many talents. He is a scientist, a master of tai-chi, a medical researcher, a philosopher, a dancer, a man proficient in the bedroom, and so much more. A perfect man like him has no issues he can't solve with some de-aging technology and an item song from a known actress.

Words cannot describe the sheer horror I felt when watching THE LEGEND starring THE LEGEND. I went in expecting a cringefest but came out experiencing a colossal bore-fest. Once the creepy marionette de-aged leading man and his CG-lighter shade of skin colour stop tickling your funny bone, the film becomes a never-ending chore to get through. You could watch scene after scene and play "a game" of identifying the original until time stops.

But as you settle into an eternity of a movie quiz that you did not sign up for, a sudden flash of uncanny valley CGI appears out of nowhere to shake you from your slumber. Multiple shots of THE LEGEND running show us a man whose head seems independent of his torso, which in turn seems independent of his legs. A scene of THE LEGEND, dressed in white, battling a hall of goons turns the dial on the uncanny valley metre so hard that the knob breaks, and you scream at the screen "Why are you doing this to me?" in befuddlement.

But we know why this film exists. The age-old maxim, "The strong will do what they can, and the weak will suffer what they must", rings with each passing second. THE LEGEND has his money and resources, and wants to bring all his rich and famous friends together to make you believe that he is the best man in existence, and that his store is the best establishment on the face of the earth.

But little does he know the nuances of why an actor like Dhanush began his career with Thulluvadho Ilamai and Kaadhal Kondein. It took Dhanush 25 films and a National Award win before he made Raghuvaran B. Tech. You start by playing to your strengths and acquiring more as you go along. Not everyone can be Rajnikanth from film one. That charisma comes from within and isn't available behind THE LEGEND Saravana Stores' counters.

The supporting cast of actors deserves massive applause for essaying their roles with a straight face, but who are we kidding? These actors have years of service working on multiple star/director/producer-driven ego-trip dumpster fires. This assignment isn't a new one for any of them. They come in, do a job, collect their paychecks, and see themselves out. However, the fact that (barring another surprise release) this is Vivek's final on-screen role stings more than a little.

Speaking of stingers, the veteran cinematography and composer duo of Velraj and Harris Jayaraj try their damndest to save this film with immense care and skill. To his credit, barring a few shockingly horrible green screen shots, THE LEGEND spares no expense in providing resources for his crew. Clearly inspired by Shankar films of old, the grand scale production of this movie makes for a smooth visual experience more often than not. But then again, all this time, talent and resources are being set ablaze at the altar of one man's ego and meme-lord infamy.

If a benevolent God is listening to my prayers via this review, I would ask to amend my earlier wishes. Oh Lord, if you cannot grant me a better brain, please bestow upon me the sheer brass balls of THE LEGEND. As the kids would say, I "God Promise" that I'm not making fun of him. I'm in awe of one of your most unique creations. To experience life with his mindset would be phenomenal. All my doubts, fears and anxiety would be gone. And they would be replaced by a lack of self-awareness. If I cannot register my negatives, I would have no flaws. I would be a legend too. I am content with being a legend and not THE LEGEND. Because being the latter requires me to be born a legend. 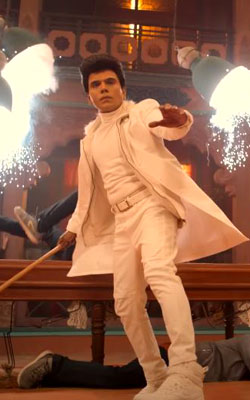 ADVERTISEMENT
This page was tagged for
The Legend telugu movie
The Legend reviews
release date
Arul Saravanan, Urvashi Rautela
theatres list
Follow @fullhyderabad
Follow fullhyd.com on
About Hyderabad
The Hyderabad Community
Improve fullhyd.com
More
Our Other Local Guides
Our other sites
© Copyright 1999-2009 LRR Technologies (Hyderabad), Pvt Ltd. All rights reserved. fullhyd, fullhyderabad, Welcome To The Neighbourhood are trademarks of LRR Technologies (Hyderabad) Pvt Ltd. The textual, graphic, audio and audiovisual material in this site is protected by copyright law. You may not copy, distribute, or use this material except as necessary for your personal, non-commercial use. Any trademarks are the properties of their respective owners. More on Hyderabad, India. Jobs in Hyderabad.