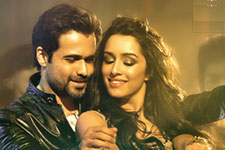 Nupur Barua / fullhyd.com
EDITOR RATING
5.0
Performances
Script
Music/Soundtrack
Visuals
5.0
4.0
5.0
6.0
Suggestions
Can watch again
No
Good for kids
No
Good for dates
Yes
Wait to rent it
No
Ungli, as in finger, refers here specifically to the middle one - the one we love to use as a means of communication. The title plays with the idea that it is only by showing the aforementioned appendage to society that we can rectify everything that is wrong with it (society, that is). This is obviously after years of knowing that there is no straightforward way to get things done.

The film features four "youngsters" (Neil Bhoopalam, Angad Bedi, Kangna Ranaut, Randeep Hooda) who have no intentions of disrupting their busy lives to become vigilantes till their gym trainer (Arunoday Singh), the one person they have in common, is made a victim of circumstances. All because he tried to help out somebody in need. His sister Maya (Kangna Ranaut) and the other three decide to ask a few questions, and then take the law into their own hands.

These self-proclaimed vigilantes kidnap the corrupt, torture them, and send out videos of their activities to various media houses. This is, of course, an embarrassment to the police commissioner (Raza Murad), and he puts his best man, ACP Kale (Sanjay Dutt), on a hunt. Kale in turn enlists the help of a rather unconventional police officer, Nikhil (Emraan Hashmi). And Nikhil discovers that he is more sympathetic to the Ungli cause than to his own department.

The law needs to be upheld, naturally, and therefore Nikhil will have to be the one to make the changes. That is why he is the hero of this entourage cast of characters. What, however, will happen to the youngsters who want to make this world a better place? To find out, you have to watch Ungli.

The biggest drawbacks of the movie are its dialogues. There is no excuse for the inanity that prevails in the lines mouthed by all the characters. Some of the lines make you cringe, and others make you want to beat someone up. Indeed, the dialogues by Milap Zaveri singlehandedly destroy what could have been a fun movie with a message.

Not that logic in the script is very strong, either, but then, there is always willing suspension of disbelief. Yet, even if you overlook the fact that the youngsters are all in their 30s, and that Nikhil himself is rather immature to be a cop, some of the plot points seem too bizarre. You can see the "inspiration" from various Hollywood films.

The humour is somewhat forced, maybe because the actors are not very enthusiastic about the story in general. The screenplay leaves you with the impression that the writers were quite amateurish in their approach.

There is a message here, though. The common man has suffered enough, and it is time to make your voices heard. Not that the solutions offered here are practical, but still, the film can make you sit up and think about your own complacency. In that sense, Rensil D'Silva has the right intentions.

Kangna Ranaut, who is hardly in the movie, looks happy enough to leave the others to hog the limelight. This must be another film she had to do to keep her kitchen running, before she finds something more up her street and calibre. Neha Dhupia, on the other hand, has a more interesting role, although she does come across as a bimbette.

Neil Bhoopalam and Angad Bedi seem a little lost, but are still the most sincere of the lot. Randeep Hooda throws his deep voice around and gets away with it - and with his insolent expression. Emraan Hashmi just has a badly written role. As for Sanjay Dutt, it is pretty surreal to see him in a police uniform, knowing, as we do, where he resides these days.

The production design and the costumes are gritty, but the candyfloss shines through every now and then - it is, after all, a Dharma Productions product, and some colour and gloss are mandatory. With as many music directors as actors in this movie, the songs are average, and lack uniformity. The camera work is deliberately stylish, and slightly OTT, but that works in the film's favour. The editing is just about right, and it is not the editor's fault that the script drags at points.

Watch Ungli because you want to, not because you have to. It can be a good distraction over the weekend, and you may feel indulgent enough (towards Emraan Hashmi, maybe) to snigger at the bad jokes. And while you are at it, take a long, hard look at Neha Dhupia. Is she getting repetitive?
Share. Save. Connect.
Tweet
UNGLI SNAPSHOT 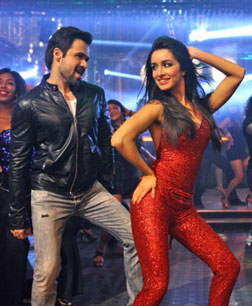 ADVERTISEMENT
This page was tagged for
Ungli hindi movie
Ungli reviews
release date
Sanjay Dutt, Emraan Hashmi
theatres list
Follow @fullhyderabad
Follow fullhyd.com on
About Hyderabad
The Hyderabad Community
Improve fullhyd.com
More
Our Other Local Guides
Our other sites
© Copyright 1999-2009 LRR Technologies (Hyderabad), Pvt Ltd. All rights reserved. fullhyd, fullhyderabad, Welcome To The Neighbourhood are trademarks of LRR Technologies (Hyderabad) Pvt Ltd. The textual, graphic, audio and audiovisual material in this site is protected by copyright law. You may not copy, distribute, or use this material except as necessary for your personal, non-commercial use. Any trademarks are the properties of their respective owners. More on Hyderabad, India. Jobs in Hyderabad.