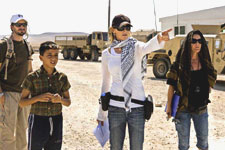 Nupur Barua / fullhyd.com
EDITOR RATING
8.0
Performances
Script
Music/Soundtrack
Visuals
7.0
7.0
6.0
8.0
Suggestions
Can watch again
Yes
Good for kids
No
Good for dates
No
Wait to rent it
No
The success of her 2009 movie, The Hurt Locker, placed Kathryn Bigelow in the big league and in Time's list of 100 most influential people. It was while she was working on a script for her next, the 2001 Battle Of Tora Bora, in which attempts to capture Osama Bin Laden were shown as futile, that the biggest news of the past decade came in - the man responsible for the 9/11 massacre was captured and killed. Bigelow discarded Tora Bora as a subject, and jumped into research on this covert operation - the one that has brought a sigh of relief to many people, and criticised by most.

She named it Zero Dark Thirty, which literally means "30 minutes after midnight", to create an impression "of the darkness and secrecy that cloaked the entire decade-long mission (to find Osama Bin Laden)". At almost 3 hours, the movie takes you through 10 years in the life of "Maya" (Jessica Chastain), who relentlessly pursued Osama Bin Laden and convinced her superiors that he was holed up in that "fortress" in Abbotabad, Pakistan.

Maya is not a real-life character - she only stands for the person who made the operation possible. Bigelow has categorically stated that the events in the movie are actual events, but she has used a few creative liberties. We still do not know, even at the end of the movie, who Maya is, or really was.

In the movie, however, Maya is a CIA agent posted in Pakistan. She was recruited straight out of high school, and is incorporated into the team that interrogates suspects who may have leads on Osama Bin Laden, code-named UBL.

With repeated exposure to the torture tactics used by her colleagues, Maya becomes immune to the violence, and evolves into a hardened agent who has only one agenda - to work on every little clue that can lead the team to UBL.

It takes her 12 years. Not because she is lacking in talent (she is, in fact, quite a prodigy, with immense research and investigative skills), but because she cannot find Abu Ahmed, UBL's most trusted courier and aide.

She plods on, despite the cynicism of her colleagues and many false leads. She finally forces her superiors to lend her a team that can pinpoint the location of Abu Ahmed by locating the signal of his mobile phone. In the end, she identifies UBL's location, and the rest, as we all know, is history.

Mark Boal (the writer) and Kathryn Bigelow have managed to delve deep into CIA material and weave together a story that keeps you enthralled, despite the fact that you know how this all ends.

The movie is shot with minimum indulgence, and is almost a documentary. There are no dramatic shots or moments, or even emotion. Every character concentrates on his or her duty, and there are no peripheral romances or upheavals - there is no time for that.

Dialogues are a little difficult to understand, because of the military and CIA jargon that is used liberally. You are supposed to know acronyms that these people would use, and this may lead to a slight disconnect. In fact, most of the events are not explained, and it is clear that the makers assumed that anybody interested in this movie would already know the history.

At times, you may experience some confusion - is Bigelow making a statement that tells the world that the US is not to be trifled with, or is she being sarcastic when she makes the characters use words like "homeland" for their country? Are the explicit torture scenes supposed to make us pause and reflect, or is she just being matter-of-fact about the way things work in the CIA?

Similarly, does she mean to show us how arrogant, vain, and self-absorbed the Americans are in somebody else's country, or is she just stating facts without being judgemental? Also, every twist and turn in the plot is explained in detail, but it is not clear how Maya knows that UBL is in that house in Abbotabad (when she was chasing Abu Ahmed).

Jessica Chastain, who is fast proving herself to be one of the most versatile actors in the US, is the perfect Maya. She is not cold, but she lacks emotion. Her transition from the unsure, wide-eyed new recruit to the crazy lady who can abuse her boss showcases Chastain's inherent talent - every nuance is played out with conviction.

Bigelow has access to most top billing actors in the industry, and she likes to show this off by giving big names, like Joel Edgerton and Chris Pratt, two-bit roles (remember Guy Pearce in The Hurt Locker?). All of them, including Mark Strong and James Gandolfini, act out their parts with élan, and surprisingly, they do not distract you from the content by being overbearing in their roles.

The movie was shot in Chandigarh, where parts of various cities of Pakistan were recreated. Unless you are really looking for flaws, you will be forced to appreciate the authentic production design - well, almost authentic...the Maruti vehicles and, specifically, the Gypsy are dead giveaways for people who know their cars in India.

Both the music and the costume blend in with the environment, and you barely pay attention to either, which is a mark of a job well done. Cinematography is realistic, and mostly in natural light (including the actual mission, that took place in near darkness).

At present, Bigelow faces some complicated problems. The CIA is not too happy with the movie, and is investigating the likelihood that Bigelow and her team accessed data without proper authorisation. In India, radical political groups have a problem with the fact that an Indian city was made to resemble Pakistan. These may or may not be solved soon, but what is imperative is that she has thrown in a lot of passion and involvement to make this project a well-documented slice of history, for us, and for future generations.

A word of caution - read up a bit on the CIA, the mission that killed UBL, and Tora Bora, before you watch Zero Dark Thirty, an important film on contemporary history.
Share. Save. Connect.
Tweet
ZERO DARK THIRTY SNAPSHOT 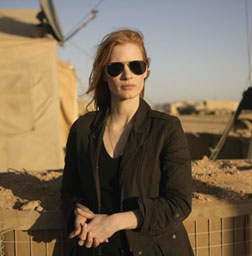 ADVERTISEMENT
This page was tagged for
Zero Dark Thirty english movie
Zero Dark Thirty reviews
release date
Jason Clarke, Reda Kateb
theatres list
Follow @fullhyderabad
Follow fullhyd.com on
About Hyderabad
The Hyderabad Community
Improve fullhyd.com
More
Our Other Local Guides
Our other sites
© Copyright 1999-2009 LRR Technologies (Hyderabad), Pvt Ltd. All rights reserved. fullhyd, fullhyderabad, Welcome To The Neighbourhood are trademarks of LRR Technologies (Hyderabad) Pvt Ltd. The textual, graphic, audio and audiovisual material in this site is protected by copyright law. You may not copy, distribute, or use this material except as necessary for your personal, non-commercial use. Any trademarks are the properties of their respective owners. More on Hyderabad, India. Jobs in Hyderabad.