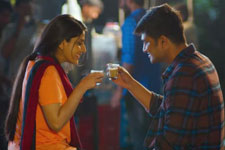 Swaroop Thotada / fullhyd.com
EDITOR RATING
4.0
Performances
Script
Music/Soundtrack
Visuals
6.0
3.0
7.5
7.0
Suggestions
Can watch again
No
Good for kids
Yes
Good for dates
No
Wait to rent it
Yes
The first major problem with Kirrak Party is its casting. Not that the acting is bad, but the film tries to pass off these men who are clearly in their late twenties and even early thirties as 19-year-olds. A major portion of Kammula's Happy Days or any other successful campus flick owes to fresh casting. Yes, the actors in Kirrak Party display boundless energy and enthusiasm, but they can do nothing to make you believe that they are as young as the script needs them to be. The exception is Nikhil, who somehow looks as fresh as his Rajesh in Happy Days, but somehow you can't forget that Happy Days was 10 years ago.

Kirrak Party starts off as a campus comedy, morphs into a slice-of-life film, and tries to end up as a character study. This overbearing ambition to be everything at the same time deprives the movie of any soul it could have. Krishna (Nikhil) is the self-anointed leader of a motley group of backbenchers (Patamatalanka Naveen, RJ Hemanth, Rakendu Mouli, Viva Raghav, Mourya Siddavaram, Karthik Adusumilli) whose lives are replete with beer, mass-bunking and crackling one-liners. You are made to endure a lot of recycled Whatsapp-humour that falls flat all too often. And students salivating at the slightest appearance of the navel of a hot woman professor could have been funny, but this is 2018.

This world of colours bright and all-too-bright is ruled by Meera (Simran Pareenja), who happens to be the college-queen but somehow evades the awareness. She simply shakes off all the attention with a cheerful smile and is only interested in going to church and helping the needy, while the entire college is helplessly smitten by her.

This is an interesting trope - the good-looking-Mother-Teresa heroine that has been pervading our movies for decades. Interesting not to watch, but to analyze, that is. Somehow our leading ladies have to be these voracious altruists, fiercely engaged in visiting orphanages, cheering up children or at least helping the blind cross the road. Otherwise, how can they heal and fix the spoilt-brat hero? Somehow most of our leading ladies are not flesh-and-blood characters but cinematic solutions proposed to sort out the mess the leading character is.

You still wouldn't mind the age-old cliché had it been woven organically into the plot, but here it is just tiresome. So Krishna courts Meera and befriends her, and she throws light on his better side and urges him to explore it. He then gives her a tour of the city's nightlife that involves having roadside tea, a bike ride on the lonely roads and all those token "simple-yet-great" pleasures of life. Meera is thrilled and you bet she hasn't seen Titanic.

This familiar and predictable love story takes an unpredictable turn that changes Krishna for good. Now he is back to being a mess again, and is again waiting to be fixed. But who can take up such a Herculean task? Yes, you guessed right - it's another girl. This time a caffeinated fan-girl Satya (Samyuktha Hegde) who goes as far as stalking Krishna with a drone. Will Krishna ultimately fix himself? Can he be redeemed? Do you care? The answer to at least one of those questions is very clear.

Krishna's conflict with Arjun (Rakendu Mouli) is treated as a major plot point, to be resolved in the climax. The entire second half revolves around his quarrels and clashes with Arjun, but how the separation actually happens is not written convincingly, resulting in its turning out predictable and perfunctory when they eventually patch up in the end. In fact, most of the movie feels the same way.

The songs chase the soul of the film that is lost somewhere in execution, and are as lost as every other performance. The cinematography is neat and the production values are impressive. What stands out better than the film itself is the background score, which is lively and inventive, and unlike the film itself, takes risks.

While most of Kirrak Party's tricks fall flat, it does induce nostalgia. In spite of the setting being too classy and the scenes too staged, the movie does have that college vibe that reminds you of your days of glory and mischief. If that is something for which you can endure a truckload of mediocrity, you can give this a try.
Share. Save. Connect.
Tweet
KIRRAK PARTY SNAPSHOT 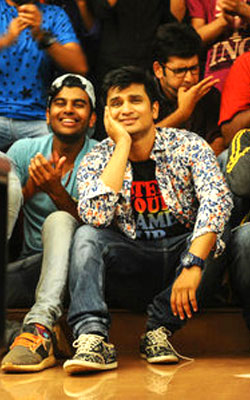 Was it just me, or did anybody else laugh for 5 minutes straight when the heroine "fell" out the window and died? The way the heroine dies in the Kannada version is way worse.

(Don't judge me if you haven't seen the scene for yourself. It was hilarious. The rest of the movie sucked.)

ADVERTISEMENT
This page was tagged for
Kirrak Party telugu movie
Kirrak Party reviews
release date
Nikhil, Simran Pareenja
theatres list
Follow @fullhyderabad
Follow fullhyd.com on
About Hyderabad
The Hyderabad Community
Improve fullhyd.com
More
Our Other Local Guides
Our other sites
© Copyright 1999-2009 LRR Technologies (Hyderabad), Pvt Ltd. All rights reserved. fullhyd, fullhyderabad, Welcome To The Neighbourhood are trademarks of LRR Technologies (Hyderabad) Pvt Ltd. The textual, graphic, audio and audiovisual material in this site is protected by copyright law. You may not copy, distribute, or use this material except as necessary for your personal, non-commercial use. Any trademarks are the properties of their respective owners. More on Hyderabad, India. Jobs in Hyderabad.