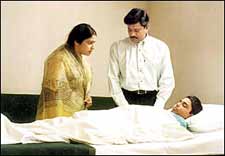 EDITOR RATING
1.0
Performances
Script
Music/Soundtrack
Visuals
NA
NA
NA
NA
Suggestions
Can watch again
NA
Good for kids
NA
Good for dates
NA
Wait to rent it
NA
Harivillu is a pathetic film, among the worst ever put out by the Telugu film industry, and the next few paragraphs are going to refer to it in the only manner that it deserves. Before that, however, a question several might ask at the end of this - what is our problem with someone indulging his fancy, however illiterate his definition of alternate cinema be? It is that we paid. Our problem is that. We got conned into friggin' paying for this thanks to the promos.

Anybody can put whatever he wants on a length of reel, but inducing an unsuspecting public to pay to watch stuff like this is nothing short of a con job. The fact that a director isn't capable of creativity and subtlety is no reason to pardon such productions. What would you do if a supposed mineral water manufacturer palmed you off contaminated stuff - pardon him for not knowing how to purify? Right.

The unfortunate thing is Mr. Narsing Rao has a reputation preceding him, forcing you to sit and ponder over what the hell you've missed out in here. Nothing. There's no understated story-telling, no poignant emotions conveyed through mute acts, no subtle message-oriented payoff and not a single inspired scene. But why should we expect any of this in the first place? Because this is not a commercial film that entertains your more easy-to-appease sensibilities. But why shouldn't you not make a non-commercial film that still doesn't have all the rest of those above? Because you'll come up with crap, honey.

To understand the thinking process behind Harivillu, let's look at a hypothetical situation. If you are a smart college kid about to participate in a story-writing competition at a fest for the first time, and had no story to tell, then this is what you'd do:

1. Decide to do a tragedy first - tragedies almost always win prizes, and give the impression that you are more evolved, a "thinker".
2. Put some heavy/vague dialogue and non-sequiter scenes that are abstract and therefore "deep" (preferably use profound-sounding title even if irrelevant).
3. Have some random characters who appear randomly, do random things and disappear, so as to give the impression of weaving key messages into the main story in artistic fashion.
4. End abruptly.

If you don't believe in the efficacy of this one to win prizes, you really should try it. Mr. Narsing Rao is no college kid now, which is actually the unfortunate part. More unfortunate is the fact that there are several people who'd nod wisely at the end of such stuff just so as not to appear unsophisticated, as persons who can't appreciate true "art".

Harivillu is a tale of the last days in the life of a boy who is diagnosed with cancer and knows it. See, step one - you've already won half the awards and made it to ALL the film festivals. Okay, let us quit being mean yet and give this its full chance - the premise certainly offers brilliant potential. So what does the film have?

Step 2. The first half has some 20,000 scenes of the kid bathing, painting and being obdurate, most of which don't make any sense unless you put on your art patron mask. Act 1 - he bathes, puts on loud music. Act 2 - he bathes, puts on lots of talcum powder. Act 3 - he bathes, paints his room's walls randomly. Act 4 - he bathes, falls unconscious. Act 5 - he bathes, does some paper painting and plays some guitar. Heck, is this a film or a webcam put on screen? What's the summary, Mr. Rao - that this is how an average kid diagnosed with cancer would behave? Or that this is an artist's representation of a kid diagnosed with cancer? Sue us, but we feel pretty dumb at our incomprehension.

The kid utters some very filmi self-pity dialogues that are still far beyond his years, and significant reel time is devoted to showing him being fiercely obstinate. Why, dude, why? What's the point - that kids suffering terminal diseases are likely to behave this way? If it is, then it's factually wrong. If this is just an isolated case, a mere fictional story, then the amount of time and number of scenes dedicated to showing this shows intellectual bankruptcy, an incapability to conceptualize anything else to fill time. We'd have gotten the point in 2 quick scenes.

In all this, the film is sadistically slow in progress, and masochistically poor on any production values (even though those are not the primary point of contention - it's just that this is still a review). The second half has the kid befriending the daughter of the house's maid, spending all his time - verrrrrrry slowly, of course - with her despite his mom's initial shock, and feeling some mild budding sexual feelings. Nothing worth any mention, no brilliant depiction of childhood life. The film plods on, and just as the budget ends, the stop button is hit. Complete to step 4 - absolutely abrupt ending, left purely for you to interpret.

The film also has step 3 in the form of a mad man whose presence has absolutely no meaning - again, that is, unless you put on your art patron hat - and a depthless child psychologist whose only role is asking the kid if he'll be friends with her. Random characters with no meaning, purpose or relevance. It thus satisfies all requirements for a critic award nomination.

Making non-commercial cinema is not an end in itself. It still has to have a story you're narrating with a purpose - even if that purpose is just indulging your own creative expression. Our problem with Harivillu is not that it is not engrossing or fast-paced - our problem is that there is simply nothing in it. It is an unabashed algorithm-based effort aimed at receiving praise from critics and winning awards, and a disastrous one at that. The PR machinery is already at work, and the movie will surely receive applause from critics who are too scared of appearing like tasteless hoi polloi or of offending the big men behind this.

If you want to see how a similar story can be narrated with infinitely more life, passion and feel in it, watch Anjali.


P S The views expressed are relevant only to this film.
Share. Save. Connect.
Tweet
HARIVILLU SNAPSHOT

ADVERTISEMENT
This page was tagged for
Harivillu telugu movie
Harivillu reviews
release date
Master Sai Prabhakar, Miss Nitya
theatres list
Follow @fullhyderabad
Follow fullhyd.com on
About Hyderabad
The Hyderabad Community
Improve fullhyd.com
More
Our Other Local Guides
Our other sites
© Copyright 1999-2009 LRR Technologies (Hyderabad), Pvt Ltd. All rights reserved. fullhyd, fullhyderabad, Welcome To The Neighbourhood are trademarks of LRR Technologies (Hyderabad) Pvt Ltd. The textual, graphic, audio and audiovisual material in this site is protected by copyright law. You may not copy, distribute, or use this material except as necessary for your personal, non-commercial use. Any trademarks are the properties of their respective owners. More on Hyderabad, India. Jobs in Hyderabad.