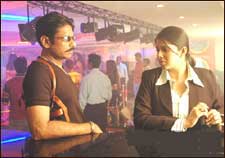 Priyanka Pulla / fullhyd.com
EDITOR RATING
1.0
Performances
Script
Music/Soundtrack
Visuals
NA
NA
NA
NA
Suggestions
Can watch again
NA
Good for kids
NA
Good for dates
NA
Wait for OTT
NA
If you could be clever enough to name the movie something that would make people take notice, couldn't you infuse just some of that cleverness into the darned story, huh? Huh? Huh???

Alex is actually just another Veerudu, Nayakudu, Andhrudu or Akhandudu, in disguise. It was meant to be that, but some nosy parker chipped into the movie-making team, and named it Alex to fool us. It is a chip of the old block after all, a slice of the same maggot-infested apple that a majority of Tollywood mass movies are today. It is the same old withering story of one man with a mountainous ego and zilch libido (causing him to give up all carnal needs), pursuing his karmic duty. To cleanse the earth of all evil.

Haranath plays Alexander or Alex, a cop who looks like he has been cursed by Harry Potter's Petrificus Totalus. That curse which turns one into stone. He has a perpetual goggle-eyed look, wearing which he pursues goons and villains, while simultaneously neglecting his duties as fiancé and boyfriend to Sangeeta. Eventually, sense dawns on the poor girl who dumps him.

He goes on to be inducted into a secret squad under Operation Blue Fox that has a motto "No enquiries, only encounters", and is out to wipe out all traces of crime in AP. The scenes of killings and shootouts follow, stringed together as indistinguishably as a sequence of train bogies.

Next to enter his life is Rambha the reporter, wearing short skirts and spectacles, and looking very pretty. She helps Alex track down Sunny, who ruins his life by getting him wrongly accused in an MLA murder case. Now, of course, the story has a lot more twists and turns than required to fill more two hours. But – yawn – believe me, they really don't matter.

From another ad nauseum encore of Suparichitudu by Venu Madhav, to an item number that copies its costumes and choreography from a Deepal Shaw video, this movie is filled with elements that are torturously evocative of previous hits. Only Rambha throws some brightness into the torpor with her unlikely costumes that she carries off so well.

The songs are all right, but guess no one will watch the movie to find that out. Rambha's acting stands out, while Haranath is as dull as the girl in the old Carefree ad before she switches her brand. In addition, there are tons of logical loopholes that make one wonder if the wrong parts got lopped off in the editing room.

It is rather weird for a man who directed a movie like In The Name Of Buddha to suddenly come up with such manifest triteness. Alex is full of such mysteries. Either there is something going on encoded in the scenes that you don't have a clue about, or this is simply the worst movie of the year. Save the worst for last types. Hopefully we won't have to find out.

All in all, Alex is a consummate bore. Stick to the review and don't venture near the movie.
Share. Save. Connect.
Tweet
ALEX SNAPSHOT

ADVERTISEMENT
This page was tagged for
alex telugu movie 2005 watch
Aex vedos telugus
Alex wonder songs Telugu lo
Alex Telugu movie
Alex Telugu movie video songs
Follow @fullhyderabad
Follow fullhyd.com on
About Hyderabad
The Hyderabad Community
Improve fullhyd.com
More
Our Other Local Guides
Our other sites
© Copyright 1999-2009 LRR Technologies (Hyderabad), Pvt Ltd. All rights reserved. fullhyd, fullhyderabad, Welcome To The Neighbourhood are trademarks of LRR Technologies (Hyderabad) Pvt Ltd. The textual, graphic, audio and audiovisual material in this site is protected by copyright law. You may not copy, distribute, or use this material except as necessary for your personal, non-commercial use. Any trademarks are the properties of their respective owners. More on Hyderabad, India. Jobs in Hyderabad.