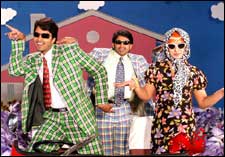 Like somebody practicing squash on you with it, the word is bombarded on you with violence, and a little blip that doesn’t cloak its sound. The actors use the word as often as possible, believing in its therapeutic properties as much they would in a Gayatri Japam. All in all, Ravi Babu draws very heavily from his child ego-state – the one that still enjoys the chaddi lo chillu brand of humor.

So much for the classy comedy part. As for the ‘freshness’, which it seems to be every director’s constant endeavour to create, Party takes a shot with flouroscent-yellow and srawberry-red sets that will make you wonder if you are watching a Telugu movie or an episode of Teletubbies.

All men wear satin shirts, and ties cut out of the same cloth. Women shaped like the Empire State Building, i. e. wide, straight and high, dress up in mini-skirts that hike up tantalisingly everytime they sit or bend. A song is picturised on THE Barbie Girl set, with shocking pink hair and towels slipping off not-so-svelte bodies. Throw in, of course, a yellow, Fisher-Price cardboard guitar, and music that might not make it that far-up on the Billboard chart.

Oh, and yes – there is also one scene from Mr. Bean, the one where he tries to dry the crotch of his pants at a warm-air blower in the men’s room. Only, this one stops short of the jerking-off actions. But don’t worry, there are at least a couple of scenes of robust cleavages and expanses of female skin. Telugu movie after all, people, Telugu movie!

The plot goes this way. Dr. Rajendra Prasad (Brahmanandam) is the chairman of Underware, and they have just unveiled a supercomputer which they plan to sell to Norman Bates, representative of Bill Gates, for a massive sum that will save their company from bankruptcy.

Two employees with code names Microchip (Ravi Prakash) and Potato Chip, sabotage the launch by blowing up the comp and destroying the back-up files. Believe me, that is another component of Party you will thoroughly enjoy – the cute little logic that binds up all the little sub-plots.

Meanwhile Nani (Allari Naresh) and Bujji (Shashank)have worked up a debt of Rs. 1 crore from a certain Velanna, who chops off the pinky of all those who don’t pay up. So they start duping software company CEOs with their talking computer, which gets ordered by the dozen as their clever schemes pay off.

The talking-computer Bujji Babu, of course, has Bujji sitting behind a screen and completing nursery rhymes in any language prompted to him by the user. So Norman Bates says ‘Johnny Johnny’, and Bujji Babu says ‘Yes Papa’, and Norman Bates says ‘Eureka’, and just stops short of running around town starkers in celebration. Bujji Babu tells Tamil, Telugu and Hindi rhymes too.

Nani and Bujji then join Underware by crook, and start looking for a way to make their pile. Meanwhile John Abraham (Brahmanandam in a double role) is out to kill Rajendra Prasad, take his money and get plastic surgery to turn into the real John Abraham, run away to an exotic island and retire with his vamp loveling. Madhu Sharma is Rajendra Prasad’s daughter who is being wooed by Nani.

That is the basic plot, concisely put. But the real movie rises out of it, without restraint, like foam bubbles from a bath-tub of water overdosed with bubblebath. Mistaken identities and chases abound, while there is morbidity as characters conk-off into their birthday cakes and die.

Some of the pratfall does force you laugh, but soon enough the laughs simmer down and then you feel like you are being whisked around in the whirlpool in a washing-machine. The same jokes keep coming back ad nauseum, and it seems the director finds his side-splitting nomenclature such a hoot, that the handful of droll names (Underware, Jayalalita) are wielded around like an underwriter’s guarantee. The 8-10 year old age-group will find Party a rollicking romp.

Truly, it can’t get bawdier than this, and with the silliness thrown in, this Party is more like the first-period's History lecture by a crabby professor on Monday morning. If that kicks you, go watch by all means.
Share. Save. Connect.
Tweet
PARTY SNAPSHOT

ADVERTISEMENT
This page was tagged for
sound party movie heroine name
Party telugu movie
Party reviews
release date
Allari Naresh, Shashank
Follow @fullhyderabad
Follow fullhyd.com on
About Hyderabad
The Hyderabad Community
Improve fullhyd.com
More
Our Other Local Guides
Our other sites
© Copyright 1999-2009 LRR Technologies (Hyderabad), Pvt Ltd. All rights reserved. fullhyd, fullhyderabad, Welcome To The Neighbourhood are trademarks of LRR Technologies (Hyderabad) Pvt Ltd. The textual, graphic, audio and audiovisual material in this site is protected by copyright law. You may not copy, distribute, or use this material except as necessary for your personal, non-commercial use. Any trademarks are the properties of their respective owners. More on Hyderabad, India. Jobs in Hyderabad.