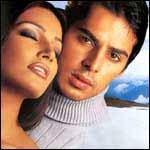 Smriti Kashyap / fullhyd.com
EDITOR RATING
1.0
Performances
Script
Music/Soundtrack
Visuals
NA
NA
NA
NA
Suggestions
Can watch again
NA
Good for kids
NA
Good for dates
NA
Wait to rent it
NA
Remember those corny Ramsey Brothers movies like Pyaasi Chudel, Prêtaatma Jiska Tan Jalta Hai, Veerana, Ek Bhoot - Do Bhootni etc. that we used to watch when we were those slightly criminal kids? Can you recall those corny one-liners (mostly BHOOOOOOT!!!), the mysterious one-eared watchmen with the lanterns and the torn shawls (acting as if they didn't hear all those spooky noises), and the bathrooms with blood coming through the showers (and the rotund heroines underneath)? Well, if you can actually remember all those then there is no rational reason to watch Raaz. But if you actually wish to swim across the tide and head for the theaters, then this is what you'll be dished out.

Squinty beauty Sanjana (Bipasha) is the tired wife of rich boy Aditya Dhanraj (Dino Morea - 'Molea' going by the number of moles on his face). Anyways, ol' Bips gets really upset by her husband's neglectful behavior and slams her car into what seems to be an accident. Looking at his wife lying in her hospital greens, Dino decides they should give their crumbling marriage another chance and they both decide to head for the hills - Ooty being the destination in mind. To quote Dino, "Wahan par koi nahin hoga, bas tum aur hum". Hah, what do they know!

Once at Ooty, Bips starts to hear mysterious noises. Actually just one noise, a high-decibel blood-curdling screech that sounds less like a shriek and more like a bat being beaten to death. The house where these guys are put up is apparently haunted, and we know this because the doors keep rattling and Bipasha keeps insisting ki 'koi hai'.

So they decide to bring in a vaastu expert (I didn't know till here that exorcism was an element of vaastu), Ashutosh Rana, who does some hocus pocus with a lemon and comes to the conclusions that:

The second half is all about how Bipasha contacts the spirit, and is absolutely spiritless. The script is so pathetic that it is an insult to the entire genre of bhoot movies. The ads proudly proclaimed it to be a psycho thriller... no buddy, that honor goes to Maa Tujhe Salaam! The only psycho we register here is the scriptwriter that thought up this corny one-idea flick.

As far as acting goes, Bipasha looks pretty terrified, and not necessarily in that order. She shows off her lung capacity by screeching at the top of her vocal chords. Dino seems to have been slipped into the movie by real life beau Bips, and the only highlight when he's on screen is this morbid fascination that grips you when you sees a face littered with moles of all shapes and sizes.

The songs are thrust upon you, but thankfully aren't as bad as the flick. Of well, if you have an afternoon to spare and want to see mechanical owls all over the screen and some real over-the-top corn, then you mustn't give Raaz a miss!
Share. Save. Connect.
Tweet
RAAZ SNAPSHOT

ADVERTISEMENT
This page was tagged for
Raaz hindi movie
Raaz reviews
release date
Dino Morea, Bipasha Basu
theatres list
Follow @fullhyderabad
Follow fullhyd.com on
About Hyderabad
The Hyderabad Community
Improve fullhyd.com
More
Our Other Local Guides
Our other sites
© Copyright 1999-2009 LRR Technologies (Hyderabad), Pvt Ltd. All rights reserved. fullhyd, fullhyderabad, Welcome To The Neighbourhood are trademarks of LRR Technologies (Hyderabad) Pvt Ltd. The textual, graphic, audio and audiovisual material in this site is protected by copyright law. You may not copy, distribute, or use this material except as necessary for your personal, non-commercial use. Any trademarks are the properties of their respective owners. More on Hyderabad, India. Jobs in Hyderabad.