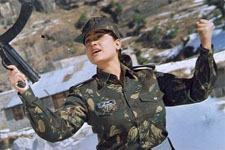 EDITOR RATING
7.0
Performances
Script
Music/Soundtrack
Visuals
NA
NA
NA
NA
Suggestions
Can watch again
NA
Good for kids
NA
Good for dates
NA
Wait to rent it
NA
Sympathies to all ye iron-pumpers out there. All that sweat and grime doesn't pay off. Okay, maybe as Calvin in his more erudite discussions with his dad would note, the fee that you pay the gym would help the economy through increased aggregate consumer spending, creation of more jobs and more such blah, but if you're talking of being able to bash up the baddies, muscles aren't really essential. Schwarzenegger and Stallone use guns, but our lady does quite well with her bare hands. Need we say more?

Yet, Vijayashanti, desperately looking for a hit after Osay Ramulamma, seems to have struck gold with Vyjayanthi. Caught as she is in the tribal roles, she's got a good role after a long time. This time, the military-officer-turned-supercop is out to wreak havoc on the ISI elements who have made Hyderabad and the surrounding districts of Telangana their base.

The daughter of a military officer, young Vyjayanthi (Vijayashanti) crosses swords with the Maharani of Visunoor, Vadivakkarasi. The Maharani's vendetta results in her family's getting scattered. Vyjayanthi grows up to become a military officer and impresses none lesser than the union home minister through heroics to capture ultras at the border and secure the release of a kidnapped minister, and (of course, what'd life be without some melodrama!) a five-minute monologue on how the life of a minister is not important compared to the hundreds of lives lost in defending the country. Okay, so Vijayashanti is good at these, but haven't we had enough?

The wowed home minister sends her down South to rid Hyderabad and its surrounding districts of the ISI menace. Identifying Visunoor as the nerve centre of these activities, Vijayashanti sets up camp in Vadivakkarasi's fiefdom. This, of course, results in the inevitable clash. Maharani is well-connected, and the powers-that-be take Vyjayanthi her to task for overstepping her limits.

The disgusted Vyjayanthi resigns her job and becomes a taxi driver helping the needy, but stays on the lookout for the ISI elements as well as her long lost kin. She manages to locate her kin, and just as everything seems to go her way, she is nabbed by the police for engineering a bomb blast. How she comes out and puts an end to her detractors forms the remaining part of the story.

Vijayashanti does well, and sans the points where a little credulity is demanded of you (the bare-handed fights), the film isn't bad. If the fight sequences were a little faster, the film would have ended up as another Kartavyam, where the central character has the same name - Vyjayanthi. But it is the Tamilian actress Vadivakkarasi, as the Maharani, who steals your heart. She essays her role so perfectly that there is no flaw. She sustains the interest of the film all along with her wicked ways. But as for the others the lesser said the better.
Share. Save. Connect.
Tweet
VYJAYANTHI SNAPSHOT

ADVERTISEMENT
This page was tagged for
vyjayanthi movie actors
Vaijayanti telgu Movie song
vyjayanthi movie cast
vyjayanthi movie release date
vyjayanthi movie
Follow @fullhyderabad
Follow fullhyd.com on
About Hyderabad
The Hyderabad Community
Improve fullhyd.com
More
Our Other Local Guides
Our other sites
© Copyright 1999-2009 LRR Technologies (Hyderabad), Pvt Ltd. All rights reserved. fullhyd, fullhyderabad, Welcome To The Neighbourhood are trademarks of LRR Technologies (Hyderabad) Pvt Ltd. The textual, graphic, audio and audiovisual material in this site is protected by copyright law. You may not copy, distribute, or use this material except as necessary for your personal, non-commercial use. Any trademarks are the properties of their respective owners. More on Hyderabad, India. Jobs in Hyderabad.