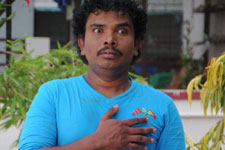 Spandana P / fullhyd.com
EDITOR RATING
2.0
Performances
Script
Music/Soundtrack
Visuals
2.0
1.5
2.0
2.0
Suggestions
Can watch again
No
Good for kids
No
Good for dates
No
Wait to rent it
No
One definitely expects a high dosage of comedy from a film whose primary intention is to take digs at the hero deification that is prevalent in our movie industry. But the makers of "Hrudaya Kaleyam" seem to have forgotten that even a parody needs a decent script and good filmmaking to keep it going strong, and the movie fails to churn out the laugh riot that a comically potent theme like this ideally can.

Sampoornesh Babu is a thief, for whom the entire city police force is on the lookout. He has a gang of amigos who conspire in all the robberies. One of them decides to give him in, and the police arrive during one of the robbery attempts.

Narrowly escaping, Sampoo, after a melodramatic scene (that sees the best emoting his theatrical skills permit him), forgives the betrayer and moves on. The Commissioner persists in tracking Sampoo down, and is shocked when he finally faces Sampoo. Yes, this is the customary interval bang, and takes us to Sampoo's glorious flashback, in the process depicting some breakthrough technologies in the fields of medical sciences and engineering.

Sampoo's past features Neelu (Kavya Kumar), the love of Sampoo's life. She urges Sampoo to make his life worthwhile by doing something great, and he obliges with a computer called Samputer 1.25 (which peaks with the pun in its name - you really do not want to know more).

The top corporate executives of Scamsung, Macrosoft, Bell etc.) want to finish Sampoo because his invention to win his lady love's attention is forcing them out of business. Enter the villain, Black Mamba (who sure as hell is as scary as his name), who attempts to kill Neelu by electrifying her car. Sampoo must now set on the business of saving her life. The rest of the script provides a chance for you to find out just how much of this movie you can sit through.

Sampoornesh Babu, riding high on the wave of social media attention, has no extraordinary acting skills, and very minimal expressions in his kitty. Mahesh Kathi as the police commissioner is entertaining, and Kavya Kumar is a decent performer. The rest of the crew deserves no special mention.

While Hrudaya Kaleyam brings out few trickles of laughter at times when poking fun at the punch lines and antics that our heroes have dished out over the years, as a movie it falls flat on its face as it drags on assaulting your senses (visual and mental) until you can no longer endure it. Watch it only if you belong to the Sampoornesh Fan Club.
Share. Save. Connect.
Tweet
HRUDAYA KALEYAM SNAPSHOT 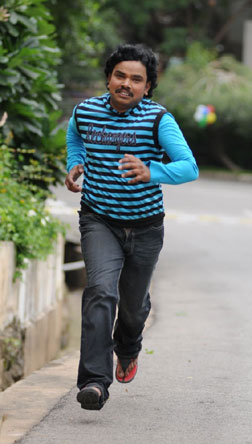 See Hrudaya Kaleyam full details
HRUDAYA KALEYAM USER REVIEWS
1 - 4 OF 4 COMMENTS
POSITIVE  |  NEGATIVE |  NEWEST  |  OLDEST  |  MOST HELPFUL  |  LEAST HELPFUL
Deepa on 7th Apr 2014, 3:49pm | Permalink
For once, this is not a satire on the Telugu Films. Its a satire on every film goer and every film reviewer, including Spandana Paluri, who helped stero type the current state of Telugu movies. It takes lot of guts to laugh at joke, if its played on you. Looks Spandana Paluri lacks those guts
Harish on 7th Apr 2014, 2:45pm | Permalink
Beg to differ!!!
Rs.3.9 crore worldwide in its opening weekend!!!
Can you even imagine that for a small film like this??
Fullhyd always talks about rating based on box-office success.... now what went wrong in this one????
Just because it seems like a B grade film...doesn't mean you have to rate it so low...
Totally unfair on your part....
onebhk on 7th Apr 2014, 10:42am | Permalink
This Spandana Paluri seems to be a fan of M Babu, Powerstar etc types. Please give a new face a chance. Those thick tongued fellows weren't thrown under the bus this hard. You should be ashamed of criticizing this attempt. You are discouraging people who are trying to make an attempt to change the face of telugu cinema. Anyways, thanks for the drivel. I can't rate as I don't remember by PWD. Anyways it is a 10/10
chaitu on 6th Apr 2014, 10:38pm | Permalink
For once, I defer with fullhyd.com review. The fact that the reviewer looked for a script and a story in this movie indicates her ignorance. This film is to be watched with your brains off as there is not one logical scene in the entire film, and THIS IS EXACTLY THE STRENGTH OF THE FILM. It is a one of its kind comedy film with absolutely no vulgarity. It made me laugh my lungs out. Just enjoy Sampoo's superb comedy show without thinking too much and it will surely be a roller coaster ride.
LEAVE A COMMENT
fullhyd.com has 700,000+ monthly visits. Tell Hyderabad what you feel about Hrudaya Kaleyam!
MORE MOVIES
Latest Reviews
Kadhanika
Shukra
Deyyam - 2021
Tempt Raja
Vakeel Saab
more
Wild Dog
Sulthan (Telugu)
Sulthan
Rang De (Telugu)
Saina
Aranya
Sashi
Chaavu Kaburu Challaga
Mosagallu
Gaali Sampath
Contemporary Reviews
Director
Vichakshana
Jal
Captain America: The Winter ...
Captain America: The Winter ...
more
Captain America: The Winter ...
Captain America: The Winter ...
Captain America: The Winter ...
Main Tera Hero
Rowdy
Eduruleni Alexander
Need For Speed (Telugu)
Need For Speed
Noah (3D)
Random Reviews
Kahin Pyaar Naa Ho Jaaye
Jaabili
Pinjar
I Robot
National Treasure - Book Of ...
more
Deep Rising
Vaastav
The Curious Case Of Benjamin...
City Of Gold
X-Men - First Class (Telugu)
Men In Black 3 (MIB 3)
Dilliwaali Zaalim Girlfriend
The Magnificent Seven
Pitch Perfect 3
Angel Has Fallen
SEARCH MOVIES
Dissatisfied with the results? Report a problem or error, or add a listing.
ADVERTISEMENT
SHOUTBOX!
{{todo.name}}
{{todo.date}}
[
ip{{todo.ip}}
]
{{ todo.summary }}... expand »
{{ todo.text }} « collapse
First  |  Prev  |   1   2  3  {{current_page-1}}  {{current_page}}  {{current_page+1}}  {{last_page-2}}  {{last_page-1}}  {{last_page}}   |  Next  |  Last
{{todos[0].name}}