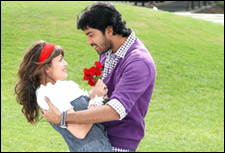 Deepa Garimella / fullhyd.com
EDITOR RATING
5.5
Performances
Script
Music/Soundtrack
Visuals
7.0
5.0
6.0
6.5
Suggestions
Can watch again
No
Good for kids
No
Good for dates
Yes
Wait to rent it
Yes
Prabhaskoka nyaayam naakoka nyaayama? Ye? Chinna cinemalani bathakanivvara?, demands Madatha Kaja's hero in what is one of the few truly comic scenes in the movie. It is a line that is seemingly innocuous but that is loaded with significance. A line that we'd wholly endorse, despite Madatha Kaja's severe failings.

Indeed, few actors can concoct, without indecent amounts of money, the kind of festive cheer that only big-budget products otherwise boast of. The audience walking into an Allari Naresh film is usually armed with the kind of easy anticipation that says, "I know I'm going to have a good time now".

Madatha Kaja, however, is a disappointment. That said, it is not the kind of film that will harm the Allari Naresh brand. Watching it feels a bit like you braved traffic, heat and pollution to meet a really fun friend who's come to town after ages and then discovering that he has a hundred other things to do. And yet, the friend's still funny, and you hope he'll be "in the mood" the next time.

It is just the first 15 minutes and the last 15 minutes of Madatha Kaja that have well-written jokes; the rest of the film has a few sprinkled along the way.

Allari Naresh plays Kalyan, police informer in Vizag, who's done a world of good to the crime rate there. So the police commissioner (Chalapathi Rao) sends him to Hyderabad, and asks him to unravel the mafia set-up involving 2 kingpins, JP (Jayaprakash Reddy) and KP (Ahuti Prasad). JP and KP report to a slimy don called Nanda (Ashish Vidyarthi), who lives in Bangkok. How Kalyan goes about his plan, with his girlfriend (Sneha Ullal), forms the rest of the story.

The plot is too simple for a genre like this, and the writing too escapist. For example, con jobs are usually taken to (and beyond) their logical end in such films, but Kalyan keeps "confessing" to things way too early. Great intentions, but aren't we all here watching the film having willingly suspended our logic (and our ethics), just for a mindless blast?

There are too few thigh-slappingly funny moments in Madatha Kaja. And when the jokes do come in, they're not bad, save for some bland PJs here and there. Makes you wonder why the writers had to be so stingy with their stuff when talent wasn't the problem. The film also contains quite a bit of A-rated comedy, so leave the kids at home.

Much of the cast, hence, feels wasted. Allari Naresh is as much the life of the party as in any other of his films, but the others could have had much better scenes. Jayaprakash Reddy had hilarious sequences in Seema Tapakai, and here, things are toned down.

Ali's costume-changing antics don't tickle ribs by themselves, but his movie spoofs do the job. M S Narayana is funny when he's around. Vennela Kishore has too little to do. Ashish Vidyarthi is given some silly scenes in the end. Yet, all these are actors who can never mess up.

On the other hand, Subbaraju tries hard, and he's clearly sincere, but he is just not ready for slapstick. Sneha Ullal looks as wooden as always.

The film also has above-average production values and some decent music going for it.

If you can settle for just about anything, Madatha Kaja is an okay watch. Nothing iconic there, it's just a filler of sorts.
Share. Save. Connect.
Tweet
MADATHA KAJA SNAPSHOT

ADVERTISEMENT
This page was tagged for
Madatha Kaja telugu movie
Madatha Kaja reviews
release date
Allari Naresh, Sneha Ullal
theatres list
Follow @fullhyderabad
Follow fullhyd.com on
About Hyderabad
The Hyderabad Community
Improve fullhyd.com
More
Our Other Local Guides
Our other sites
© Copyright 1999-2009 LRR Technologies (Hyderabad), Pvt Ltd. All rights reserved. fullhyd, fullhyderabad, Welcome To The Neighbourhood are trademarks of LRR Technologies (Hyderabad) Pvt Ltd. The textual, graphic, audio and audiovisual material in this site is protected by copyright law. You may not copy, distribute, or use this material except as necessary for your personal, non-commercial use. Any trademarks are the properties of their respective owners. More on Hyderabad, India. Jobs in Hyderabad.