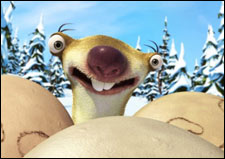 Samrat Sharma / fullhyd.com
EDITOR RATING
5.0
Performances
Script
Music/Soundtrack
Visuals
7.5
3.5
8.0
8.0
Suggestions
Can watch again
No
Good for kids
Yes
Good for dates
No
Wait for OTT
Yes
Such a family film, this one. Everyone including John Leguizamo and his kids, director Carlos Saldanha's children, and Ray Romano with his son have voiced this animated movie, indicative of filial bonding and the fact that no one really cared about the actual film. Oh, you thought I meant this was a good film for you and your family to watch? Oops.

To be fair, the main voice acting in Ice Age 3 isn't bad, neither is the quality of the animation. For a long time the Ice Age films have been used to sell many an LCD television set, and this one, in 3D in select cities, is no exception. The theme of the actual film, though, is where they dropped the ball. After having minted as much as they could out of the actual ice age, the makers decided to let history take a back seat and throw in some dinosaurs.

So how did dinosaurs survive into the Ice Age? They didn't, but according to this film, they had a living, thriving "lost world" under the original one, and bumbling sloth Sid ends up there when an angry dinosaur whisks him away for taking her eggs. What follow are fart jokes, stupid humour, Simon Pegg as an adventurer gone insane, and the rest of the cast going through one slide, cliff, danger etc. after another.

If your children have not watched a single Ice Age film, this might seem brilliant to them. If they have seen any number of animated films till now, as they are wont to, this flick is nothing more than fluff to pass the time with till Up releases, really. You, however, are going to be bored out of your skull most of the time, wishing there was more ice age in this Ice Age.

The movie in itself is pacey, and enjoyable for the most part. The strength of this series have always been the enjoyable characters. However, by this movie the relationships have run out of steam. The strain of having a predator as a friend of the first film or the loneliness angst of Manny (Ray Romano) from the second one have given way to a forced camaraderie that has no conflict except the ones explored already, making most of the beats stale.

It's then sometimes lively and sometimes listless, the film showing some animation wonder in the almost no-dialogue relationship between Scrat and Scratte, and then mixing it up with almost lazy direction around the main cast. There are moments where Sid acrobatically navigates ice traps with the ease of a skater, and there are moments that completely break the pace of the action.

Every gem like the one where Sid brings up little dinosaurs making them feel more sloth-like, has an equivalent crude joke waiting around the corner. This gorgeous-looking film has what it takes to be a truly fun entertainer, but the directors are too busy bringing in everything they can to notice that, making an uneven film that cannot stand up to the best out there.

It's up to you to decide if a movie that is exciting and boring for you in equal parts, but where your kids can spend some relatively fun, if forgettable, time, is worth the price of admission. If you happen to be an animation enthusiast without kids, however, there's much better fare out there.
Share. Save. Connect.
Tweet
ICE AGE 3 SNAPSHOT

ADVERTISEMENT
This page was tagged for
Ice Age 3 english movie
Ice Age 3 reviews
release date
Queen Latifah, Denis Leary
theatres list
Follow @fullhyderabad
Follow fullhyd.com on
About Hyderabad
The Hyderabad Community
Improve fullhyd.com
More
Our Other Local Guides
Our other sites
© Copyright 1999-2009 LRR Technologies (Hyderabad), Pvt Ltd. All rights reserved. fullhyd, fullhyderabad, Welcome To The Neighbourhood are trademarks of LRR Technologies (Hyderabad) Pvt Ltd. The textual, graphic, audio and audiovisual material in this site is protected by copyright law. You may not copy, distribute, or use this material except as necessary for your personal, non-commercial use. Any trademarks are the properties of their respective owners. More on Hyderabad, India. Jobs in Hyderabad.