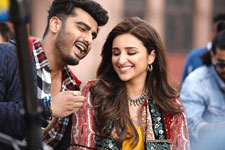 Sonali Dabade / fullhyd.com
EDITOR RATING
2.0
Performances
Script
Music/Soundtrack
Visuals
2.0
1.0
4.0
3.0
Suggestions
Can watch again
No
Good for kids
No
Good for dates
No
Wait for OTT
No
You know those groundbreaking old films that wanted to champion women's empowerment but couldn't quite because of the times they were made in? One such movie appears to have made its way into the modern times, and felt so out of place that it messed the whole thing up. Yes, Namaste England. This one also wanted to be a sequel to Namastey London. But while Namastey London is an upper middle class family from the city, its "sequel" is just a shabby distant cousin.

Param Singh (Arjun Kapoor) is a farmer who has all the time in the world. During Dussehra, he spots Jasmeet (Parineeti Chopra) in the crowd and falls in love with her. Jasmeet wants to be a jewelry designer but her grandfather and brother believe that a woman's place is at home, serving the men of the family, most importantly having babies for their husbands. Much yay for women's empowerment.

Jasmeet glumly tells Param that as long as she is there, she won't be able to follow her dreams because she's a woman. Param, being the romantic, modern guy, suggests they get married because then her grandfather can't tell her what to do. What they don't expect is Jasmeet's dadaji taking a vow from Param's father that Jasmeet will be a housewife. Vows are given, both the senseless and the wedding kind, and suddenly it is one year later.

Jasmeet happens to meet her childhood friend Gurpreet, who connects her to a man who can make all her London dreams come true. This man gives a harebrained idea to Param: marry a "gori", and after getting residence, divorce her and bring his actual wife to England. Param refuses, but Jasmeet secretly implements the idea. She marries Samar (Aditya Seal), an uber rich London NRI, and leaves for England, revealing the truth to Param just minutes before departure. What follows is Param's convoluted plot to manipulate Jasmeet and win her back (when she never really left him in the first place).

Namaste England is doomed right from the "trying to break free from the mould" shtick to the last hackneyed frame. The plot is stupid and looks like it was written hurriedly while referring to notes from movies that executed such plot points better. The characters are clichéd and confused in equal measures, and the dialogues are so laughably bad that it feels like the writers were not given the advance that was promised. While Jasmeet is unbelievably manipulative, Param is almost a complete doormat. There is absolutely no rhyme or reason for most of the actions of the couple.

The actual plot kicks off in the second half, but not any good news - the movie just doesn't make any more sense, and questions about the purpose of the film become increasingly louder. There is also a barely credible sub-plot about illegal immigration and its hardships which looks like it was included to add some "drama" to the movie, but in all probability was there to increase the run time to the Bollywood standard of 150 minutes. There is also a standard "India Is Great" speech which worked wonderfully in Namaste London but makes little sense here and draws zero emotion.

About the performances, the lesser said the better. Everyone appears to have tried too hard to overcome the asinine script and failed spectacularly. Parineeti Chopra tries to be a bubbly Jasmeet and comes off as highly dramatic. Arjun Kapoor tries to be a brooding jat, and comes off as the worst version of Devdas there is. The rest of the supporting cast are completely forgettable in their portrayals of the caricatures they were assigned.

The only good things about the movie, and this is in comparison with the rest of its elements, are probably the music and the songs. They are not particularly path-breaking but are passable and rise above the rest of the movie. The visuals are also quite decent, but this is standard in movies these days and there's nothing distinguishing about them in the context of typical Bollywood entertainers.

In conclusion, there is nothing redeemable about Namaste England, and it is one of those movies that take Bollywood back two steps for each step it takes forward.
Share. Save. Connect.
Tweet
NAMASTE ENGLAND SNAPSHOT 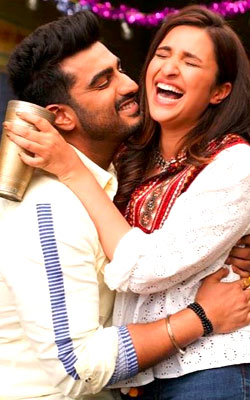 ADVERTISEMENT
This page was tagged for
namaste England conclusion
Namaste England hindi movie
Namaste England reviews
release date
Parineeti Chopra, Arjun Kapoor
Follow @fullhyderabad
Follow fullhyd.com on
About Hyderabad
The Hyderabad Community
Improve fullhyd.com
More
Our Other Local Guides
Our other sites
© Copyright 1999-2009 LRR Technologies (Hyderabad), Pvt Ltd. All rights reserved. fullhyd, fullhyderabad, Welcome To The Neighbourhood are trademarks of LRR Technologies (Hyderabad) Pvt Ltd. The textual, graphic, audio and audiovisual material in this site is protected by copyright law. You may not copy, distribute, or use this material except as necessary for your personal, non-commercial use. Any trademarks are the properties of their respective owners. More on Hyderabad, India. Jobs in Hyderabad.