Sin City: A Dame To Kill For (3D) Review 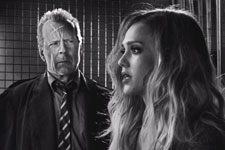 Nupur Barua / fullhyd.com
EDITOR RATING
5.0
Performances
Script
Music/Soundtrack
Visuals
7.0
4.0
7.0
7.0
Suggestions
Can watch again
Yes
Good for kids
No
Good for dates
No
Wait for OTT
No
Sin City, originally, is a series of comics by Frank Miller. When the movie Sin City was released in 2005, neo-noire fans were overwhelmed by the narrative, the style and the characters - in fact, there was not a fault to be found in the entire film. Which is why you wonder why Robert Rodriguez and Frank Miller took so much time to come up with a sequel, especially since Rodriguez had announced his intention to make one immediately after the release of the first film.

Over the years, enough has been said about the delay, with the directors blaming production houses at times, and acting mysterious about the release date now and then. So you can imagine the impatience and the expectations of the loyal audience - which may have put the makers under pressure anyway.

Finally, Sin City: A Dame To Kill For has been released, in 3D no less, and we can all breathe a sigh of relief. Is it mindblowing, you ask, just like the first one? We will come to that a little later.

First, the story. Like the first instalment, this one, too, is divided into chapters, with stories intersecting each other. There are four stories in total, and the first one, "Just Another Saturday Night" is more of a teaser, of sorts. In it, Marv (Mickey Rourke) chases a group of frat boys with the intention of harming them because (a) they are pyromaniacs with a taste in human torches, (b) Marv has nothing better to do that night, and (c) he knows the Projects (the colony, if you will, of apartment buildings) like the back of his hand, and is confident of fulfilling his mission.

In "The Long Black Night", Johnny (Joseph Gordon-Levitt) is a cocky young man who is out to prove himself as a poker player. In fact, his main goal is to defeat Senator Roark (Powers Boothe) in the game, which he does, and the latter avenges this humiliation by beating up the young man. After a shady doctor Kroenig (Chritopher Lloyd) fixes him up, Johnny goes back into the gambling room to prove his point again.

Dwight McCarthy (Josh Brolin) has a new face in "A Dame To Kill For", and he still pines for the Eva (Eva Green), who left him to marry a rich man. After all these years, Eva contacts him again to proclaim her undying love for him, and he is intrigued enough to follow her like a puppy, even when he does not trust her. He discovers, too late, that he should have trusted his instinct.

Nancy Callahan (Jessica Alba) is still a stripper at Kadie's, but she has been practising some shooting, too. She wants to avenge the death of the only man she ever loved - her saviour, Lt. John Hartigan (Bruce Willis). She has become a drunk, but she cannot muster enough courage to kill Senator Roark, the man who deprived her of a happily ever after. All her plotting and planning have come to naught, and she realises that she will need to recruit a willing co-conspirator to achieve her goal.

The narration, as mentioned earlier, alternates between stories. What should be of particular interest to the die-hard fans is that not all the stories are from the same time frame. This sequel has a prequel within the movie, and we will leave it to you to figure out which one it is. As opposed to the first film, the chapters are not titled between transitions, and that can get a little confusing at first, but you will settle in soon enough.

Again, as opposed to the first movie, the stories here lack depth. The makers revel in violence and gore again, of course, but the emotional quotient, or the relationships, are just not compelling enough. Marv, Nancy, Hartigan, Dwight, Gail, Senator Roark, Manute and a few others are recurring characters, but there are also new characters who, frankly, do not really make you sit up and take notice.

Basin City, or Sin City, where the story is based, is Gotham without a superhero in sight. And in it, the Old Town is the pit of whores and snakes. In the stories in this movie, the distinction between the rich and the poor, or the powerful and the helpless, is not too clear. Everybody seems to have an attitude that eventually gets them in trouble. Since the comparisons are inevitable, the second instalment has no touch of wry humour (unlike the first), and the machismo is annoying most of the time.

The film is shot in black and white (mostly) in an attempt create a graphic novel in motion, and the use of colour is haphazard and without justification. Yes, the lips are still blood red and the police lights are still blue and red, but remember how the first movie splashed colour for effect? Well, this one does not do the same. Kadie's is a familiar set, but the other locations do not have much character. Most of the visuals are very generic.

Strangely, despite the technological progress over the past decade, the visual effects of the first movie had more of an impact. This film's VFX are rather complacent. The 3D is effective in parts, but you may get a headache. The music is familiar, most of the time, but lacks the haunting quality of the original. As for the editing - well, if you are watching it in India, be prepared for some censorship, and therefore abrupt plot points that make no sense. The violence calls for an 'A' certificate, but it is obvious that Indian adults should not be allowed to watch nude or sex scenes.

It's never as good as the first time, and Rodriguez-Miller should not have waited for almost a decade to release Sin City: A Dame To Kill For. Much of the excitement is gone, and this is a case of too little, too late. We suggest you revisit Sin City, the first movie, to appreciate the genre, and everything else. For the Sin City aficionado, this movie may be somewhat exciting, since it wraps up some stories from the first, and also offers a peek into this world before things became worse. Definitely worth one watch, but keep your expectations low, and your 3D glasses firmly on your nose.
Share. Save. Connect.
Tweet
SIN CITY: A DAME... SNAPSHOT
SIN CITY: A DAME TO KILL FOR (3D) SNAPSHOT 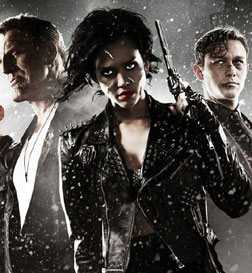 ADVERTISEMENT
This page was tagged for
Sin City: A Dame To Kill For (3D) english movie
Sin City: A Dame To Kill For (3D) reviews
release date
Mickey Rourke, Jessica Alba
theatres list
Follow @fullhyderabad
Follow fullhyd.com on
About Hyderabad
The Hyderabad Community
Improve fullhyd.com
More
Our Other Local Guides
Our other sites
© Copyright 1999-2009 LRR Technologies (Hyderabad), Pvt Ltd. All rights reserved. fullhyd, fullhyderabad, Welcome To The Neighbourhood are trademarks of LRR Technologies (Hyderabad) Pvt Ltd. The textual, graphic, audio and audiovisual material in this site is protected by copyright law. You may not copy, distribute, or use this material except as necessary for your personal, non-commercial use. Any trademarks are the properties of their respective owners. More on Hyderabad, India. Jobs in Hyderabad.