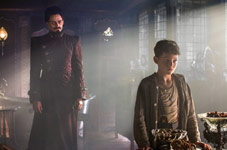 Josh / fullhyd.com
EDITOR RATING
5.0
Performances
Script
Music/Soundtrack
Visuals
6.0
8.0
4.0
8.0
Suggestions
Can watch again
No
Good for kids
Yes
Good for dates
Yes
Wait for OTT
No
A decade earlier, a British gentleman named Christopher Nolan did something extremely clever. He took the most human superhero and reimagined his origin story with some excitingly dark realism. Critics and audiences hungrily lapped up Batman Begins, and many other superhero origin tales followed. Strongly reinforcing the trend, the universally appreciated Dark Knight just upped the ante for the use of dark realism in superhero stories. With all this reimagining and reinterpretation, the sub-genre was changing for good, it appeared.

Doubts began to surface when a not-so-tall and unkempt American played ...*cough*... Sherlock Holmes. But we all love Robert Downey Jr and Guy Ritchie, and didn't think much about it. The problem made itself more conspicuous when the latest Superman film wasn't exactly... fun. Nolan's own The Dark Knight Rises proved to be his weakest film. Complete irrevocable proof that the sub-genre was going to the dogs came with the latest Fantastic Four movie which one of our writers evocatively called "the superhero equivalent of chemotherapy".

And now we are having to watch a Peter Pan origin story which J M Barrie's beloved creation neither needed nor deserved.

For starters, it is so unapologetically anachronistic, it is set in 1942. A good five years after Jim Barrie's death! Peter (Levi Miller) is shown to be left at the doorstep of an orphanage by his mother Mary (Amanda Seyfried), and the nun who runs the orphanage is selling away the orphans to mystical pirates who come in a flying ship to collect their cargo. The children are shipped off to Neverland where the evil but jolly pirate Blackbeard (Hugh Jackman is fascinating) is using all the child labour to mine fairydust called Pixum which helps him retain his youth.

Like this absurd child labour theme weren't enough, we are given another trope - the messiah unites with the tribe of natives (with Rooney Mara playing Tiger Lily) to overhaul the tyrant's rule. Peter broods over his lineage and swears to take responsibility for his tribe. There are declarations of bravery and courage and being a warrior's child. Does anyone realise that all this grown-up talk is quite unbecoming of the boy who never grows up? Whatever happened to boyish innocence and never-ending childhood?

The unsure nature of the core makes itself more ostensible with the soundtrack and the score. As the children are brought into Captain Blackbeard's mines, guess what the miners chant loudly? Nirvana's Smells Like Teen Spirit. Why or how, don't ask. By now we are used to Hans Zimmer's influence pervading all over, but Pan's composer John Powell (also Zimmer's frequent collaborator) comes up with a score so reminiscent of Pirates Of The Caribbean that there's no freshness to it.

Joe Wright (director) and Jason Fuchs (writer) certainly do not have a smattering of the joyful inventiveness of Jim Barrie, but what they do have is a special effects team that can produce truly spellbinding imagery. Whatever the film lacks in terms of content, it tries to make up in technical accomplishment. And it is partially successful, too.

Indeed, Pan is replete with amazingly imagined visuals. There are tremendously well-executed scenes which play with the form and texture of wooden tree rings and clear blue waters. The flying pirate ship in the beginning is pursued by war planes providing a thrilling chase sequence complete with explosions and people falling off (the 3D is made good use of), and ends with a celestial escape to Neverland. The children in the hall went into raptures over these phenomenal action set-pieces.

So maybe we shouldn't forget that this is a children's film after all. We as adults may cry hoarse about loyalty to the canon or overused clichés but a true test for such films is how our younger friends receive them. They may know nothing of Peter Pan and his legacy, but they do savour a good spectacle, particularly if the hero is someone their size.

At any rate, we have one thing to rejoice - Hugh Jackman's performance. From being filled with angst and Adamantium as Wolverine to this gleefully malicious pirate, his range is clearly wide and apparently without flaws. His performance is delicious, and you might find yourself rooting for the villain instead of the hero. His energetic antics and witty dialogue just about manage to save the movie.

However, even by recent reinvention standards, this is an entirely unnecessary origin story. But you can take your kid or that favourite niece to Pan, and they'll likely love you for it. Set your expectations low and let Hugh Jackman entertain you, and you'll likely love him for it.
Share. Save. Connect.
Tweet
PAN SNAPSHOT 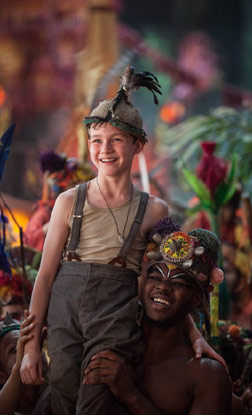 ADVERTISEMENT
This page was tagged for
Pan english movie
Pan reviews
release date
Levi Miller, Hugh Jackman
theatres list
Follow @fullhyderabad
Follow fullhyd.com on
About Hyderabad
The Hyderabad Community
Improve fullhyd.com
More
Our Other Local Guides
Our other sites
© Copyright 1999-2009 LRR Technologies (Hyderabad), Pvt Ltd. All rights reserved. fullhyd, fullhyderabad, Welcome To The Neighbourhood are trademarks of LRR Technologies (Hyderabad) Pvt Ltd. The textual, graphic, audio and audiovisual material in this site is protected by copyright law. You may not copy, distribute, or use this material except as necessary for your personal, non-commercial use. Any trademarks are the properties of their respective owners. More on Hyderabad, India. Jobs in Hyderabad.