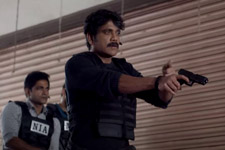 Anil Bandhakavi / fullhyd.com
EDITOR RATING
6.0
Performances
Script
Music/Soundtrack
Visuals
7.0
4.0
7.0
7.0
Suggestions
Can watch again
No
Good for kids
No
Good for dates
No
Wait to rent it
Yes
Anytime you hear about the heroic efforts made by special operatives within our nation's various task forces to track down and destroy terrorists, you're left to wonder what things looked like on the inside - the hero's perspective. Wild Dog, written and directed by Ashishor Solomon, gives us a taste of this action as it honours the group of NIA (National Investigation Agency) operatives who captured Yaseen Bhatkal in a covert mission back in 2013.

Vijay Varma (Nagarjuna) is a detective with the NIA and is referred to as "Wild Dog" for his notoriety on the field. He's an expert at covert missions, and at tracking down and dismantling terrorist groups. He also has a bone to pick with terrorists after losing his daughter to an attack on Gokul Chat in Hyderabad that left him and his wife, Priya Varma (Dia Mirza), childless.

The film begins with an explosion at a bakery in Pune, and Vijay is called upon for his services. He willingly agrees to take up the mission as long as he gets to work with his trusted team of experts. Vijay and his team are back together to track down the mastermind behind the Pune attack, and quickly learn that they are after a man named Khalid (Bilal Hossein) who's a lead figure within the Indian Mujahideen.

It doesn't take long for Vijay to get a step ahead of Khalid in the chase, but unforeseen events set him back a couple of times. The high-speed mission ends up taking the team to Nepal where they are joined by Vijay's confidante in the business, Arya Pandit (Saiyemi Kher). With no shortage of arms or tactical prowess, it is now the team's sole aim to capture Khalid and bring him back to India.

Wild Dog is mostly a cookie-cutter story in its plot, but the execution is where attention was paid to detail. The film has visual appeal as the story takes you from the old parts of Hyderabad into the mountainous regions of Leh and Manali. Competent set design and camera work yield a fullness on screen, and the action is planned to suit the setting.

The fictionalised characters are heroic, but not tacky. Clearly, the sequences show ample training as the detectives' moves look genuine with the right amount of fantasy in the flavour. Nagarjuna keeps a tight grip on his character, and his team of superheroes follows suit in their appearance and agility. The "gangster with a good cause" look is exemplified by Caleb Matthews (Mayank Parakh), who is one of the active operatives on the team.

When all the pieces come together, however, the film lacks that extra edge in its feel. The story hardly pulls at your heartstrings, and the thrill barely kisses the edge of your seat. The dry action is left on its own to carry the weight of entertaining you, which makes the story seem like a slightly dramatic documentation of the real events.

A well-composed background score by S Thaman plays a crucial part in enhancing the element of thrill.

Wild Dog is still a pleasant surprise in many ways. Often, Tollywood movies that go for action disappoint with the cinematographic or editing shortcuts, or create characters that try too hard to impress. In that regard, Wild Dog does very well. However, the film's action definitely needed some turbo behind it, and the story could have used a lot more drama. Overall, it still sets a good example for future Telugu movies of this genre. 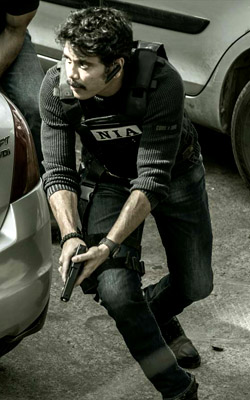 ADVERTISEMENT
This page was tagged for
Wild Dog telugu movie
Wild Dog reviews
release date
Nagarjuna Akkineni, Saiyami Kher
theatres list
Follow @fullhyderabad
Follow fullhyd.com on
About Hyderabad
The Hyderabad Community
Improve fullhyd.com
More
Our Other Local Guides
Our other sites
© Copyright 1999-2009 LRR Technologies (Hyderabad), Pvt Ltd. All rights reserved. fullhyd, fullhyderabad, Welcome To The Neighbourhood are trademarks of LRR Technologies (Hyderabad) Pvt Ltd. The textual, graphic, audio and audiovisual material in this site is protected by copyright law. You may not copy, distribute, or use this material except as necessary for your personal, non-commercial use. Any trademarks are the properties of their respective owners. More on Hyderabad, India. Jobs in Hyderabad.