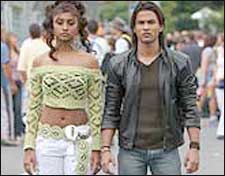 Ghazala Rizvi / fullhyd.com
EDITOR RATING
5.0
Performances
Script
Music/Soundtrack
Visuals
NA
NA
NA
NA
Suggestions
Can watch again
NA
Good for kids
NA
Good for dates
NA
Wait to rent it
NA
Sometimes, you wake up to discover that the nightmare is still on. That the night's over, but the dark stays. This is what it feels like living in Kalyug. You realize that there is a parallel under-world, breathing and alive, just near the brink of your existence. As an average man you seldom brush with it, but if you are unfortunate enough to, you can never surface again.

The flesh market and its allied services are the target of Mahesh Bhatt's Kalyug. Taking the thread from a true incident which happened with a couple in Gharwaal recently, Kalyug illustrates, and thankfully not in graphic detail, the innuendos of human-trafficking and its more potent cousin, the blue-film industry. But if you are looking for an all-out skin-show, you'll be disappointed.

Kalyug has Kunal Darr (Kunal Khemu), an ordinary young man who is going about the business of life, moored to his fathers's high ideals. Renuka (Smiley Suri) is a distant relative who arrives from Jammu to stay in Mumbai. Kunal is bewitched by her innocence, and she, by his kindness. A quick marriage is followed by a dream honeymoon, but soon Kunal's life comes crashing down all around him.

On his quest, Kunal gets a glimpse of how the market acquires a new crop of victims, from 10-year-old kids to old hags. Kunal allies with Ali (Emraan Hashmi) and succeeds in busting this international trade single-handedly, and almost effortlessly.

Kalyug is not shot in the stark, whetted documentary-style; nor does it try to be a sleazy B-grade soft-porn flick. While treading the thin line between the two, what it manages is become an average movie striving to be in the mainstream with enough bloody fist-fights and glitter to help it along.

Kunal Khemu has played all the tear-scenes well, with his bagful of good looks and deep-eyes. But director Mohit Suri's insistence on making him clean the Agean Stables in one smooth go, lacks credibility, and takes the sting out of the plot. Smiley Suri has given a moving performance, and she does look like a middle-class Jammu lass with her jewels and tresses done appropriately.

Amrita Singh looks stunning for her years, and has succeeded in capturing the role of a mother, a cold-blooded killer and a cut-throat biz-woman in her act. Emraan Hashmi, sporting a brow-ring and mouthing Anu Malik's peppy numbers, is perhaps the biggest asset for the film.

While you do get an elaborate tour of the Zurich's legalized skin trade and the city's hottest skin den, The Sin City, you don't get titillated - neither are you hit by any gut-wrenching disclosures. Kalyug has played it clean: it has not shown shocking or gross truths - nothing that will want you to vomit, and nothing that will make you jump in the sack either. It is depending on creating the it-can-happen-to-you-too feel, but falls short as the climax is unbelievable. Also, there are minor loopholes throughout the film, and you wish the movie could have been more tightly knit in its presentation.

ADVERTISEMENT
This page was tagged for
???? kalyug
kalyug
Kalyug
Kalyug hindi movie
Kalyug reviews
Follow @fullhyderabad
Follow fullhyd.com on
About Hyderabad
The Hyderabad Community
Improve fullhyd.com
More
Our Other Local Guides
Our other sites
© Copyright 1999-2009 LRR Technologies (Hyderabad), Pvt Ltd. All rights reserved. fullhyd, fullhyderabad, Welcome To The Neighbourhood are trademarks of LRR Technologies (Hyderabad) Pvt Ltd. The textual, graphic, audio and audiovisual material in this site is protected by copyright law. You may not copy, distribute, or use this material except as necessary for your personal, non-commercial use. Any trademarks are the properties of their respective owners. More on Hyderabad, India. Jobs in Hyderabad.