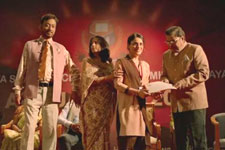 Kritika Deval / fullhyd.com
EDITOR RATING
6.0
Performances
Script
Music/Soundtrack
Visuals
8.5
4.5
6.0
6.0
Suggestions
Can watch again
Yes
Good for kids
Yes
Good for dates
No
Wait to rent it
Yes
This review must be prefaced by saying that any film that has Irrfan Khan and Deepak Dobriyal in a grudge match over a sweet shop is, IOHO ("In Our Humble Opinion" as per the fullhyd lingo where we pretend to be a collective organism), about as capable of being bad as a black hole is of contracting diarrhoea.

That said, we aren't entirely sure that Angrezi Medium is a good movie, either.

Tarika Bansal (Radhika Madan) has wanted to go abroad since she was an actual infant, and her father, Champak (Irrfan Khan), has been putting her off right up until he hits the wall of her teenage obstinacy. Champak also has a cousin, Gopi (Deepak Dobriyal), with whom he has an adversarial relationship over whose is the original Ghasitaram halwai. The two relationships don't have much to do with each other, except that if the latter conflict did not exist, the former, and main, plotline would have been resolved with far fewer shenanigans, and a shenanigan-free Homi Adjania film isn't a thing that exists.

Also, Kareena Kapoor Khan and Dimple Kapadia play a daughter and a mother that don't particularly like each other. Which is another plotline that doesn't have much value to it other than to somehow play mirror image to the main storyline of a devoted parent-child relationship.

So, anyway, Tarika has foren dreams and an average GPA, but hard work and determination see her through to just out of reach of her goals. Champak, who loves his daughter like nothing else in the world, cannot bear to see her sad. With the plot set up and the relationships established, there's nowhere to go but onto a rather wonky rollercoaster that sees Champak and co. brave skeevy conmen and immigration officers and cops and other increasingly perilous and outlandish obstacles, all so their Taru can go to a fancy college with immoral foreigners who ply her into sin with their angrezi ways and peer pressure. And then there's a car chase. The end.

If all of this seems rather incoherent, that's because it is. Instead of being one simple story that becomes convoluted for reasons of whimsy and satire, like any god-fearing Homi Adjania film, Angrezi Medium is a very many convoluted stories for reasons of whimsy and more whimsy, which then go on to become too tangled to unravel in a satisfactory manner. Any resolutions offered within the movie come across as both contrived and preachy in a way that's rather irritating. The preachiness does not come across as a surprise. Its hamfisted quality does.

All of this aside, Angrezi Medium is still a must-watch this week because its entire cast is utterly squee-inducing. Just between the two of them, Irrfan Khan and Deepak Dobriyal manage to draw attention away from most of the film's flaws with the way they slip underneath the skins of their characters and riff off of each other. Irrfan Khan's portrayal of the unique heartbreak of being a father to a child who wants to leave the nest while you want to keep them in there is entirely convincing.

Radhika Madan is, too, but does not have the experience to turn mediocre characters exceptional, with her character often ending up seeming like a plot device to the Champak and Gopi comedy show.

Kareena Kapoor Khan, Dimple Kapadia, Ranvir Shorey, Pankaj Tripathi, Kiku Sharda and the rest each shine for the blink of an eye that they occupy the screen, and leave you wanting more.

The music is upbeat but unexceptional, as is the cinematography.

Like that one dish you read about in the menu at a fancy restaurant, Angrezi Medium takes a bunch of great ingredients to turn out something mediocre, but these particular ingredients turn even mediocrity into something more palatable. 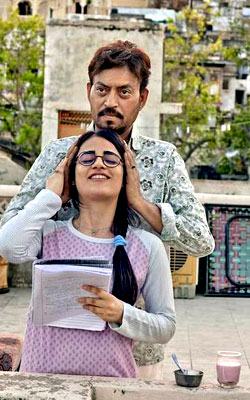 ADVERTISEMENT
This page was tagged for
Angrezi Medium hindi movie
Angrezi Medium reviews
release date
Irrfan Khan, Radhika Madan
theatres list
Follow @fullhyderabad
Follow fullhyd.com on
About Hyderabad
The Hyderabad Community
Improve fullhyd.com
More
Our Other Local Guides
Our other sites
© Copyright 1999-2009 LRR Technologies (Hyderabad), Pvt Ltd. All rights reserved. fullhyd, fullhyderabad, Welcome To The Neighbourhood are trademarks of LRR Technologies (Hyderabad) Pvt Ltd. The textual, graphic, audio and audiovisual material in this site is protected by copyright law. You may not copy, distribute, or use this material except as necessary for your personal, non-commercial use. Any trademarks are the properties of their respective owners. More on Hyderabad, India. Jobs in Hyderabad.