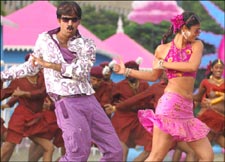 EDITOR RATING
6.0
Performances
Script
Music/Soundtrack
Visuals
NA
NA
NA
NA
Suggestions
Can watch again
NA
Good for kids
NA
Good for dates
NA
Wait to rent it
NA
The clown apparent of Telugu cinema has hit the screens again - and you can say that again. For, Khatarnak is a Ravi Teja film with the now assembly-line precision of a Ravi Teja film - it's Ravi Teja reprising Ravi Teja. If you are clear what you are going for, you're unlikely to be disappointed. If you're not, well, you will be from the next time.

So Khatarnak has 'em all - a comic first half, a vicious villian with bayonet and machete-wielding henchmen, some bloody fights, some mass numbers (including a song with the lyrics "Doma kudithe chikun gunya / Prema kudithe sukham gunya" that makes you want to kill yourself brutally), and a general take-home value of zero. It won't change the way you live your life - assuming, that is, that that song doesn't have any lasting effects on you - but it keeps you more entertained than whatever else you might have been doing in the time you chose to watch this.

So Das (Ravi Teja) is a small-time crook who is hijacked by an underworld don (Lal) to infiltrate the police force and pass on key information to him, since he has the required guile, and a spotless police record. There is a small hitch, though - getting into the police force requires "10th pass". And so, their first problem is getting Das to pass the SSC exams.

That has never been a long-term goal of Das' life, and it takes all the persuasion that a gang of goons can conceptualize to make him join school and start to study. That includes blackmailing him that they'll embroil him in a murder case, beating him up, and putting him in front of an oncoming train without informing the railway department first. Nothing works, though - Das still requires four options for the correct answer to 2 + 2, and then 3 lifelines.

The chink in his armor, however, is his huge crush on Nakshatra (Ileana), a teacher in the school who wears spaghetti tops and backless blouses to teach school students. So the villians blackmail her into acting like she loves him (though she actually despises him), but she just insults him, which has the desired effect anyway - he studies and passes.

He becomes a cop, and Nakshatra does fall in love with him, but in the course of his spywork for the don, her brother gets killed and the blame is on him, and she hates him all over again. He now turns against his bosses, and a huge battle starts.

The first half of Khatarnak looks inspired by Main Hoon Naa, but it has some pretty entertaining moments - though things might've been better if it were set in college like in the original instead of in school. It might not have worked with the script, but the film has plenty of chinks anyway.

For example, just how did Das set the goons on fire in school when he is the guy doused in petrol? Why does Nakshatra insult him right after looking very impressed after this scene? And the climax fight is as unrealistic as any in these superhero movies.

Watching Ravi Teja act is like watching Shammi Kapoor imitate himself - where his already boisterous act will become even more so because of the exaggeration in the mannerisms that any mimic does. The most hyperactive of Telugu heroes, Ravi Teja certainly ensures there's no dull moment when he's around, mostly by being a joker - his feminine hip-swaying swagger, his superfast and animated dialogue-delivery, and his rapidfire ripostes bring an energy to the screen that persuades you against asking yourself any fundamental questions.

Ileana is purely glamour - this being her first film after Pokiri, she might attract some masses, but then there's a lot more of her coming up this month and the next. The beauty that well-written heroine roles bring to a film is completely absent here - she is just a bachao babe in a standard Telugu mass movie.

There are a couple of hummable songs, especially Aa Gaganamlo. The comic track is led by Ravi Teja himself, and is the primary source of entertainment.

Someone should tell our cameramen that those concave effects to horizontally stretch images really, really suck. It's havoc on our eyes - they seem to do it just because it's perhaps tough and expensive, or because all the others are doing it, without any idea of whether people like it.

On the whole, this one is tolerable if you cannot find anything else to do. Certainly not worth Rs. 100 in a multiplex, however, unless you desperately need to get rid of some black money.
Share. Save. Connect.
Tweet
KHATARNAK SNAPSHOT

Dude(s), almost every Telugu movie I have (been forced to) watch(ed) (in APSRTC's Garuda busses) has Prakash Rai as the villian.

Notice the spelling? 'Rai' not 'Raj'. Damn it dude, when you can get former Miss Aishwarya Rai's name correctly, why not give this excellent actor some credit by referring to his real name.

But one more thing. When Eenadu interviewed this director Amma Rajasekhar, he said he made the movie with utmost care and has complete confidence on the script and that he is not gonna fail as other mass directors do. He in fact stressed on the issue that he will make only MASS movies and no CLASS movies as there is no market for CLASS movies. Now he seems to have got f****d to the core with this supposed to be very creative and safe MASS venture called Khatarnak. Just after the posters of Khatarnak were released I felt Ileana was looking way too much vulgar and not classy as she was in Pokiri... None of my frenz agreed as they still did not recover from the Pokiri Hangover. Now Thank You Hyderabad folks for confirming the same that she was indeed vulgarly portrayed.

had ta give 1 star

ADVERTISEMENT
This page was tagged for
khatarnak telugu movie director
khatrnak movi
mr khatarnak movie review
khatarnak telugu full movie
avvariki thalavachadhu prema song
Follow @fullhyderabad
Follow fullhyd.com on
About Hyderabad
The Hyderabad Community
Improve fullhyd.com
More
Our Other Local Guides
Our other sites
© Copyright 1999-2009 LRR Technologies (Hyderabad), Pvt Ltd. All rights reserved. fullhyd, fullhyderabad, Welcome To The Neighbourhood are trademarks of LRR Technologies (Hyderabad) Pvt Ltd. The textual, graphic, audio and audiovisual material in this site is protected by copyright law. You may not copy, distribute, or use this material except as necessary for your personal, non-commercial use. Any trademarks are the properties of their respective owners. More on Hyderabad, India. Jobs in Hyderabad.