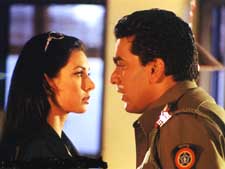 Feroz Hassan / fullhyd.com
EDITOR RATING
5.0
Performances
Script
Music/Soundtrack
Visuals
NA
NA
NA
NA
Suggestions
Can watch again
NA
Good for kids
NA
Good for dates
NA
Wait to rent it
NA
There are very few moments in a reviewer's career when he sees a director falter all through, mess up his priorities and come up with a cropper of a movie, and still empathize (not sympathize) with the guy. Reviewing Kasoor has brought me one. I share Vikram Bhatt's dilemma in choosing between concentrating on the film's plot and on Lisa Ray. And although my obvious choice should be the former, I cannot help it if it is non-existent.

I will start with Simran, played by Lisa of course, who is a fledgling corporate attorney in our country where copyright is understood as 'the right to copy'. She is called upon to defend a prominent journalist, Shekhar Saxena (Aftab Shivdasani), who has been accused of murdering his wife, who owned the publication. It turns out that Simran had been a criminal lawyer, but one wrongful case and she was through with it. She gives in, anyway. This part of the screenplay takes about ten minutes and it stays here for the next 90 minutes wherein the only development is that the two fall in love.

At the other end is a cop (Ashutosh Rana) with whom Simran had earlier fallen out and who is now inexplicably obsessed with prosecuting Shekhar. The next half of the movie is spent in the court, and it would be difficult to resist the temptation of guessing who wins. So when Shekhar walks away with her, the director finds that he's exhausted the reel length without even trying to solve the murder, and there isn't anyone to show for it. He starts right at the beginning, only there is no law this time around (that's the twist and you are not supposed to get it here).

It is bad enough that the movie looks like an extended ad, but the Bhatts don't stop at that. For the only scene that qualifies the movie as a thriller, or a movie to begin with, has been brazenly lifted from the so recent What Lies Beneath - quite uninspired in itself.

As for the performances, Aftab didn't have any misgivings of his efforts getting noticed, so he didn't try. That makes the duo one set of mannequins, especially when they are looking through the car's windshield. By the way, there's Ashutosh Rana who is trying to be another Sadashiv Amrapurkar and one Apurva something constantly smoldering the background.

Finally, with all apologies to the quake victims, I have hit upon an idea of a fund to raise money to make Lisa a real lawyer. How one would like to be accused of murder when one knows that she's going to be around! Donate generously!
Share. Save. Connect.
Tweet
KASOOR SNAPSHOT

ADVERTISEMENT
This page was tagged for
Kasoor hindi movie
Kasoor reviews
release date
Aftab Shivdasani, Lisa Ray
theatres list
Follow @fullhyderabad
Follow fullhyd.com on
About Hyderabad
The Hyderabad Community
Improve fullhyd.com
More
Our Other Local Guides
Our other sites
© Copyright 1999-2009 LRR Technologies (Hyderabad), Pvt Ltd. All rights reserved. fullhyd, fullhyderabad, Welcome To The Neighbourhood are trademarks of LRR Technologies (Hyderabad) Pvt Ltd. The textual, graphic, audio and audiovisual material in this site is protected by copyright law. You may not copy, distribute, or use this material except as necessary for your personal, non-commercial use. Any trademarks are the properties of their respective owners. More on Hyderabad, India. Jobs in Hyderabad.