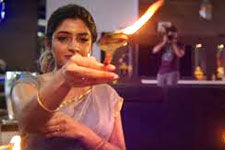 Chaitanya Karthik / fullhyd.com
EDITOR RATING
5.0
Performances
Script
Music/Soundtrack
Visuals
4.0
5.0
4.0
4.5
Suggestions
Can watch again
No
Good for kids
No
Good for dates
No
Wait to rent it
No
When a movie is promoted to be a thriller, what you look forward to is being treated to a balanced dose of surprises and shocks that leave you saying ooooh. But promising to deliver something and actually delivering that are two different things, of course, as Raagala 24 Gantallo amply shows.

The movie begins with three convicts, imprisoned for raping and murdering a girl, escaping prison, and sneaking into the house of Vidya (Eesha) to evade the police chasing them. Vidya is waiting for her husband to return home, and the convicts tell her that they want to stay in the house for just about an hour. And when somebody rings the doorbell, they threaten to kill her if she tells anyone about them.

They then go to hide in the closet, but are shocked when they find the corpse of Rahul (Satyadev) in there. And with that, the wheels of Raagala 24 Gantallo are set in motion.

Vidya then narrates everything that's happened between Rahul and her to the three convicts. And this gives you a clue as to how logic and rationale are going to be treated in the movie - a woman who's just killed her husband by accident suddenly has three burly and scary convicts break into her house and threaten to kill her, and she starts narrating her flashback to them.

Director Sreenivass Redde however has the craft to ensure that you focus on the events leading up to Rahul's murder and not on the absence of a tad bit of logic. The story settles down gradually in the first half, and the narrative is paced well. The characters are all established slowly but meticulously, and different layers of the plot are sequentially uncovered. By intermission, the intrigue that Raagala 24 Gantallo aspires to create has been generated.

That is where Redde runs out of steam, however, for it's all downhill from there. The plot, the thrills, the suspense, the drama - they all collapse like a pack of cards. And the main reason is that the movie is devoid of an emotional core, and it is hard to feel anything for any character.

Vidya, who is the protagonist of the story, is supposed to make you feel sorry for her because of her story. You don't. Maybe the director or the writer foresaw that, which is why they have the three escaped convicts overtly sympathizing with her. The other characters are barely believable, and trying to be invested in them is tedious. Sriram's character is so inconsistent that you wonder what they were smoking while writing it. He is so loud that even on one of the rare occasions when he says something sensible, you fail to appreciate it. And Krishna Bhagwan has an absolutely cringy two-minute role that should have been lying on the editing table.

The only person who has some kind of an impact is Satyadev, whose acting flair is so good that it's easy for you to hate his character. We hope the guy chooses better scripts.

Raagala 24 Gantallo tries to salvage things with all the plot twists, but it only turns out a confusing mess, and the movie completely ceases to be intriguing after a stage. There are quite a few plot-holes and flaws in logic, some of which are not as insignificant as the one mentioned above, and they seriously damage the film.

Neither the songs nor the background music add any value to the movie, either.

Raagala 24 Gantallo is one more example of an interesting plot let down by poor execution. Watching this one leaves you wondering plenty of times about what might have been, and unless that's the reason you like to catch movies, you can safely skip this one.
Share. Save. Connect.
Tweet
RAGALA 24 GANTALLO SNAPSHOT 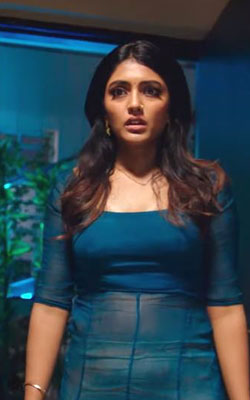 ADVERTISEMENT
This page was tagged for
raagala 24gantallo movie main characters convicts names
ragala 24 gantallo movie movierulz watch online
ragala 24 gantallo telugu movie watch online
Ragala full Telugu movie
ragala 24 gantallo movie himdi download
Follow @fullhyderabad
Follow fullhyd.com on
About Hyderabad
The Hyderabad Community
Improve fullhyd.com
More
Our Other Local Guides
Our other sites
© Copyright 1999-2009 LRR Technologies (Hyderabad), Pvt Ltd. All rights reserved. fullhyd, fullhyderabad, Welcome To The Neighbourhood are trademarks of LRR Technologies (Hyderabad) Pvt Ltd. The textual, graphic, audio and audiovisual material in this site is protected by copyright law. You may not copy, distribute, or use this material except as necessary for your personal, non-commercial use. Any trademarks are the properties of their respective owners. More on Hyderabad, India. Jobs in Hyderabad.