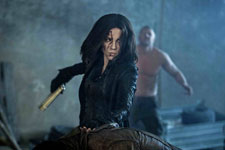 Swaroop Thotada / fullhyd.com
EDITOR RATING
5.0
Performances
Script
Music/Soundtrack
Visuals
6.0
4.0
6.0
7.0
Suggestions
Can watch again
No
Good for kids
No
Good for dates
Yes
Wait to rent it
Yes
In a scene where she is training some intern death-dealers to combat Lycans, Selene tells them that the werewolves are the most vulnerable when they are in their animal form since their wiring is rendered more primal during that time. By that logic, wouldn't the feelings and emotional approaches of these predatory species be more drastically different than the way the Underworld films portray? Human psyche has surely undergone as much evolution as the anatomy, and our sophistication grew as our claws flattened and became fingernails. But how come these vampires and werewolves that still bite, hunt and revel in bloodshed are equipped with human-like emotions and sophistication?

Maybe we are forgetting that though these characters are woven into a plot involving blood-feuds, betrayals, revenge and parenthood, they are basically as shallow as the plot. While the film might want us to believe that these characters talk with emotionally sterile facial expressions because of their haunting past or their repressed pain, they actually talk like that to look cool. And to assume that this subtle misguidance is deliberate is to give the writing too much credit, given how it dries out humour and retains cheesiness.

Anyway, this kind of nitpicking is exactly what you should restrain yourself from if you want to buy a ticket for this film. Because what Underworld: Blood Wars promises primarily is Kate Beckinsale in her skin-tight leather suit delivering mid-air punches and pumping iron in breathtaking action sequences. This franchise survived despite the fiercest panning from critics because the makers know that the demographic these movies pander to watch not for dramatic sophistry but for easy escapism and adrenaline rush.

Blood Wars starts with a chase where Selene is hounded by Lycans before they get slaughtered by her anyway. These Lycans are the henchmen of a new powerful leader called Marius (Tobias Menzies), who is after Selene to extract a secret from her: the location of her daughter. As she (the daughter) is the first pure-born hybrid, her blood is of utmost importance to Marius. Only, after the death of her husband Michael Corvin (Scott Speedman), Selene sent her daughter to a place even she doesn't know. And the trademark stunts and chases ensue.

The film retains the characteristic gloomy look of the series by using the blue-black-gray colour palette. Like in all of its predecessors, the majority of the proceedings take place in and around dimly-lit gothic castles of stunning architecture, and between good-looking men and women draped in either stupendous medieval fancy ware or slick leather jackets. But though the plot and costumes lean towards a throwback style, the vampires seem to have updated themselves with cutting-edge weaponry and equipment. We see an automatic security system fitted in their castle, and them using intriguing customised hi-tech devices.

Laura Pulver as Samira gives you an enjoyable villainy with her overtly theatrical accent that deliberately hints that the actress is having fun playing it. Theo James as David and Charles Dance as his father Thomas are shoehorned into this otherwise clueless plot and do not make any impact. Dance is criminally wiped out of the story too soon, and David is no far throw from the rest of the fabricated characters. The film could have benefited by not taking itself too seriously, but the only time it appears to having an ear for this advice is when it pulls off some outright hilarious stunts. But the hilarity was probably unintentional.

The fights are derived from the previous films and wear out pretty fast, but the one between Samira and David, though long-drawn, is brutal, hard-hitting and fastidious. The gore is uninhibited, but non-effective because we are already numbed by the spilling and splashing of blood and flesh too frequently.

Underworld's main drawback is its inept writing that relies too much on CGI gore-fests and sacrifices plot coherence for effects and genre thrills. It cannot widen its fan-base unless it addresses this problem, but that is highly unlikely and too late. A sequel seems to be already on the cards, and I doubt whether even the most loyal fans are looking forward to it. But then, I guess they will watch that anyway.
Share. Save. Connect.
Tweet
UNDERWORLD: BLOOD WARS SNAPSHOT 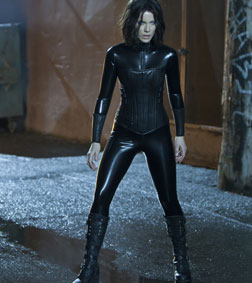 ADVERTISEMENT
This page was tagged for
Underworld: Blood Wars english movie
Underworld: Blood Wars reviews
release date
Kate Beckinsale, Theo James
theatres list
Follow @fullhyderabad
Follow fullhyd.com on
About Hyderabad
The Hyderabad Community
Improve fullhyd.com
More
Our Other Local Guides
Our other sites
© Copyright 1999-2009 LRR Technologies (Hyderabad), Pvt Ltd. All rights reserved. fullhyd, fullhyderabad, Welcome To The Neighbourhood are trademarks of LRR Technologies (Hyderabad) Pvt Ltd. The textual, graphic, audio and audiovisual material in this site is protected by copyright law. You may not copy, distribute, or use this material except as necessary for your personal, non-commercial use. Any trademarks are the properties of their respective owners. More on Hyderabad, India. Jobs in Hyderabad.