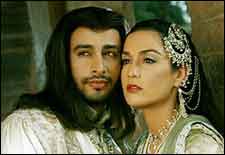 C Venkatesh / fullhyd.com
EDITOR RATING
5.0
Performances
Script
Music/Soundtrack
Visuals
NA
NA
NA
NA
Suggestions
Can watch again
NA
Good for kids
NA
Good for dates
NA
Wait to rent it
NA
Taj Mahal is one movie whose glorious camera sweeps and amazing background score you don't want to catch on a dinky little video screen from the tenth row of that "Volvo" Video Coach, with its Made-In-Hurry sound system. Unfortunately, a week or two from now, that's where you'll have the highest probability of seeing it.

There's nothing wrong with the premise, and not very much wrong with the execution either. The main problem lies in the length. 180 minutes of two devoted lovers who spend all their camera-conscious time gazing into each others eyes is 60 or 90 minutes too much. Properly edited, this could have been a snappy and enjoyable experience. As it stands, it's soporific, but enjoyable every time you wake up from your 40 winks. This is, after all, a story that's been told, retold and rehashed for centuries. What's more, the director's chosen love over gold, steering clear of any Mughal-intrigue except for the transparent and predictable romance-blocking manouevers.

Given the large number of "historical" extravaganzas that have deservedly vanished without traces, Taj Mahal is a pleasant surprise. Liberties with history are within the limits of poetic license, and the focus is kept on the title - the "eternal love story". Many story-tellers lose their way introducing sideshows that grow larger than the main story, but in this case the director (Akbar Khan, who also co-produced it, and who also co-wrote it - these Khan brothers don't do things in halves!) has done a commendable job of keeping his eyes on the road and his hands upon the wheel.

He starts his tale briefly replaying the downfall of Shah Jahan (Kabir Bedi, whose make-up artist should be strung up by the thumbs) at the hands of Aurangzeb (Arbaaz Khan). The camera angles are excellent, and the martial mood is well created with extravagant sets and apposite music. But in a lot of scenes, the special-effects seem to lack that vital je na sais quoi.

Jahanara (Manisha Koirala, who doesn't make much of what is a miniscule role to begin with) comforts her father and leads him into a flashback. Which, of course, is where the story really begins. Sonya Jehan, as the young Arjumand who later becomes Mumtaz Mahal, is just about adequate. She is overshadowed by a very perky Pooja Batra as Noor Jahan, who comes as a welcome relief - if Batra can turn out performances like this one, she deserves more recognition from Bollywood.

Akbar Khan and his cast are comfortable cooing like turtle-doves, but are not very convincing being intrigue-ridden Mughals. Efforts to express outrage, frustration, despondence and other such emotions are not convincing at all. The exceptions are Aurangzeb, who is sometimes chilling, and Noor Jahan, who is quite easily the lifeblood of this movie.

The cinematography is excellent, with (sometimes overly) vivid colors and an excellent sense of camera-domination. The sets are done quite well - pre-release publicity claims this is the most expensive film ever made in Bollywood - but some of the scenes seem to be subliminal tributes to Matrix and Jurassic Park. Not all movies gain from slow motion fights or from soldiers executing triple-somersaults when felled. The researchers should have watched a little more of historical tours-de-force, and a little less of The Lord of the Rings. The special effects are decidedly tacky. Fortunately, there are very few of them.

There are also, surprisingly, very few songs. Only one is even rhythmic. You'd expect more from Hariharan, but it's not to be. The dialogues are penned in what your linguistically-challenged reviewer concludes is chaste Urdu. Hyderabadis will enjoy the language, though Hindi-speakers may struggle with some of the phrases. The background score is outstanding. Not surprising, since the credits attribute it to Naushad. Purists would look for the lighting, to change with the story's mood, but Akbar Khan seems to prefer even his stormy nights very well-lit. The background score does a great job of making up for this.

The choreography is atrocious. Saroj Khan is given joint credit for the few dances there are, but perhaps she was thinking of something else.

Refreshingly, there's almost no display of flesh, as costume designer Anna Singh sheaths the actors from head to toe in period costumes, except for a surprisingly liberal display of thigh and decolletage on the young Shah Jahan's wedding night. The today's de-riguer lip-locks are very cleanly done. There's also very little overt violence - only three scenes contain any blood or implicit violence - which means you can safely take your kids. Of course, if you can make them sit through all three hours, they have decidedly more patience than your reviewer.

All in all, an A++ for being extremely politically-correct in more respects than one, an A+ for avoiding chauvinism and stereotypes, an A+ for sticking to the promised theme, an A for effort, a B for acting, and a B- for plot. Unfortunately, an F for editing.
Share. Save. Connect.
Tweet
TAJ MAHAL SNAPSHOT

ADVERTISEMENT
This page was tagged for
Taj Mahal hindi movie
Taj Mahal reviews
release date
Zulfiqar Syed, Sonya Jehan
theatres list
Follow @fullhyderabad
Follow fullhyd.com on
About Hyderabad
The Hyderabad Community
Improve fullhyd.com
More
Our Other Local Guides
Our other sites
© Copyright 1999-2009 LRR Technologies (Hyderabad), Pvt Ltd. All rights reserved. fullhyd, fullhyderabad, Welcome To The Neighbourhood are trademarks of LRR Technologies (Hyderabad) Pvt Ltd. The textual, graphic, audio and audiovisual material in this site is protected by copyright law. You may not copy, distribute, or use this material except as necessary for your personal, non-commercial use. Any trademarks are the properties of their respective owners. More on Hyderabad, India. Jobs in Hyderabad.