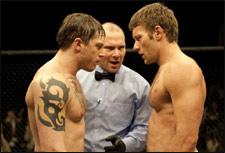 Nupur Barua / fullhyd.com
EDITOR RATING
5.0
Performances
Script
Music/Soundtrack
Visuals
6.0
5.0
7.0
6.0
Suggestions
Can watch again
Yes
Good for kids
No
Good for dates
No
Wait for OTT
No
The latest entrant to the sub-genres of fight movies, that include boxing (the Rocky series, Cinderella Man, The Fighter), wrestling (Ready To Rumble, Nacho Libre), and martial arts (The Karate Kid, Crouching Tiger, Hidden Dragon), is mixed martial arts, or MMA (think Tekken). According to Wikipedia, MMA is a "full contact combat sport that allows the use of both striking and grappling techniques". Add to this a complicated relationship between two brothers, and their father, and you have a masala Hollywood film ready to be released across the world.

The problem is, The Fighter got there first. And anything that follows that exemplary portrayal of sibling rivalry and love is bound to pale in comparison, which is unfortunate for movies like Warrior.

Here's how the story goes. Tommy Riordan (Tom Hardy) returns to his hometown, Pittsburgh, where his once-alcoholic father, Paddy Conlon (Nick Nolte) lives. Despite his father's metamorphosis into a repentant, church-going, alcohol-free old man, Tommy is in no mood to forgive him for his abusive past.

Meanwhile, Tommy's older brother, Brendan Conlon (Joel Edgerton) teaches in a high school in Philadelphia, and he and his wife Tess (Jennifer Morrison) have a problem making ends meet. Brendan is a former MMA fighter, and he realises that the only way to save his family from bankruptcy is to get back to fighting in the 'cage' - an 'evolved' version of the traditional ring.

Tommy has some skeletons in the closet, and he needs some money desperately, so, in spite of all misgivings, he recruits his father to train him for the biggest MMA tournament of the year. A twist of fate follows, and leads to a showdown between the estranged brothers.

Admittedly, this is not the run-of-the-mill Rocky-vs-Drago story. Here, the opponents are both positive lead characters, and both have their reasons for getting into the cage.

But then, the script has major flaws with respect to the relationship between the father and his sons. Both Brendan and Tommy treat their father like dirt, and the cruelty is a little difficult to digest. Nick Nolte as the pathetic man puts on a fine performance, and your heart does go out to him. His screen time, however, is rather limited for somebody who ruled the box office not too long ago.

There are other inconsistencies in the script that deserve a mention. One is never clear what the rules of the MMA competition are, and you cannot figure out if a contestant is winning or losing (this is where the 2 commentators, Bryan Callen and Sam Sheridan, come in handy). It is never specified how these ordinary contestants entered this world-class tournament in the first place. And if Tommy is a deserter from the US Army, why is he allowed to continue fighting?

Also, you may become a little biased towards Brendan, who seems like a nice man with a genuine need for money, but Tommy is a rather tragic figure himself. Tommy's constant anger is not explained, and Tom Hardy grimaces and grunts throughout the movie. Also, his steroid-enhanced physique, dotted with tattoos, is almost ugly.

Joel Edgerton, on the other hand, is flabby. Despite a willing suspension of disbelief, it becomes rather difficult to accept that these two unfit men waltz their way into the finals. As an actor, however, Joel is a treat, notwithstanding the forced American accent.

The training sessions for the two brothers are glossed over in a confusing and lengthy montage of shots. The fight sequences in the cage, however, are shot extremely well, and worth watching. Also, in production design, the contrast between the worlds of the two brothers is depicted in contrasting styles quite effectively. The inclusion of Beethoven's Ode To Joy as Brendan's marching music is a neat touch.

At 140 minutes, Warrior is a little tedious, but the climax more than makes up for it. The last half hour should not be missed, but you can take a stroll before that to stretch your cramped legs. Our advice - rent a DVD of The Fighter whether you watch Warrior or not.
Share. Save. Connect.
Tweet
WARRIOR SNAPSHOT

ADVERTISEMENT
This page was tagged for
Warrior english movie
Warrior reviews
release date
Nick Nolte, Joel Edgerton
theatres list
Follow @fullhyderabad
Follow fullhyd.com on
About Hyderabad
The Hyderabad Community
Improve fullhyd.com
More
Our Other Local Guides
Our other sites
© Copyright 1999-2009 LRR Technologies (Hyderabad), Pvt Ltd. All rights reserved. fullhyd, fullhyderabad, Welcome To The Neighbourhood are trademarks of LRR Technologies (Hyderabad) Pvt Ltd. The textual, graphic, audio and audiovisual material in this site is protected by copyright law. You may not copy, distribute, or use this material except as necessary for your personal, non-commercial use. Any trademarks are the properties of their respective owners. More on Hyderabad, India. Jobs in Hyderabad.