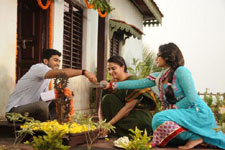 Ravi Kandala / fullhyd.com
EDITOR RATING
6.0
Performances
Script
Music/Soundtrack
Visuals
8.0
6.0
7.0
8.0
Suggestions
Can watch again
No
Good for kids
No
Good for dates
No
Wait to rent it
No
There are times when you see something where the whole turns out lesser than the sum of the parts. Malli Malli Idi Rani Roju (MMIRR) is a perfect example of this - the film features great dialogues, good cinematography, good performances and a decent script, but they just do not come together.

MMIRR is a classic love story - and by classic we mean that it follows the template of all other Tollywood love stories. Two lovers united by their love but divided by the screenplay of the movie they are in, a second half that solely strives to keep them apart, and a climax in an airport - can it get filmier than this?

The film features Raja Ram (Sharwanand), a national level runner, and Nazira Khanum (Nitya Menon). The two are classmates in college and fall head over heels in love with each other. Circumstances keep them apart for over a decade, and the next time they meet, both of them have teenaged children. Did the pair really move on? What about the undying love they claimed to have for each other? Is the story of this movie truly unique? You'll have to watch MMIRR to find the answers to these questions - or just guess the answers from the millions of Telugu movies you've seen so far.

MMIRR comes from a sensible director - that much is for sure. It is beautifully written - both characters are given good background stories and fleshed out well, even if it means that this exercise takes up a good part of the film. The dialogues are sensible, though they do get slightly heavy towards the second half. The film is also shot beautifully, and the sea in Vizag is a constant presence that enhances most scenes in the movie.

The performances are also consistently good. Sharwanand is reliable and shows his flair for an offbeat storyline yet again. And Nithya Menon - is there another contemporary heroine who does not show an inch of skin but makes up by emoting with just her eyes? The first half largely features her in a burkha, and it's not just the hero but most of the film's audiences that fall in love with her. The supporting performances are also good and add the right gravitas to the film.

Where MMIRR falters is in its concept of pure love. The scenes where Menon talks about that to her daughter (played with some amount of disdain by Tejasvi Madivada) are a bit too purist for the Facebook generation. They can remind you of the first reactions of Aamir Khan and gang in Rang De Basanti when they first read the script of the Bhagat Singh play they are expected to act in.

MMIRR is a slow and beautiful love story - more in the Gautham Menon mode with long reams of dialogue and a hero whose love story begins in his youth and ends when he's fairly older. If that is your cup of tea, then MMIRR will seem like a classic, else you are most likely to leave the theatre by the end of the first half.
Share. Save. Connect.
Tweet
MALLI MALLI IDI RANI... SNAPSHOT
MALLI MALLI IDI RANI ROJU SNAPSHOT 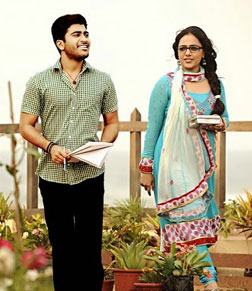 ADVERTISEMENT
This page was tagged for
Malli Malli Idi Rani Roju telugu movie
Malli Malli Idi Rani Roju reviews
release date
Sharvand, Nithya Menon
theatres list
Follow @fullhyderabad
Follow fullhyd.com on
About Hyderabad
The Hyderabad Community
Improve fullhyd.com
More
Our Other Local Guides
Our other sites
© Copyright 1999-2009 LRR Technologies (Hyderabad), Pvt Ltd. All rights reserved. fullhyd, fullhyderabad, Welcome To The Neighbourhood are trademarks of LRR Technologies (Hyderabad) Pvt Ltd. The textual, graphic, audio and audiovisual material in this site is protected by copyright law. You may not copy, distribute, or use this material except as necessary for your personal, non-commercial use. Any trademarks are the properties of their respective owners. More on Hyderabad, India. Jobs in Hyderabad.