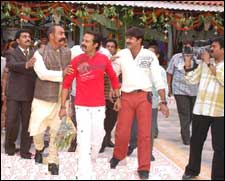 EDITOR RATING
3.0
Performances
Script
Music/Soundtrack
Visuals
NA
NA
NA
NA
Suggestions
Can watch again
NA
Good for kids
NA
Good for dates
NA
Wait to rent it
NA
It’s very easy to put all the blame for the debacle of Mayajaalam on just its director S V Krishna Reddy. And since we like to do very easy things, we’ll do just that.

Indeed, the time since his last hit and now can be used as a unit to measure generation gaps. If a movie you make today is similar to movies you made a decade back, then it means that you are like the proverbial cat that closes its eyes and thinks the world isn’t seeing it. Krishna Reddy chooses to stick to genres that worked a long time back, refusing to recognize that audiences like different kinds of movies now – basically, he sticks to doing what he likes to do (and perhaps, only what he can do), and hopes the world hasn’t changed.

Mayajaalam has no clear script. It flounders from comedy to crime to romance to family sentiment, with no central theme. There is one thread about a mistaken identity where Swati (Poonam Kaur) mistakes Vamsi (Srikanth) for her betrothed instead of Chatrapati (Shafi), one where 4 ghosts (Ali, Venu Madhav, Krishna Bhagawan and Brahmanandam) are trying to take revenge on Pradeep (Pradeep Rawat) and Rajendra (Sayaji Shinde), and one where Vamsi’s brother (a police officer) is taken hostage by Pradeep for investigating him.

Krishna Reddy then neither keeps this an easy romance peppered with comedy, nor does he make it a crime/action thriller. The romance is practically absent, with the heroine’s cumulative screentime (excluding songs) being about 8 minutes. The comedy is too ordinary and clichéd to make you even smile most of the time – a whole pantheon of Telugu comic stars is colossally wasted due to poor creativity in thinking up situations and dialogues. And the crime/action part is like eating avakai annam with mamidi pandu – neither here nor there, as it is mixed up with the attempts at comedy.

Vamsi runs a marriage bureau, and lands the contract to marry Chatrapati, the son of MP Pradeep, to Swati, the daughter of Dr. Rajendra. However, the wrong photo – that of Vamsi – goes to Swati, and she is love with Vamsi. Now Pradeep is a crook and murderer, and has killed Ali and Venu Madhav, who become ghosts seeking revenge. Rajendra is also a criminal who sells off organs of his patients after killing them, and two of his thus murdered patients also become ghosts (Krishna Bhagawan and Brahmanandam).

Vamsi’s brother is an inspector investigating Pradeep, and gets beaten up and kidnapped bythe latter even as Vamsi himself is handling the marriage. The film now becomes a mixture of comedy with the ghosts fooling around, and …well, nothing else important. Like we said, the romance is non-existent, and the crime/revenge drama is all diluted.

Srikanth doesn’t have much to do, and is just a glorified extra in the film. The performances are all fine, with a mention for Shafi. The songs, composed by Krishna Reddy himself (who’s also done the screenplay and editing), have to be heard to be believed, and that’s a high price to pay to believe them.

The first half is ominous, and the second half is the reason it is. Wait for this one to hit your TV screens, and miss it again then.
Share. Save. Connect.
Tweet
MAYAJAALAM SNAPSHOT

Well Krishna Reddy did not exactly make hits just decades ago. He did make Pellam Orelithe. I really should have kicked him in the mouth when I ran into him at Cinema Paradiso.

It is a comedy movie. Expecially the 2nd half. can see the movie only for time pass. Songs were boring and looked silly.

ADVERTISEMENT
This page was tagged for
Mayajaalam telugu movie
Mayajaalam reviews
release date
Srikanth, Poonam Kaur
theatres list
Follow @fullhyderabad
Follow fullhyd.com on
About Hyderabad
The Hyderabad Community
Improve fullhyd.com
More
Our Other Local Guides
Our other sites
© Copyright 1999-2009 LRR Technologies (Hyderabad), Pvt Ltd. All rights reserved. fullhyd, fullhyderabad, Welcome To The Neighbourhood are trademarks of LRR Technologies (Hyderabad) Pvt Ltd. The textual, graphic, audio and audiovisual material in this site is protected by copyright law. You may not copy, distribute, or use this material except as necessary for your personal, non-commercial use. Any trademarks are the properties of their respective owners. More on Hyderabad, India. Jobs in Hyderabad.