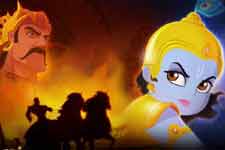 Nupur Barua / fullhyd.com
EDITOR RATING
6.0
Performances
Script
Music/Soundtrack
Visuals
6.0
5.0
7.0
6.0
Suggestions
Can watch again
Yes
Good for kids
Yes
Good for dates
No
Wait for OTT
No
Indian mythology seems to have found a new lease in the form of animation films, if recent releases like Chhota Bheem and Arjun The Warrior Prince are any indication of trends. And now, to the delight of kids all over the country, Vikram Veturi (director) presents India's first stereoscopic animation film, Krishna Aur Kans, based on the legend of the bad mama and the heroic bhanja.

Kans (Om Puri, Voice) is plagued by the prophecy that his own blood, his sister Devki's son, will be his death and downfall. Kans is an evil man, a ruler who loves to loot and kill his own subjects. He therefore has no qualms about killing his sister's children, one by one.

There is, however, one little newborn baby who survives. He is Krishna (Prachi Save, Voice), who grows up in a place far from his uncle's tyranny. He is a mischievous child, who steals butter and pesters milkmaids and little girls. His foster mother (Juhi Chawla, Voice), who fails to discipline him, soon realises that he is no ordinary kid. So does Kans, who learns of Krishna's existence and sends demons and monsters to destroy him, all in vain.

The final showdown between Krishna and Kans results in the destruction of the latter, as was foretold, and the world is a happy place again.

As far as stories go, this is a classic - the boy hero who saves the world from evil. It is a story of the triumph of goodness, and an important lesson for the young audience of today. The problem is the length. At almost two hours, the movie seems to play in a loop after a point - Krishna being naughty, Krishna threatened by some wicked demon, Krishna defeating that demon, and back to Krishna being naughty again. Young children will enjoy the antics of Krishna and his gang, which includes the young Balram and a very young Radha, but adults may get a little impatient after a point.

The animation is better than most that we have seen so far, but as far as standards as concerned, Indian animation has a long way to go to become internationally acceptable. The dimensions of characters seem a little inconsistent, especially in terms of ratio, but that may be because of the projection.

The 3D is unnecessary, and sometimes painful. The production design is inspired by calendar and comic art, and thus familiar, visually, but the lack of originality is obvious. However, Krishna is endearing even when he scowls (especially when he does), so the objective - to make Krishna a lovable rogue - is achieved. The black-and-white sequences are the most interesting bits of the movie, and inspiring, too.

Shantanu Moitra's music adds life and colour to what could have become an average movie. The tunes are catchy, and will definitely top the charts with youngsters. The movie even has an item song - an attempt to contemporarise ancient mythology, perhaps?

Om Puri sounds good as Kans, but only as long as his voice is low and bass. The minute the pitch rises, the voice cracks, and does not suit the much younger villain.

The other actors play their parts well, and Juhi Chawla's voice as the mother is distinctive. The star of the movie is Prachi Save, who lends her voice to the young hero - the modulation is perfect. The dialogues could have been in simpler Hindi, though.

Krishna Aur Kans is a perfect movie for children this weekend, and has enough fun-filled and awe-inspiring moments to keep both the young and the old entertained. It is a must-watch, if you can overlook the few glitches in the technology department. Revisiting ancient lore is always compelling, and remember, this is a children's movie (despite the item number), so leave your cynicism behind.
Share. Save. Connect.
Tweet
KRISHNA AUR KANS SNAPSHOT 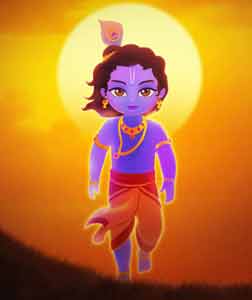 ADVERTISEMENT
This page was tagged for
Krishna Aur Kans hindi movie
Krishna Aur Kans reviews
release date
Om Puri (Voice), Juhi Chawla (Voice)
theatres list
Follow @fullhyderabad
Follow fullhyd.com on
About Hyderabad
The Hyderabad Community
Improve fullhyd.com
More
Our Other Local Guides
Our other sites
© Copyright 1999-2009 LRR Technologies (Hyderabad), Pvt Ltd. All rights reserved. fullhyd, fullhyderabad, Welcome To The Neighbourhood are trademarks of LRR Technologies (Hyderabad) Pvt Ltd. The textual, graphic, audio and audiovisual material in this site is protected by copyright law. You may not copy, distribute, or use this material except as necessary for your personal, non-commercial use. Any trademarks are the properties of their respective owners. More on Hyderabad, India. Jobs in Hyderabad.