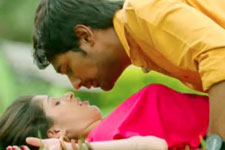 Ravi Kandala / fullhyd.com
EDITOR RATING
2.0
Performances
Script
Music/Soundtrack
Visuals
3.0
2.0
2.0
3.0
Suggestions
Can watch again
No
Good for kids
No
Good for dates
No
Wait to rent it
No
Lava Kusa, like the name itself hints, has Varun Sandesh playing two different roles - Prem Kumar alias Lav Kumar who drives a cab for the Drinking Cabs company, and Kushal Kumar (Kush), a guy who's running away from an arranged marriage.

One day Lav and Kush both happen to be outside a bar in Hyderabad. Within minutes, they see each other, act mildly surprised that they resemble each other, take the names of a few movies where such things happen, and then decide to become best friends and share a room. Kush then tells Lav that he needs to find a girl to fall in love with. The two set out on a search and find Satya (Ruchi Tripathi) posing as a navel-baring Yogini. Kush falls for her, while Lav falls in love with the girl Kush ran away from, Subbalakshmi (Richa Panai).

Lav and Kush decide that they need money and loads of it. They see an ad for a missing child in a newspaper and decide to find him and claim the reward. How this plan turns turtle and the two get buried neck deep in trouble forms the rest of the film.

Now, making a movie where an actor plays a double role isn't easy. The actor needs to understand the two characters, bring out the subtle differences in them through his portrayal, and make the audience really believe that they are two different characters. Varun Sandesh, who was probably half decent in his debut, is a performer whose histrionic skills have progressively degraded with each subsequent film, and he's definitely not the best choice to best do a double role. All that he does to differentiate the characters is wear a T-shirt and a stud for one character, and a shirt without the stud for the other.

The film wanders all over the place most of the time with scenes stretching longer than necessary, and when the time comes to wrap up the plot, one of the two characters suddenly turns superhero bashing up twenty goons singlehandedly. The director also decides to go the sleaze route to woo the mass audiences, with a beach song that should have been enough in itself to give the movie an A certificate. Richa Panai, who plays a village belle in the film, suddenly goes all glam in this number, wearing the teensiest of bikini tops and hot pants - enough to get the front-benchers whistling even in this day and age.

The supporting cast is mostly over the top. Brahmanandam is brought in for a cameo towards the end, and he's barely funny. When you see him in roles like these, you wonder why he's accepting them even at this stage of his career.

The technical values are middling - most of the budget seems to have been allocated to the overseas song shoots. The way the double role is shot is terrible - you can clearly make out that the scenes were shot separately and stitched together.

Lava Kusa is an abomination - the censors should've banned the movie just because it slanders the name of one of the greatest classics of Telugu cinema. You can still help rectify the colossal error and enable its early demise by staying away from the theatres.
Share. Save. Connect.
Tweet
LAVA KUSA SNAPSHOT 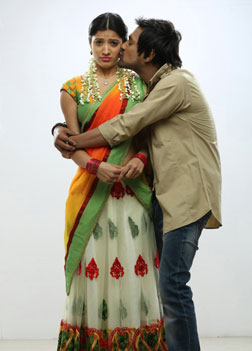 ADVERTISEMENT
This page was tagged for
Lava Kusa telugu movie
Lava Kusa reviews
release date
Varun Sandesh, Richa Panai
theatres list
Follow @fullhyderabad
Follow fullhyd.com on
About Hyderabad
The Hyderabad Community
Improve fullhyd.com
More
Our Other Local Guides
Our other sites
© Copyright 1999-2009 LRR Technologies (Hyderabad), Pvt Ltd. All rights reserved. fullhyd, fullhyderabad, Welcome To The Neighbourhood are trademarks of LRR Technologies (Hyderabad) Pvt Ltd. The textual, graphic, audio and audiovisual material in this site is protected by copyright law. You may not copy, distribute, or use this material except as necessary for your personal, non-commercial use. Any trademarks are the properties of their respective owners. More on Hyderabad, India. Jobs in Hyderabad.