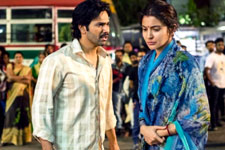 T J Reddy / fullhyd.com
EDITOR RATING
6.0
Performances
Script
Music/Soundtrack
Visuals
7.0
5.0
5.0
7.0
Suggestions
Can watch again
No
Good for kids
Yes
Good for dates
Yes
Wait to rent it
No
India doesn't need the magical world of Disney. We have Yash Raj and Dharma Productions to fulfil all our cravings for the fantastical.

Indeed, Yash Raj's and Dharma Productions' catalogues of films have defined mainstream romance for a few generations now. Whether they featured Amitabh and Rekha, Shahrukh and Kajol or Varun and Alia, these light, breezy and saccharine romances have been consumed by Indian audiences for decades. Yes, the movies have gradually altered their settings from grandiose castles built for megalomaniacs to the cramped streets of small-town India, but the core principles used for telling their stories remain the same. Following in the footsteps of its predecessors, Sui Dhaaga is nothing short of pure unadulterated Indian-made sugar shot into your bloodstream.

Set in Chanderi of Madhya Pradesh, a town on the brink of becoming a city, Sui Dhaaga introduces you to Mauji (Varun Dhawan) and Mamta (Anushka Sharma) - a man and a woman who were married to each other by chance but are on the brink of becoming a couple by choice. Mauji works as a salesman at a store that specialises in selling sewing equipment, and is a man oblivious to his place in the world and his constant ill-treatment at the workplace.

One fateful incident later, Mamta inspires Mauji to quit his demeaning job and start a business of his own. And as fate would have it, many more cinematic incidents occur soon after, and a runtime of just over two hours is filled quite effortlessly.

However, the effortlessness comes as a result of the stellar cast more than due to the storytelling or the filmmaking itself. This is a film of two distinct halves where one half trumps the other on almost every front. The first half of Sui Dhaaga painstakingly constructs a character-based foundation the rest of the film can build itself on. Mamta's and Mauji's relationship of convenience is illustrated via a series of clever directorial and visual choices, and helps the audiences acclimatize themselves to the couple's living conditions with consummate ease. This deft adherence to the craft of storytelling pays off in spades, with a pre-intermission sequence brimming with raw, unadulterated emotion that leaves you wanting more.

One trip to the concession stand later, you find the second half mirroring the soft drink and popcorn you have in your hands. The plot becomes a tad generic. The characters lose their rough edges. And the well-worn theme of the little guy fighting an establishment rears its presentable head on-screen. Once the film lays its product-placement-laden cards on the table, its outcome becomes aggressively predictable; one of the world's largest fabric brands would never let themselves be shown in a shade of grey.

The second half's foray into multiple plot threads with little time being invested on any of them robs it of its emotional appeal, even though it manages a feel-good factor by playing to the crowd. However, this is not to say that the second half has no redeeming qualities. Two specific scenes stand out in a sea of generic storytelling. Mamta's heart-warming monologue about her husband and Mauji's reconciliation with his father show that the movie had more potential than it ultimately ended up using. And even though the film's ideology appears to belong to a time gone by, the story being told and actors bringing the characters in it to life validate these seemingly-archaic themes. Underwritten characters be damned, Dhawan, Sharma, Raghubir Yadav and Yamini Das will not be deterred from doling out stellar performances to save a movie that's losing a battle for originality.

The film's music too is easy on the ears but has little to no staying power. Even though the soundtrack is powered by Varun Grover's handsome wordplay and cutesy choreography, the music blends in with film it is a part of, which in itself has no lofty aims. Sharat Katariya's eye for detail is as evident in his staging of scenes as it is with the aforementioned choreography. The movie's devotion to visual storytelling norms is much appreciated, and the care with which the tailoring scenes are shot make you want to be a gentleman wearing a bespoke suit. However, all the attention to detail in the world can't mask the unmissable sheen of a Yash Raj production. Even though the film is set in a small town, the over-population, dust and harsh living conditions that are should be a part of it are nowhere to be found.

The underlying feeling that the movie is protected by a force field is palpable. Like your popcorn and soft drink, the film spikes your blood sugar level and leaves you feeling happy as long as it stays on your tongue. There is no after-taste or profound meaning attached to it. It is conceived and processed by people in a lab who have perfected the art of getting butts in seats. Even though we claim to crave a healthy diet, we were still sitting in that cinema hall with popcorn in hand, soft drink in mouth and a smile on our lips as the end credits rolled.
Share. Save. Connect.
Tweet
SUI DHAAGA SNAPSHOT 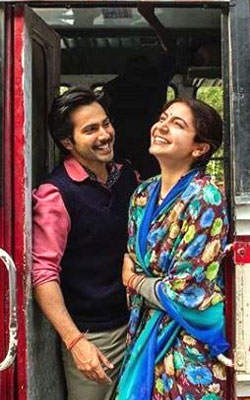 ADVERTISEMENT
This page was tagged for
Sui Dhaaga hindi movie
Sui Dhaaga reviews
release date
Varun Dhawan, Anushka Sharma
theatres list
Follow @fullhyderabad
Follow fullhyd.com on
About Hyderabad
The Hyderabad Community
Improve fullhyd.com
More
Our Other Local Guides
Our other sites
© Copyright 1999-2009 LRR Technologies (Hyderabad), Pvt Ltd. All rights reserved. fullhyd, fullhyderabad, Welcome To The Neighbourhood are trademarks of LRR Technologies (Hyderabad) Pvt Ltd. The textual, graphic, audio and audiovisual material in this site is protected by copyright law. You may not copy, distribute, or use this material except as necessary for your personal, non-commercial use. Any trademarks are the properties of their respective owners. More on Hyderabad, India. Jobs in Hyderabad.