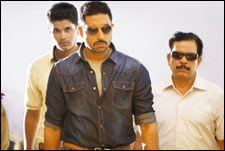 Indeed, it is probably now tough for viewers to see Dum Maro Dum as an entity by itself, without having to place it against the backdrop of what is largely irrelevant marketing. DMD doesn't do the sensational things that the promos have led you to believe it will. Except for the fact that it centres around the drug trade (and that its cops indulge in nasty ways to get their suspects to confess), it is a plain vanilla thriller - one that probably doesn't keep you at the edge of your seat, but that, without doubt, keeps you interested.

Shot through Amit Roy's expert lens, Dum Maro Dum is a glossy, stylish and colourful ride into Goa's crime scene. Goa itself isn't the cinematographer's muse, as much as the faces and moods of the characters, and their immediate settings, are.

ACP Vishnu Kamath (Abhishek Bachchan) is trying to bust Goa's narcotics trade. The drug mafia is lorded over by the sleazy Lorsa Biscuta (Aditya Pancholi), who is beyond law of any kind. When a quivering middle-class college lad Lorry (Prateik Babbar) with "an excellent academic record" gives in to the money involved in the transport of the evil white powder, the crap threatens to hit the ceiling.

Certain filmi short-cuts through the mystery mar an otherwise crisp and engaging narrative. The pre-interval action, specially, is pretty engrossing, and it is also fun to weave through Kamath's thread of the Great Goan Scavenger Hunt, meager though it is.

This is the kind of flick that revels in performances and celebrates the filmi-ness of its high-drama moments (like the wicked "ha ha ha" that the villain usually breaks into in a face-off with the hero). And this is why the writers should have infused a lot more depth into their characters. Instead, what we mostly have is a quick-n-slick slide show of pretty faces and shady Goan hobbies, with each character's individual story flashed in your face just once and not being elaborated much.

Abhishek Bachchan is good, but is given some laughable lines that turn his ACP into somewhat of a joke. And hence, a little bit more of Rana Daggubati would have helped matters greatly. The man's definitely eye-candy, but could have meant so much more to the film, if only he were given some more meat.

Meanwhile, Prateik Babbar is a little contrived. But then, Bipasha is as stunning as ever, and Aditya Pancholi turns out to be an absolute delight.

Pritam's score is good (save for the officially unpopular title remix); it is the snappy background music sets half the tone for the thrills and chases.

This one's for those who don't make a career out of being overly-discerning. And also, for those for whom Rana entering Bollywood is the equivalent of Aishwarya Rai entering Hollywood.
Share. Save. Connect.
Tweet
DUM MARO DUM SNAPSHOT

See Dum Maro Dum full details
DUM MARO DUM USER REVIEWS
1 - 1 OF 1 COMMENTS
POSITIVE  |  NEGATIVE |  NEWEST  |  OLDEST  |  MOST HELPFUL  |  LEAST HELPFUL
USER RATING
7.0
1 USER
Performances
Script
Music/Soundtrack
Visuals
6.0
8.0
4.0
9.0
Can watch again - No
Good for kids - No
Good for dates - No
Wait to rent it - No
Pranay Rupani on 22nd Apr 2011, 3:25pm | Permalink
Rana is definitely eye candy but he cannot seem to act to save his life. Also the fact that he is named Joki in the film, which is hilarious. The film had great promise but all that was glossed over unfortunately.

ADVERTISEMENT
This page was tagged for
Dum Maro Dum hindi movie
Dum Maro Dum reviews
release date
Abhishek Bachchan, Kangana Ranaut
theatres list
Follow @fullhyderabad
Follow fullhyd.com on
About Hyderabad
The Hyderabad Community
Improve fullhyd.com
More
Our Other Local Guides
Our other sites
© Copyright 1999-2009 LRR Technologies (Hyderabad), Pvt Ltd. All rights reserved. fullhyd, fullhyderabad, Welcome To The Neighbourhood are trademarks of LRR Technologies (Hyderabad) Pvt Ltd. The textual, graphic, audio and audiovisual material in this site is protected by copyright law. You may not copy, distribute, or use this material except as necessary for your personal, non-commercial use. Any trademarks are the properties of their respective owners. More on Hyderabad, India. Jobs in Hyderabad.