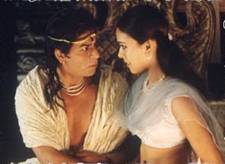 Smriti Kashyap / fullhyd.com
EDITOR RATING
5.0
Performances
Script
Music/Soundtrack
Visuals
NA
NA
NA
NA
Suggestions
Can watch again
NA
Good for kids
NA
Good for dates
NA
Wait to rent it
NA
What happens when you give bubble gum chewing airheads some expensive film, three meters of cloth and a history textbook? Well you get Ashoka - oh no, pardon me all over the place, Asoka!

A film made by scheming warlocks on a moonless night, Asoka seems to have thrown in some fancy-schmancy visual work, midriff baring bimbettes, a hero who seems to be a cross between Rambo and the Planet Of The Apes, and a certain Anu Malik who has a certain penchant for cacophony, all into the same cauldron, and let them simmer gratefully on a low flame. And when the Kalinga war begins to put up a stink, you know that the warlocks will drain SRK as Asoka from out of the cauldron and then hang him on a Buddhist clothesline to drip-dry.

This, my simple-minded friends, is Asoka all simplified and spelt out for you, so that you don't waste a good weekend watching some testosterone driven male going on a killing spree that would put Jack The Ripper to shame.

Asoka was supposed to be the King Khan's dream film. Yeah. And going by the flick, you just begin to worry about his taste if nothing else. Santosh Sivan's flick makes a feeble apology right at the beginning that it doesn't attempt to trace the exact history of Asoka. I'm mighty glad they cleared the air on that one... going by the flick alone I would be led to believe that Hemant Trivedi still had a boutique in 267BC.

The film traces the story of King Asoka (SRK) as he makes his journey through life. Young Asoka (played by Neanderthal man SRK) is moving at mach 5 towards the throne of his kingdom. But there is a bug on the windshield in the form of his evil stepbrother Susiman (Ajit Kumar). Fearing for her son's life, Asoka's mother Dharma tells him to take a hike in to the woods and stay put till danger disappears. So Asoka buzzes off.

SRK's voyeuristic instincts get ample mileage when he sees young white whale Kareena prancing around as usual in her boob tube. He does a couple of flips, and soon Cupid strikes a cacophonous chord. Take a bow, Anu Malik. With this begins a love story of the blue bloods - Kareena is Karubaki, the princess of Magadh, on the run with her little brother Aryan - hello?? - and a Senapati Bheem (Rahul Dev). But neither SRK nor KK knows of each other's lineage.

SRK soon leaves as his mom falls ill and life takes a different turn altogether. And this is also when I think the grass kicked in, as you are subject to stuff you don't want to bother to believe.

Asoka is a tale, like I said, made by bubblegum chewing teenagers, for a strictly angrez audience whose IQs are below the per capita income of Ethiopia. It tries to tell a tale differently and succeeds in a meek manner, but the film doesn't try to give it a smidgen of credibility in the form of language, costumes, music and the like.

SRK dominates totally with some intense teeth baring, gnashing and grating, and that's about it. And why is Kareena spelt in the credits as Karreina? Gosh, it's easier to spell Encyclopaedia Galactica backwards. She does her bit anyways, flashing around the screen. SRK and KK have as much chemistry as pizza and sambar.

If you want to watch the film, you might just want to pay attention to the direction, since Sivan has done a good job with some neat scenes. But apart from that there isn't much to write home about. The whole film is weird, and make sure you've your insurance policy in triplicate before entering the hall. Cheerio and good luck interpreting your slice of history.
Share. Save. Connect.
Tweet
ASOKA SNAPSHOT

ADVERTISEMENT
This page was tagged for
ashoka the hero 1 movie movie
asoka 2001 full hindi movie
hindi movie asoka
the writings of ashokamovie
Ashoka Hindi movie
Follow @fullhyderabad
Follow fullhyd.com on
About Hyderabad
The Hyderabad Community
Improve fullhyd.com
More
Our Other Local Guides
Our other sites
© Copyright 1999-2009 LRR Technologies (Hyderabad), Pvt Ltd. All rights reserved. fullhyd, fullhyderabad, Welcome To The Neighbourhood are trademarks of LRR Technologies (Hyderabad) Pvt Ltd. The textual, graphic, audio and audiovisual material in this site is protected by copyright law. You may not copy, distribute, or use this material except as necessary for your personal, non-commercial use. Any trademarks are the properties of their respective owners. More on Hyderabad, India. Jobs in Hyderabad.