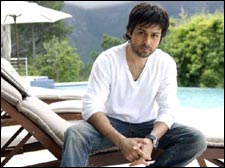 EDITOR RATING
4.0
Performances
Script
Music/Soundtrack
Visuals
6.0
3.0
7.0
8.0
Suggestions
Can watch again
No
Good for kids
Unsure
Good for dates
Yes
Wait to rent it
Yes
Jannat is a pretty lousy movie, but some pretty lousy movies still make you think, and not necessarily only about how some people actually get paid for their scripts. Hidden inside a tale strictly for the indomitably credulous, is a character that makes you muse on how some people are so not scared of the repercussions of crime, and how they simply do not realize that some day it all has to catch up with you.

The problem, you quickly realize if you keep at your thinking, is that crime is almost a synonym for instant gratification, and a desire for instant gratification is at the core of all life, in all its forms. Nobody commits crime to benefit in their next life. So if you're asking yourself why Arjun just isn't seeing the point that some day he will get caught and pay the price, that's good news, since you're thinking long term, which is against basic human nature - if there were no society, man wouldn't think beyond his next meal.

That bleak self-encouragement apart, Jannat has little to offer you. Based on a script that could almost be used for a mythological tale, the film glosses over all the detail that legitimizes a tale of astounding success. Arjun (Emraan Hashmi) is a compulsive gambler who realizes that he has a brilliant knack for betting on cricket matches, and quickly forms his own betting syndicate, earning obscene money in the process.

This catches the eye of the big betting ringleader (Jawed Shaikh), who gets him to shift to South Africa and work for him, and Arjun turns into a match-fixer as well and multiplies profits for his company. However word soon gets out to his ladylove Zoya (Sonal Chouhan) who is living in with him and who is ridiculously honest, and she helps the cops led by Sameer Malhotra (Samir Kochar) get him red-handed.

When he's released from prison, his repentance is driven mostly by his undying love for her, and he aims to turn over a new leaf, but the baddies will of course not let him. As the Don says, there's only incoming in this business, no outgoing.

Jannat is marked by a slick performance by Emraan Hashmi. You can gasp all you want, but in how cool Arjun is, he is almost a role model. What puts you off about the film is the ridiculous skill Arjun has in betting, especially on cricket where essentially anything can happen. And the explanations offered - judgements based on the nature of the pitch, the form of the batsmen etc. - attract more contempt than not even bothering to try.

Given that his core skill - the raison d'etre of the film - is not credible by any measure, there's nothing gripping about the film, despite the fast pace of the first half. There are few great lines, no great performances (the villian is hardly menacing, and Sonal has a long way to go as a performer), and the second half has little life or depth. The music, like with that of most Bhatt camp films, has slow melody to it. And the climax defeats the reason you go to a movie, which is to feel happy.

There isn't much richness in detail about Jannat, and given that it is essentially a romance - cricket is only peripheral - not enough mush either, thanks in good measure to poor writing, but also to a lead actress who cannot command enough screen presence. The movie might do well for a week or so solely since there is no other big Hindi or Telugu release this week, and due to a general lack of good Hindi films around. And no, if you're going in anticipation of any kisses, stay away.
Share. Save. Connect.
Tweet
JANNAT SNAPSHOT

ADVERTISEMENT
This page was tagged for
Jannat hindi movie
Jannat reviews
release date
Emraan Hashmi, Sonal Chauhan
theatres list
Follow @fullhyderabad
Follow fullhyd.com on
About Hyderabad
The Hyderabad Community
Improve fullhyd.com
More
Our Other Local Guides
Our other sites
© Copyright 1999-2009 LRR Technologies (Hyderabad), Pvt Ltd. All rights reserved. fullhyd, fullhyderabad, Welcome To The Neighbourhood are trademarks of LRR Technologies (Hyderabad) Pvt Ltd. The textual, graphic, audio and audiovisual material in this site is protected by copyright law. You may not copy, distribute, or use this material except as necessary for your personal, non-commercial use. Any trademarks are the properties of their respective owners. More on Hyderabad, India. Jobs in Hyderabad.