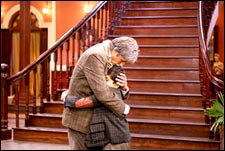 Samrat Sharma / fullhyd.com
EDITOR RATING
5.5
Performances
Script
Music/Soundtrack
Visuals
6.0
5.0
4.0
7.0
Suggestions
Can watch again
No
Good for kids
Yes
Good for dates
No
Wait to rent it
Yes
Never mind the incessant SRK promos, Bhoothnath belongs to Amitabh Bachchan and Aman Siddiqui, the precocious kid you keep seeing in the other promos. Granted, there's not enough buzz with just them, but it would be a mistake to walk into the cinemas with SRK on your expectation list. He is hardly there, and, as it turns out, completely unnecessary.

Bachchan and Siddiqui have strong enough presence and, surprisingly enough in case of the kid, acting chops in spades to carry the film through. Bachchan's Jim Carey-esque performance may not be his best work but is tonally spot-on with the rest of the film, over exaggerating each expression to get the maximum comedy mileage. Siddiqui's presence is surprisingly solid and dependable, and while he may not be a super kid, he is everyday ordinary enough to be relatable.

Vivek Sharma's use of the charisma of the funny old man and the spunky young kid are, while not original, definitely solid enough to get this kid's film off ground with a certain sense of affability and likeability. It's not breaking new ground, and not mind-blowingly funny, but it's decent fun, and half way entertaining, too. Despite a nonexistent plot and barely there chills, the film chugs along merrily for the most part.

It all begins when Papa Sharma (Shahrukh Khan) and Mama Sharma (Juhi Chawla) buy a mansion in Goa, bringing along their percipient boy Banku (Aman Siddiqui). While Papa goes off working on a cruise ship, Mama has her hands full dealing with Banku - mama's boy one moment, mad devil the next. Everyone tells the Sharmas that the mansion is haunted, though they are reluctant to believe it all.

Enter Bhoothnath aka Kailash Nath (Amitabh Bachchan), the ghost haunting the place and verily trying his best to scare Banku. In a cringe-worthy moment, Banku explains to the wizened old ghost that he only believes in angels, and the two strike a chord. The rest of the cast by now is ready to be a part of the sophomore prank-laden tumble that the two leading men take us through.

Herein lies the problem - Vivek Sharma is content making this a by-the-numbers kiddy flick, pouring in the sight gags one after the other, with little to hold them together save the two dudes. Gags are stolen or inspired from various kid-friendly comedies from Hollywood, and the plot comes to a grinding halt while both the dudes make merry.

Like I said, it's mindless fun enough, but has no substance in which to sink its teeth into. This takes us to the second, and by far the biggest problem with the film - the melodrama. A Chopra film not directed by a Chopra doesn't mean it stays away from the heavy-handed moral twists and the wailing melodrama wrapped in silk. In order to add the much-needed meat to the film, Sharma piles up the glycerin and gives us a half-hour of angry gesticulating and maudlin moments between Kailash Nath (when he was alive) and his neglectful son (Priyanshu Chatterjee).

Not only does the tacked-on part come through as the bits with which to pacify the adults, it also smacks of ignorance about what makes a kids' film work for adults. The effusively and insincerely emotional last act is a criminal waste of footage and our time, and serves no purpose other than to make an okay film bad. It is strong enough to leave a strong after-taste, yet no good enough to actually mean something.

The forced and fake melodrama, coupled with the rest of the cast's hammy presence, brings the whole film down like a pack of cards. Really, everyone else is just in to make a quick buck. Rajpal Yadav and Satish Shah I can understand, being given nothing that they haven't done before, but everyone else just delivers what the script demands and backs off.

I wish the cast had that extra joie de vivre that Banku and Bhoothnath share, or that Vivek Sharma had more sense than to make a kids' film with a Chopra film mixed in, or that he had a single original thought anytime during the making of the film. But if wishes were ponies, I'd have a ranch. If your child forces you, go in, and walk out when the flashbacks begin. If he doesn't bother, neither should you.
Share. Save. Connect.
Tweet
BHOOTHNATH SNAPSHOT

See Bhoothnath full details
BHOOTHNATH USER REVIEWS
1 - 3 OF 3 COMMENTS
POSITIVE  |  NEGATIVE |  NEWEST  |  OLDEST  |  MOST HELPFUL  |  LEAST HELPFUL
USER RATING
4.3
4 USERS
Performances
Script
Music/Soundtrack
Visuals
5.5
4.0
5.5
5.3
Can watch again - No
Good for kids - Yes
Good for dates - No
Wait to rent it - No
Krishna on 19th May 2008, 10:46am | Permalink
The movie starts off with a lot of promise. The bhooth-kiddo scenes really steal the thunder in the 1st half. Alas, that's as good as it gets. 2nd half is downhill all the way. All-in-all, watch it once if you have nothing better to do but otherwise it's definitely not a must-see.

RATING
3
Mithu Sadarangani on 16th May 2008, 12:03am | Permalink
The reason for the Bhooth to haunt the house was not appropriate. Normally the ghosts trouble the people who have caused pain to them............and not children. Also no reason to have such a big house closed and only available for outsiders!
RATING
3
Aishwarya Mantha on 10th May 2008, 9:36pm | Permalink
Why did the reviewer forget to mention SRK and Juhi.

I went to watch the movie for Juhi and she looks so beautiful and is such a delight to watch. Starts off a little uncomfortable, but its all giggles after that.

SRK is damn irritating. OMG so much over action. So what he comes in during the second half (also read as bad part) of the movie, he makes it even worse with his acting.

Rajpal yadav is funny. All his scenes are hilarious.

Music is good but you get a feeling kaheen se chori hua hai...and yeah AB and Juhi have sung a song in this movie. Its very cute.

So.. don't watch this movie.. Tell you what, let me list the movies I found better than this one, and you can decide...

ADVERTISEMENT
This page was tagged for
Bhoothnath hindi movie
Bhoothnath reviews
release date
Amitabh Bachchan, Juhi Chawla
theatres list
Follow @fullhyderabad
Follow fullhyd.com on
About Hyderabad
The Hyderabad Community
Improve fullhyd.com
More
Our Other Local Guides
Our other sites
© Copyright 1999-2009 LRR Technologies (Hyderabad), Pvt Ltd. All rights reserved. fullhyd, fullhyderabad, Welcome To The Neighbourhood are trademarks of LRR Technologies (Hyderabad) Pvt Ltd. The textual, graphic, audio and audiovisual material in this site is protected by copyright law. You may not copy, distribute, or use this material except as necessary for your personal, non-commercial use. Any trademarks are the properties of their respective owners. More on Hyderabad, India. Jobs in Hyderabad.