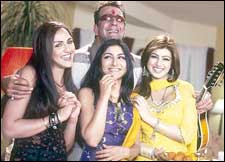 A David Dhawan flick means a madhouse plot, rip-roaring dialogues, hilarious misunderstandings, impossible plot twists, an outrageous climax and songs with suicidal lyrics (e. g. “Hello Madam, I am your Adam”). And Shaadi No. 1 starts off according to the syllabus – with a ridiculous plot. Only, after that it slowly goes downhill. Save for some sporadic moments of fun in the first half, there’s very little of the ingenious stupidity of David Dhawan staple, and the second half actually makes you wish you had a remote.

The film starts with Raj (Fardeen Khan), Veeru (Zayed Khan) and Aryan (Sharman Joshi), 3 husbands, about to commit suicide since their wives are not giving them enough sex: religious Bhavna (Ayesha Takia) is constantly on vows of chastity, Diya (Esha Deol) is too busy with her attempts to become an actress, and Sonia (Soha Ali Khan) is constantly preoccupied with work as a lawyer.

Now as anyone successful will tell you, the first rule of committing suicide is not to get distracted, but just concentrate and finish the job before thinking of anything else. However, these 3 look around, and find an industrialist Kothari (Satish Shah) also trying to commit suicide. They save him, and he gives them high-paying jobs in his company. But remember that this is just a movie, so you should continue to prepare résumés and email them to get good jobs.

A few days later the trio want to renegotiate their salaries with Kothari and go to meet him, but find him attempting suicide again. This gives them hope and they save him again, but this time he tells them that his 3 daughters want love-marriages, while he prefers arranged marriages for them, and so he wants the 3 guys to fall in love with his girls and then break their hearts, so that the girls will forever swear off love.

The guys agree since Kothari puts their jobs on the line, but the moment they see the girls, all compunction dissolves. They merrily start romancing them, and refuse to dump them when Kothari tells them to. Which is why we at fullhyd.com always say that you should be very careful about who you are selecting to break your daughter’s heart.

The guys obviously need to two-time both their wives and their new girlfriends, and to throw a spanner in the works, in comes Lucky (Sunjay Dutt, in the most poorly-scripted and enacted role of his career). Who he is, where he comes from, how he lands in their homes, what he does and why he is in the movie is unclear to everyone, but he eats up good footage without the slightest trace of guilt.

The films hems and haws to its end, with nothing to show for it. It doesn’t even have the David Dhawan nothing in it, like we said. Sunjay Dutt is the biggest liability – neither a role nor an inclination. The rest of the film is mostly skin show. Soha Ali Khan doesn't yet show the kind of acting talent that runs in the family, and looks so much like Saif Ali Khan, you get embarrassed everytime Sharman Joshi tries to romance her. The songs are typical of the David Dhawan factory.

On the whole, this one is so totally worth a miss, it’s not a joke.
Share. Save. Connect.
Tweet
SHAADI NO. 1 SNAPSHOT

ADVERTISEMENT
This page was tagged for
Shaadi No. 1 hindi movie
Shaadi No. 1 reviews
release date
Sanjay Dutt, Fardeen Khan
theatres list
Follow @fullhyderabad
Follow fullhyd.com on
About Hyderabad
The Hyderabad Community
Improve fullhyd.com
More
Our Other Local Guides
Our other sites
© Copyright 1999-2009 LRR Technologies (Hyderabad), Pvt Ltd. All rights reserved. fullhyd, fullhyderabad, Welcome To The Neighbourhood are trademarks of LRR Technologies (Hyderabad) Pvt Ltd. The textual, graphic, audio and audiovisual material in this site is protected by copyright law. You may not copy, distribute, or use this material except as necessary for your personal, non-commercial use. Any trademarks are the properties of their respective owners. More on Hyderabad, India. Jobs in Hyderabad.