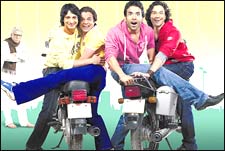 Ravi Mundoli / fullhyd.com
EDITOR RATING
5.0
Performances
Script
Music/Soundtrack
Visuals
NA
NA
NA
NA
Suggestions
Can watch again
NA
Good for kids
NA
Good for dates
NA
Wait for OTT
NA
What is this, the 17-year-itch? Way back in 1990, when boys were boys and men were men, and Pluto was still a planet, the Malayalam director duo of Siddique-Lal came out with In Harihar Nagar. It turned out to be a huge hit, and as any self-respecting, coconut oil guzzling Mallu (including this reviewer) will tell you, is a veritable classic of the comedy genre.

In 1991, In Harihar Nagar was remade in Telugu as Madhuranagarilo, and that too was a hit. It is reasonable to speculate that the movie has avatars in Tamil, Kannada, Bhojpuri, Klingon and other classical languages also.

The Wheel of Time trundled on, and much that was once known was lost; history became myth and myth became legend and all that Tolkien-ish jazz. Until one day in 2007, quietly hoping that no one would notice, Priyadarshan made a faithful copy of the original and turned it loose on unsuspecting public.

Dhol is about 4 no-good friends (Joshi, Kapoor, Khemu, Yadav) and their bumbling attempts to woo the sexy and very wealthy padosan (Dutta) who has moved into town to find out why her the death of her brother (Khan) doesn't quite seem kosher. The Famous Four pretend to be buddies of deceased bhaiyya, and worm their way into the lady's arms.

Meanwhile, looming darkishly in the background is the figure of Zicomo (we kid you not), who is some kind of underworld kingpin. Nincompoop, sorry Zicomo, is in search of the eponymous dhol, which actually does not even make an appearance till the last scene.

Dhol is a product of the well-known Checklist Idiom of remaking movies. The principal directorial tool here is a checklist which contains the best scenes from the original movie, and which you basically re-shoot, making nice tick marks on the list as you go through it.

The "heroes" serenade the "heroine" with a song (Ekantha Chandrike, Madhura Nagarilo) in the original? Let's throw in Bheega Aasmaan. Check! There's a certain line that the Four use when they have to take to their heels? Let's shove in a Hindi clone. Check! And so on...

For all its faults, Dhol isn't entirely unwatchable. The faithfulness to the originals is likely its saving grace. The movie motors along levelly for much of the time like an ECG attached to a corpse. But there are occasional spurts of activity that add some peaks to the flatline (so the corpse is actually Frankenstein's monster's, ha ha).

Kapoor and Khemu vary from bearable to adequate, while Joshi has his moments. Yadav with his slapstick portrayal of a rustic, mama-pecked bhanja has all the opportunity in the world to churn out laugh after laugh, and does a decent job. Watch out for the tons of Hindi proverbs and metaphors that he peppers his lines with.

Watch out also for some insidious PJs - we're not sure we even caught all of them. For instance, a shot of the Four walking past a barber's as one of them shouts "Nahin, nahin, nahin" and makes it sound like "naai naai naai". Ouch!

Dutta and Rohatgi don't have much to do beyond looking alternately sad and perplexed, and in an innovative cinematic move actually get through the entire movie without showing any skin! Well, not literally (after all it is Tanushree Dutta and Payal Rohatgi), but compared to previous outings, they might've been playing nuns in this one.

Om Puri brings his hallmark classiness and finely honed histrionic abilities in what is a moving and powerful portrayal of an old man who on the one hand is confronted by the existential angst of the Postmodernism that threatens to subsume his grand-daughter, and on the other is in the Kafkaesque position of the Promethean Man. Err...not. Puri has virtually nothing to do other than help us write that gobbledygook paragraph, and probably did the movie for the money.

Pritham's music is passable, just like just about everything else about Dhol.

Dhol is not as funny as Dhamaal, but it's not Marigold either, so now you know where it lies in the spectrum. No need to kill yourself trying to get tickets for this one, but if someone gifts you the tickets, there's no reason to turn them down either.
Share. Save. Connect.
Tweet
DHOL SNAPSHOT

ADVERTISEMENT
This page was tagged for
Dhol hindi movie
Dhol reviews
release date
Sharman Joshi, Tusshar Kapoor
theatres list
Follow @fullhyderabad
Follow fullhyd.com on
About Hyderabad
The Hyderabad Community
Improve fullhyd.com
More
Our Other Local Guides
Our other sites
© Copyright 1999-2009 LRR Technologies (Hyderabad), Pvt Ltd. All rights reserved. fullhyd, fullhyderabad, Welcome To The Neighbourhood are trademarks of LRR Technologies (Hyderabad) Pvt Ltd. The textual, graphic, audio and audiovisual material in this site is protected by copyright law. You may not copy, distribute, or use this material except as necessary for your personal, non-commercial use. Any trademarks are the properties of their respective owners. More on Hyderabad, India. Jobs in Hyderabad.