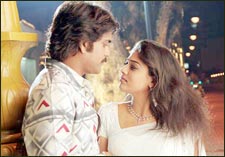 EDITOR RATING
6.0
Performances
Script
Music/Soundtrack
Visuals
NA
NA
NA
NA
Suggestions
Can watch again
NA
Good for kids
NA
Good for dates
NA
Wait for OTT
NA
In many ways, Boss is what you go to a movie for – it takes you away from the real world, and into what you believed it was like before you grew up. The people are all good-looking, there’s more than enough money for all the good things in life, love succeeds in the end, God helps when there is serious trouble (and upon just gazing at an idol of His, we may add), hard work and honesty are rewarded, the bad guys get punished in the end… you know, the works.

Plus, there’s Nayantara in those compelling saris.

Boss is primarily gloss and chic and feel-good, and if you start looking for logic, you are getting your priorities mixed up. Gopal Krishna (Nagarjuna) is an honest real estate entrepreneur in Hyderabad who’s made it big really fast. If you can believe it is possible for someone to even do business in real estate in Hyderabad by being honest, leave alone becoming big really fast (try getting a speck of dust to move in HUDA or MCH without paying someone for it), then you will really enjoy this film, for it requires that credulity all through.

GK, as Gopal Krishna is called, works from an extremely lavish and swanky office – a multi-storeyed building with about 50,000 sq. ft. – even if he has about 15 employees in all. One night he runs into Anuradha (Nayantara), who asks his help in taking someone injured in an accident, to a hospital. Anuradha is a poor girl who grew up and is living in an orphanage, and is looking for a job, but has enough money to be wearing make-up in the middle of the night.

He is impressed, and gives her a job as his personal secretary, offering Rs. 50,000 a month, a car and an apartment (we’re sure there were profit-sharing and stock option clauses as well, and that we just weren’t paying attention). She starts doing a stellar job for him, and soon falls in love with him.

No normal unattached male would be able to resist such a combination of talent and pulchritude for more than, oh, 15 seconds, but GK is purely a shrewd businessman who treats employees as resources. And if you can believe that someone as smart as him never realized that she was going soft on him, then yes, you are in the right frame of mind to enjoy this one.

One day Anuradha stages a protest to help someone abused by a police officer, during her office time. GK gets very upset and castigates her in front of the entire office. She promptly resigns despite being so in love, and starts out on the last 1 month – the notice period in her contract. She tells GK that she will continue after that only if he himself requests her to stay back since she is irreplaceable, and he tells her he will ask her to continue only if she herself says she wants to.

GK issues an ad for a secretary promptly, and much to Anu’s disappointment, another pretty girl, Shruthi (Poonam Bajwa), gets selected. And gets Anu insecure with her romantic interest in the good-looking boss as well.

It would be a spoiler to let any more of the story out, but no, this is no love triangle, so no one is a victim of unrequited love. The second half is more involving that the first half, even if paradoxically it seems to go on and on.

The success of a romance depends primarily on how much detail there is in the sketching of the courtship and the times spent together, and how nostalgic you feel for them when the couple gets estranged. Measured that way, Boss is not really top of the heap on scripting. In theme, it is similar to Manmadhudu – except that Manmadhudu had more fine print and more comedy.

The performances are what you expect, and the music is unremarkable. The first half is rather slow, and the second half appears to have ended at a stage when it starts all over again. A big reason to watch Boss, however, is its leading lady – for the men at least, Nayantara can be the raison d’etre of the film, rising above even the star value of Nagarjuna. It is like Shriya in Sadaa Mee Sevalo – clad gorgeously in saris all through, she can define your vision for a beautiful woman.

Add the star power of Nagarjuna, plenty of shimmer and sheen, the usual appeal of scripts where the lead pair breaks up and has to get back together again, and no great Telugu film since Bommarillu nearly 2 months back, and Boss becomes a recommended watch if you are looking for an easy, good-looking film.
Share. Save. Connect.
Tweet
BOSS SNAPSHOT

ADVERTISEMENT
This page was tagged for
Nagarjuna boss movie review
boss full movi in telgu
Bewaarsu na song
Boss telugu movie
Boss reviews
Follow @fullhyderabad
Follow fullhyd.com on
About Hyderabad
The Hyderabad Community
Improve fullhyd.com
More
Our Other Local Guides
Our other sites
© Copyright 1999-2009 LRR Technologies (Hyderabad), Pvt Ltd. All rights reserved. fullhyd, fullhyderabad, Welcome To The Neighbourhood are trademarks of LRR Technologies (Hyderabad) Pvt Ltd. The textual, graphic, audio and audiovisual material in this site is protected by copyright law. You may not copy, distribute, or use this material except as necessary for your personal, non-commercial use. Any trademarks are the properties of their respective owners. More on Hyderabad, India. Jobs in Hyderabad.