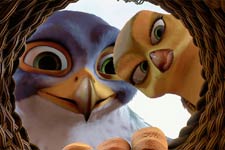 Nupur Barua / fullhyd.com
EDITOR RATING
5.0
Performances
Script
Music/Soundtrack
Visuals
5.0
5.0
4.0
6.0
Suggestions
Can watch again
No
Good for kids
Yes
Good for dates
Yes
Wait for OTT
Yes
Pixar, Dreamworks and their ilk have spoilt animation for us. We just cannot help but find fault with newcomers on the animation block, and unfortunately for the South African Triggerfish Animation Studios, their debut film, Zambezia, fails to impress.

Not that the story is a bad one. Kai (Jeremy Suarez) is a Peregrine Falcon, who is now grown up enough to question who he is and what he is destined for. His overly protective father, Tendai (Samuel L. Jackson), does not allow him to explore the area beyond their habitat, the far-flung Katungu.

Kai knows that there is more to the world than flying around this dull area. And when Gogo the Stork (Jennifer Lewis) and Tini the Weaver (Tania Gunadi) crash-land in his territory, he learns that there is a place far away that is a paradise for all birds.

This bird city, Zambezia, is actually located in a gigantic Baobab tree on the edge of the powerful Victoria Falls. Kai wants to go there to join the Hurricanes, an army of the best fliers. Tendai throws a fit.

Even worse, Tendai has known about Zambezia all along, and has even been a resident there. Feeling betrayed, Kai rebels and flies off in search of the fabled city.

Once there, Kai finds himself in the midst of a celebration - it is, after all, the Spring Festival. As he tries to make a place for himself in this new world, he meets Zoe the Black Shouldered Kite (Abigail Breslin), whose foster father Sekhuru (Leonard Nimoy) is the founder and chief of the settlement.

In the meantime, unknown to the distracted birds, former residents and scavengers, the Marabou Storks, have joined hands with the egg-eating Leguaan, Budzo (Jim Cummings), to take control of the city.

Predictably, Kai will be the saviour, despite his initial bumbling and the disapproval of the elders. He will learn to take responsibility, and thus redeem himself with his father and with the rest of the bird population, by following his heart and fulfilling his destiny - but not before he has oodles of fun, or before he forges new relationships, or bungles up everything.

The story works on various levels, but mostly on the presumption that all animation features should follow a confused underdog on his journey to becoming a superhero. This formula has been a hit in countless movies over the decades, so one cannot blame Triggerfish for sticking to the straight and narrow, or to the tried and tested.

The only place Zambezia could have made a mark is in the dialogue department - the conversations could have been more contemporary - but since the makers decided to rehash lines that have been spoken by all characters that ever existed in the animation world, the desired freshness falls flat on its face.

The animation is another area that could have made Zambezia a force to contend with. Unfortunately, the 3D only enhances the mediocrity of the computer graphics. This movie may be a low budget one, compared to the ones that Pixar makes, but comparisons will be inevitable, and the final product lacks the finesse that we are now used to.

The characters are almost two-dimensional, and that is disastrous in a 3D film. Plus, they are all "cute", taking away the point of comparison between the good guys and the bad guys. Features of the birds are vague, and although they are labelled as falcons, kites and so on, they are not easily identifiable. The colour palette is rather monotonous, and the cinematography is lazy.

The actors voicing the characters fare no better. They lack the spirit of animation, literally, making the dialogues seem rather forced and unenthusiastic. Jeremy Suarez and Abigail Breslin, as the leads, falter in emoting their lines, and some of the others sound either too shrill or too bored. The inconsistency in their accents does not help either.

Zambezia is a film for children, then. The 3D may excite them, and the few humorous scenes may evoke some chuckles. The movie can be avoided altogether, unless you have to escort a whole bunch of kids to a movie - there is nothing else this weekend that they can watch, and kiddie movies are a rarity anyway. The predictability may kill the excitement, but the "awww" factor is worth one viewing, for the kids.
Share. Save. Connect.
Tweet
ZAMBEZIA (3D) SNAPSHOT 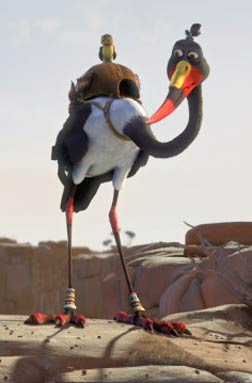 ADVERTISEMENT
This page was tagged for
zambezia 3d blu-ray review
Zambezia (3D) english movie
Zambezia (3D) reviews
release date
Jeremy Suarez, Samuel L. Jackson
Follow @fullhyderabad
Follow fullhyd.com on
About Hyderabad
The Hyderabad Community
Improve fullhyd.com
More
Our Other Local Guides
Our other sites
© Copyright 1999-2009 LRR Technologies (Hyderabad), Pvt Ltd. All rights reserved. fullhyd, fullhyderabad, Welcome To The Neighbourhood are trademarks of LRR Technologies (Hyderabad) Pvt Ltd. The textual, graphic, audio and audiovisual material in this site is protected by copyright law. You may not copy, distribute, or use this material except as necessary for your personal, non-commercial use. Any trademarks are the properties of their respective owners. More on Hyderabad, India. Jobs in Hyderabad.