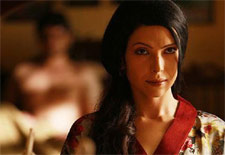 Nupur Barua / fullhyd.com
EDITOR RATING
7.0
Performances
Script
Music/Soundtrack
Visuals
6.0
7.0
6.0
8.0
Suggestions
Can watch again
Yes
Good for kids
No
Good for dates
Yes
Wait to rent it
No
Just a week after the much talked about Nasha comes another controversial (read: having a hint of sex) film that centres on an older woman and a younger man. Since the female lead is viewed as a serious actor, B. A. Pass and "pornography" do not belong in a sentence together, but fact remains that there is a lot more heaving and panting in it than in the afore-mentioned Nasha. Also, B. A. Pass has done the festival rounds, and has already won a huge round of applause, making it a "respectable" film.

Based on a short story named The Railway Aunty by Mohan Sikka, the movie begins with a double tragedy. Mukesh (Shadab Kamal) has lost his parents, and he has two younger sisters who need to be looked after. Mukesh moves to New Delhi to live with his paternal aunt (Geeta Sharma) and her family, a transition that his young cousin resents. His sisters stay back in the small town with their aging grandfather.

Mukesh does not have the will or the required marks to enroll in a fancy course, so he opts for the more generic B. A. Pass. His aunt makes him run errands, and also makes him earn his keep by imposing all the housework on him.

One day, Sarika (Shilpa Shukla), whose husband (Rajesh Sharma) is Mukesh's uncle's boss, calls him home to help out with some crates of apples, and before he knows what hit him, she strips to her underwear and seduces him. Soon, a roaring affair begins, and then, she becomes his pimp. But he learns that there are no free lunches.

Trapped in a vortex of sin and greed, Mukesh has no option but to sink deeper into the complex world that is now thrust on him. He cannot escape. Even as he moves from being vulnerable to becoming absolutely powerless to stop the destruction of his world, Mukesh finds himself taking steps to regain his sanity.

To give Ajay Bahl credit, he has captured the essence of the short story, and written a screenplay that does not drag on and on. The movie is just under 90 minutes, so that makes viewing that much easier, since it is not an easy movie to watch.

Shot in a style that can only be termed noir, B. A. Pass takes you through the crowded lanes of Paharganj into the homes of the rich and famous. It tells you that with wealth comes corruption and cruelty. The small-town boy survives, stoically almost, the cold-hearted manner in which he is passed around like a toy.

Emotions are non-existent, and power games are the only expressions of passion in the bureaucratic society in New Delhi. The story is a reflection of the underbelly of the educated society in a big city, and Sarika's cold-hearted actions leave you gasping.

The sex scenes between Mukesh and her are almost brutal, and give you an insight into how innocence is corrupted. There is no romance, nor softness. Even if Mukesh was in awe of the older woman once, he quickly learns there is no point in pursuing emotions.

The dialogues are straight and precise. The last 20 minutes or so of the movie become predictable, but that is forgivable, given that your attention does not waver. The only glitch is the close-up of the feet during a lovemaking scene, just before intermission. It is almost as if the director ran out of ideas for a gripping mid-point.

Shilpa Shukla, with her unsmiling face, is fabulous as Sarika. She comes across as a mean, self-centred woman, almost sadistic in extracting her pleasures. Rajesh Sharma as her hot-headed, influential husband does justice to the role. He is cunning, but he is also made a fool of. The dichotomy of his character comes across with the dialogues and the expressions.

Shadab Kamal is unrefined as an actor. He has a long way to go to be able to portray the intensity required in the character he plays. He gives it his best shot, though, and is almost convincing. There are times when he hams, but the character demands a little superficiality.

Geeta Sharma as his makes an impact. And Dibyendu Bhattacharya is suitably slimy, friendly and intimidating, all at once.

Ajay Bahl does not allow self-indulgence to creep into this movie, and so every frame is a work of art, unintentionally. The neon lights and shady characters combine to make his screenplay come alive. The cinematography is subtle and sublime. Production and costume designs are perfect.

The biggest flaw in the film is the predictability of the script. The lack of surprises may disappoint a few who want to be shocked and scandalised. The sleaze is concentrated on situations, not the lovemaking scenes. Definitely worth one watch, B. A. Pass is a movie that will revolutionise the way Indian cinema tells stories.
Share. Save. Connect.
Tweet
BA PASS SNAPSHOT 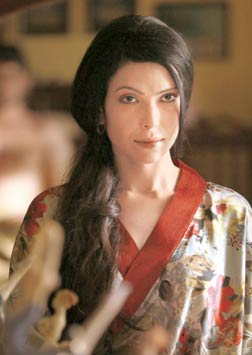 ADVERTISEMENT
This page was tagged for
BA Pass hindi movie
BA Pass reviews
release date
Shilpa Shukla, Rajesh Sharma
theatres list
Follow @fullhyderabad
Follow fullhyd.com on
About Hyderabad
The Hyderabad Community
Improve fullhyd.com
More
Our Other Local Guides
Our other sites
© Copyright 1999-2009 LRR Technologies (Hyderabad), Pvt Ltd. All rights reserved. fullhyd, fullhyderabad, Welcome To The Neighbourhood are trademarks of LRR Technologies (Hyderabad) Pvt Ltd. The textual, graphic, audio and audiovisual material in this site is protected by copyright law. You may not copy, distribute, or use this material except as necessary for your personal, non-commercial use. Any trademarks are the properties of their respective owners. More on Hyderabad, India. Jobs in Hyderabad.