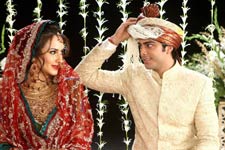 Nupur Barua / fullhyd.com
EDITOR RATING
4.0
Performances
Script
Music/Soundtrack
Visuals
5.0
4.0
5.0
6.0
Suggestions
Can watch again
No
Good for kids
No
Good for dates
Yes
Wait for OTT
No
We Hindi film buffs are no strangers to the concept of sex comedies. Unfortunately, the ones that we have been bombarded with have been more about slapstick and double meanings than actual (tasteful) humour, and there is no reason why Rabba Main Kya Karoon should be any different. Of course, one wishes for a polished, funny, well-written movie that deals with infidelity and betrayal, but then, we can always turn to foreign language films for that. As far as Indian movies are concerned, we are stuck with inanity and stereotypes.

Now, the story. A farmhouse in New Delhi is all set for a grand Punjabi wedding. Saahil (Akash Chopra) and Sneha (Tahira Kochchar) are childhood sweethearts, and cannot wait to get married. Given that all the family members are gung-ho about the event, things should run smoothly from here on, right? Wrong.

Shravan (Arshad Warsi), Saahil's older cousin, walks in to create the mayhem that eventually leads to much confusion. You see, Shravan believes that all men are dogs, with hormones that control them. According to him, they are at the mercy of their penises, and have to bow down to the lust that is rampant in normal males.

And then Rabba Main Kya Karoon becomes predictable fare, with Saahil trying to remain faithful to his to-be bride and Shravan trying to get his young cousin laid.

Add to this three sleazy uncles (Tinnu Anand, Paresh Rawal, Shakti Kapoor), one of whose sanity depends on locating a lost bra; their clueless wives; Shravan's patient spouse (Riya Sen); and plenty of booze and dancing - and you get a chaotic two hours that give you a headache, and a resolution to never attend a wedding again.

The script inserts lame gags and random songs that intensify your above-mentioned headache. The screenplay is determined to prove that all women are stupid enough to concentrate more on their make-up and wifely/motherly/girly duties than on their relationships. It is so easy to dupe them, as Shravan proves.

Also, infidelity is apparently cool - Shravan has his various theories on how and why men must sleep around (otherwise they are not men).

The entire movie moves from one escapade to another, interspersed with wisdom for the young Saahil, who begins to see the point in his cousin's verbal diarrhoea. To balance out the morality issues, there are the older relatives who also have their take on culture and modernisation.

Akash Chopra and Tahira Kochchar could have done with better debuts. They are not allowed to showcase their talents in this movie, and come across as rather stiff and awkward. While Akash Chopra redeems himself by showing confidence (which may be because it is his own brother directing him), Tahira Kochchar barely gets enough screen time to make a mark.

Tinnu Anand, Shakti Kapoor (in an orange wig!) and Paresh Rawal try to keep the spirit alive by portraying authentic versions of creepy uncles. Paresh Rawal does not look too comfortable, though.

Sushmita Mukherjee and Anuradha Patel are wasted. Raj Babbar is scary. And Riya Sen is of no consequence whatsoever, despite the fact that she is finally not playing a sex symbol.

Arshad Warsi clearly rules the movie. His comic timing is impeccable, and his dialogue delivery is flawless. However, his character, though not negative, is not likeable at all, and may lose the actor some die-hard fans. He irritates and grates on your nerves, as his character should. It has been a while since he has moved away from the loveable roles that he revels in.

The songs are average, but "Dua" is a better song than the rest. Sung by Akash Chopra himself, it has already garnered its own fan following. The production and costume designs follow the age-old rule - if it is Punjabi culture that one is portraying on the screen, everything must be larger than life.

The cinematography is decent, but some of the special effects are a little clumsy. The editing, however, is crisp. This is a movie that could have gone on forever, but director Amrit Sagar Chopra definitely knows the art of storytelling - one just wishes that he had picked a better subject.

Rabba Main Kya Karoon has been promoted as a movie that you can watch with your family, but unless you want your young sons to believe that all women are easily available, we suggest you watch this without your kids. It may be a lesson in what not to do as a married man, and what your wife should be careful of. Some of the scenes are enjoyable as independent units, and watching the movie without taking it too seriously may be a good way to spend your weekend.
Share. Save. Connect.
Tweet
RABBA MAIN KYA KAROON SNAPSHOT 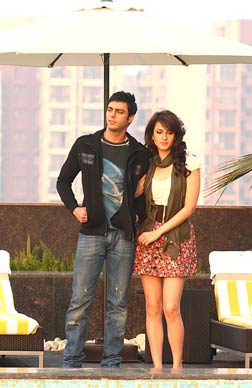 ADVERTISEMENT
This page was tagged for
Rabba Main Kya Karoon hindi movie
Rabba Main Kya Karoon reviews
release date
Akash Chopra, Tahira Kochchar
theatres list
Follow @fullhyderabad
Follow fullhyd.com on
About Hyderabad
The Hyderabad Community
Improve fullhyd.com
More
Our Other Local Guides
Our other sites
© Copyright 1999-2009 LRR Technologies (Hyderabad), Pvt Ltd. All rights reserved. fullhyd, fullhyderabad, Welcome To The Neighbourhood are trademarks of LRR Technologies (Hyderabad) Pvt Ltd. The textual, graphic, audio and audiovisual material in this site is protected by copyright law. You may not copy, distribute, or use this material except as necessary for your personal, non-commercial use. Any trademarks are the properties of their respective owners. More on Hyderabad, India. Jobs in Hyderabad.