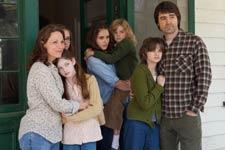 Swayamsrestha Kar / fullhyd.com
EDITOR RATING
7.0
Performances
Script
Music/Soundtrack
Visuals
6.0
7.0
8.0
7.0
Suggestions
Can watch again
Yes
Good for kids
No
Good for dates
Yes
Wait for OTT
No
Remember that time when you turned around suddenly, and caught your reflection in the mirror? Normal people experience a moment of heart-stopping terror at such times. And this is the kind of people that The Conjuring aims at entertaining (read "give mini-heart-attacks to"). The rest of the audience spends the time looking for and successfully pointing out the tropes that are replete in this evil-witch-meets-scary-looking-doll-and-they-both-scare-people-happiy-ever-after venture.

The stage has been set. Ed Warren (Patrick Wilson) and Lorraine Warren (Vera Farmiga) are a husband-wife duo who romance each other over exorcisms and while battling out particularly vicious demonic possessions (a la The Mummy movies, minus the mummies and the reckless infectious fun). Lorraine also has a special gift whereby she can "see" ghosts / dark presences... *coughGhost Whisperercough*. They have a room full of artefacts from their ghostly exploits, and they have the errm... female version of Chucky locked up in a glass case.

Meanwhile, the Perron family has just moved into a house. Before you can say Amityville Horror or even The Shining, the youngest girl has an "invisible" friend, one of the other five is night-walking into cupboards, and the mother is getting bruises on her body.

Also, there are disturbances in the cellar, because duh, the ghosts need a venue for their kitty parties, and like, all the other rooms are already taken. Add to that, a creepy music box, and you've got a masterclass in selective inspiration (notice how we refrain from using the word "copying").

When the supernatural occurrences become a little too much, the Perrons approach the Warrens, and invite them over for some tea, and some good ol' exorcising (the presence of dead people all around apparently acts as an ideal socialising stimulant).

Don't get us wrong. The movie is deliciously scary at places. The kids are awesome, and have the kind of cherubic faces that you typically associate with a haunting (remember Rachel Hurd-Wood in An American Haunting?). And director James Wan blends in hand-held camera footage with lens flares to create a believable ambience in the movie, which works awesomely when the odd door shuts suddenly or the random whisper drifts in through the window.

The background noises are great at places, especially those where they are completely absent, and you can physically feel a dense silence building up, until the climax is revealed to be... nothing. You sigh in relief, your bunched-up muscles relax, and bam! There it is, the overdue scare, the corpse hanging in the background, the wretched face on the wall.

Wan, who knows not to mess with a winning formula, keeps the mood understated and the atmosphere decidedly eerie, yet mundane. It's a difficult thing to achieve, but the director has had plenty of practice with Insidious.

Of the actors, Vera Farmiga is the most memorable as the troubled, almost-ethereal-looking Lorraine. Patrick Wilson (who had earlier starred in Insidious) proves yet again that you can go through an entire movie looking perplexed and bored.

The movie's soundtrack is worth mentioning. "In The Room Where You Sleep" by the band Deadman's Bones is such a wonderful nod to the 60s psychedelic tunes, while the Zombies' "The Time Of The Season" sets the tone quite nicely in the beginning, when the Perrons' domestic set-up is being fleshed out.

The movie, though based on real people and real incidents, borrows heavily from better movies in order to create the few moments of gut-wrenching horror (and yes, there are enough of these to scare the weak of heart). There's a little bit of Hitchcock's "The Birds", as well as smatterings of The Exorcist. Then, there are moments that remind you of the director's earlier venture. But somehow, at a level, this potpourri just works.

The Conjuring is running to almost-full houses, so do watch it for the occasional chill. And yeah, you might find yourself avoiding looking at the corners behind doors for sometime after you have watched it.
Share. Save. Connect.
Tweet
THE CONJURING SNAPSHOT 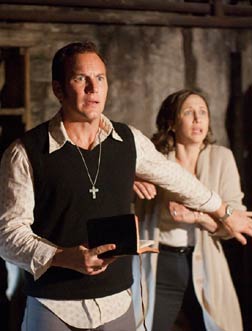 ADVERTISEMENT
This page was tagged for
The Conjuring english movie
The Conjuring reviews
release date
Vera Farmiga, Patrick Wilson
theatres list
Follow @fullhyderabad
Follow fullhyd.com on
About Hyderabad
The Hyderabad Community
Improve fullhyd.com
More
Our Other Local Guides
Our other sites
© Copyright 1999-2009 LRR Technologies (Hyderabad), Pvt Ltd. All rights reserved. fullhyd, fullhyderabad, Welcome To The Neighbourhood are trademarks of LRR Technologies (Hyderabad) Pvt Ltd. The textual, graphic, audio and audiovisual material in this site is protected by copyright law. You may not copy, distribute, or use this material except as necessary for your personal, non-commercial use. Any trademarks are the properties of their respective owners. More on Hyderabad, India. Jobs in Hyderabad.