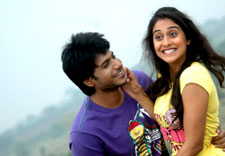 Kritika Deval / fullhyd.com
EDITOR RATING
7.0
Performances
Script
Music/Soundtrack
Visuals
7.0
8.0
7.0
7.0
Suggestions
Can watch again
Yes
Good for kids
Yes
Good for dates
Yes
Wait to rent it
No
Take a deep, deep breath of fresh air, for that is exactly what Routine Love Story is in the testosterone-saturated world of Tollywood. And, finally, you have "youth" entertainers that actually are meant for the youth, and reflect the current ethos. Routine Love Story is exactly what it says it is - a run-of-the-mill love story of the kind you've probably lived through, or have seen friends go through.

So, how is it different? Because in the Telugu movie industry, a routine love story usually involves a bimbette in tiny clothes, a super-chauvinistic hero, bizarre deaths, and sadistic villains. This movie has none of those things, and it works!

Sanju (Sundeep Kishan) and Tanvi (Regina Cassandra) are first-year students at an engineering college. Sanju takes one look at Tanvi, and falls headlong in love, hook, line, and sinker. However, he does have his reservations about making a move, and is content with admiring her from afar. This is where his friends step in, and conspire up an introduction.

Tanvi, on the other hand, is an ingenue with an attitude who thinks she can play Sanju and get away with it. So the two become friends, and one fine day, Sanju confesses his feeling for Tanvi. Tanvi, egged on by a friend of Sanju, decides to keep him hanging coz he's a nice guy who can keep the bad ones at bay. And thus, the two start "getting to know each other", i.e., Sanju wooing her while she plays hard to get.

There is nothing in the story that is out of this world or extraordinary, except for the treatment given to it, which is crisp, fresh, and almost completely gimmick-free. The narrative, involving an aspiring-director-friend of Sanju (played by Snigdha), as she narrates a "routine love story" to a formulaic filmmaker, is creative as hell, and executed without a hitch.

The wry, often self-deprecatory tone is amusing without being lame or out of place. No, there's no place for extra "comedy" tracks in a tale that provides ample fun all by itself.

And, the most refreshing part of it is the fact that here you have a teenage love story without overt sexuality or raging hormones. It doesn't even go to the other extreme of the overtly moralistic. It just is - the way any romance is supposed to be. They aren't trying to tell us how omnipotent and omniscient the hero is, or how virtuous the heroine is, or anything of the sort. They're just narrating a story that they think we'll find interesting.

While the acting by all the characters is everything it should be, it is the screenplay that is king. The visuals, especially the scenes in Kashmir, are beautifully executed, and at no point can you tell that it is a low-budget film.

The soundtrack blends seamlessly into the screenplay. The music by Mickey J. Meyer is pleasant, and will have you humming the tunes for days.

All in all, Routine Love Story is a feel-good entertainer that deftly lifts your mood. The rom-com in the true sense of the genre has finally arrived to Tollywood.
Share. Save. Connect.
Tweet
ROUTINE LOVE STORY SNAPSHOT 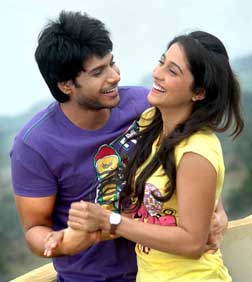 ADVERTISEMENT
This page was tagged for
Routine Love Story telugu movie
Routine Love Story reviews
release date
Sundeep Kishan, Regina Cassandra
theatres list
Follow @fullhyderabad
Follow fullhyd.com on
About Hyderabad
The Hyderabad Community
Improve fullhyd.com
More
Our Other Local Guides
Our other sites
© Copyright 1999-2009 LRR Technologies (Hyderabad), Pvt Ltd. All rights reserved. fullhyd, fullhyderabad, Welcome To The Neighbourhood are trademarks of LRR Technologies (Hyderabad) Pvt Ltd. The textual, graphic, audio and audiovisual material in this site is protected by copyright law. You may not copy, distribute, or use this material except as necessary for your personal, non-commercial use. Any trademarks are the properties of their respective owners. More on Hyderabad, India. Jobs in Hyderabad.