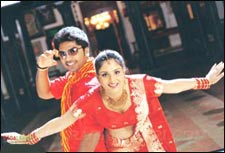 EDITOR RATING
1.0
Performances
Script
Music/Soundtrack
Visuals
NA
NA
NA
NA
Suggestions
Can watch again
NA
Good for kids
NA
Good for dates
NA
Wait for OTT
NA
Most of us would remember the Nitin-starrer Dil – that movie which used the words “student power” and “youth power” 27,193 times each (okay, we’re just kidding – “youth power” was used only 27,192 times). If you do not remember any such film, then you can do one of two things: thank your stars, or watch Dheerudu.

Yes, Dheerudu is really the pits in how far the people who’ve made it their business to dub films from Tamil here to make a quick buck, will go. It’s bad enough that you release in AP a film that you originally copied from AP. What makes Dheerudu worse is the quality of the dubbing – it’s so horribly out of sync, they might as well have just played the dialogues instead of showing the film as well.

Yes, the perpetrators of this one clearly knew it would sink in a week, so they did not put too much effort – it’s just to skim off money from the early unsuspecting viewers. So you have clear sign-boards that say the place Madurai but the city is passed off as Vijayawada, the hero is reading a Tamil newspaper but is talking about the prestige of a “Telugodu” and more such crap.

And to start with, Dil wasn’t a model film either – it showed its “hero” showing complete disrespect for his well-meaning father, threatening a college Principal for an admission that he did not deserve, and courting a girl just to spite her father. It was a completely wrong message for students of impressionable ages, making all the above look cool, and practically exhorting them to be goons.

Dheerudu (Kutthu in Tamil, and a flop) is a frame-by-frame copy of Dil – Guru (Simbu) is a youngster with no redeeming features, and if he were not officially the hero of this film, he’d qualify for getting lectured by every soul on the planet. He can beat up 20 armed goons single-handedly, even if he is just a few inches taller than Danny Devito. One day he gets into a scuffle with goons belonging to Venugopal (Kalabhavan Mani), who do not want him to interact with Anjali (Ramya), their boss’ daughter.

Just to spite them, he swears that he will make her fall in love with him, like she is just an object and not a person whose emotions should not be played with for revenge against someone. The courtship that follows has zero logic and creativity. Once the girl is his, Guru pains the hell out of her dad, sneaking into his house at midnight, beating up his goons, and mouthing some awfully boring lines about student power. And it’s then a battle of wits between Guru and Venugopal.

The performances are all fine, and Kalabhavan Mani still manages to entertain with his physical acts. However, like we said, the lip-syncing is non-existent. Simbu dances well, and has Ramya Krishna for company in a song – by the way, she just does one item number and has no role whatsoever in the film, so do not let the posters fool you.

This one will disappear in a couple of weeks if not lesser, so if you want to watch it, make it really fast.
Share. Save. Connect.
Tweet
DHEERUDU SNAPSHOT

ADVERTISEMENT
This page was tagged for
dheerudu simbu
Dheerudu telugu movie
Dheerudu reviews
release date
Simbu, Ramya
Follow @fullhyderabad
Follow fullhyd.com on
About Hyderabad
The Hyderabad Community
Improve fullhyd.com
More
Our Other Local Guides
Our other sites
© Copyright 1999-2009 LRR Technologies (Hyderabad), Pvt Ltd. All rights reserved. fullhyd, fullhyderabad, Welcome To The Neighbourhood are trademarks of LRR Technologies (Hyderabad) Pvt Ltd. The textual, graphic, audio and audiovisual material in this site is protected by copyright law. You may not copy, distribute, or use this material except as necessary for your personal, non-commercial use. Any trademarks are the properties of their respective owners. More on Hyderabad, India. Jobs in Hyderabad.