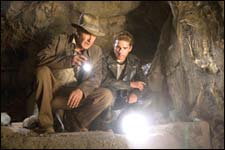 Samrat Sharma / fullhyd.com
EDITOR RATING
7.5
Performances
Script
Music/Soundtrack
Visuals
7.5
5.5
8.0
8.5
Suggestions
Can watch again
Unsure
Good for kids
Yes
Good for dates
Yes
Wait to rent it
No
More than 25 years back, Steven Spielberg, George Lucas and Harrison Ford got together and paid homage to the '30s and '40s adventure shows and pulp novellas through Raiders Of The Lost Ark. After completing what I personally thought was one heckuva adventure trilogy 19 years back, the band is back together, and it's time for the final tour.

In the same spirit as the earlier films, this installment is a high flying adventure, too â€" a roller-coaster road movie and a cheerful fantasy action flick all rolled into one. This is not the same Dr. Jones as you remembered, but he reminds you of him, and that is good enough for me. The plot structure is absolutely the same as the bookend films (Raiders and Last Crusade), where Dr. Jones is chased by a foreign army and government agents in a race to get to a mystical artifact.

However, the Nazis are gone. The year, they tell us is 1957, and the evil army is now the Ruskies, hell bent on winning the cold war and the space race. Professor Henry 'Indiana' Jones Jr. (Harrison Ford) and his friend Mac (Ray Winstone) are captured by the Russians, who want some Area 51 stuff, setting the stage for some fisticuffs in the infinite storage area that made an appearance in the first film. This is a great opening gambit, and sets the stage for the rest of the film.

Too bad the wishy-washy plot that follows doesn't live up to it entirely. Indy escapes, reaches his campus, and immediately government agents try to investigate him, though that doesn't lead to much. He meets a street-smart greaser called Mutt (Shia LaBeouf), who holds a letter to be deciphered. The duo head to South America to help Professor Ox (John Hurt).

The Russians have meanwhile captured Mutt's mom, the forgotten Marion Ravenwood (Karen Allen). Led by their psychic Irina Spalko, the Russians are also headed to the temple of Crystal Skull, where Things Must Happen.

Yep, that's right â€" a psychic leading a team of cold war era Russian soldiers and spetsnaz officers to hunt down an old Professor and his biker kid friend on their way to an ancient mystical Mayan temple. If this rings alarm bells in your heads, you have likely not watched any of the earlier Indy films, and you should totally stay away from this. Anyone approaching this with gleeful enthusiasm to cautious optimism will likely have a good time, though.

The science fiction hokum this time around is positively choking, and that is not because of the setting. The Soviet-era space race between the two nations is ripe with such B-movie possibilities, but in taking Indy out of the '40s, the pivotal engine behind the franchise seems to have been lost. The Ruskies offer a poor excuse for adversaries after the Nazis, and the sci-fi never gets down to the level of the fantasy in the earlier films.

Bizarrely enough, the humanizing of all the unexplained has been downplayed significantly in this film, making Indy's fresh new outing decidedly dull, at least story-wise. The film, however, is far from bad. It is a great ride, and for every deliberately stupid moment near the end, the movie has already given you at least two high adventure moments to take with you.

That is because Spielberg is in top blockbuster form here. Understanding the thematic change the tale has brought along, he subtly changes the color palette and feel of the film. The wide expanse of the earlier films gives room to a grittier and more agitated feel, with claustrophobic environments and slicker colors. It still keeps the widescreen-ness of the film intact, and I for one was blown away with the visuals.

The detailing is still there - the '50s era pop culture is exploited with Mutt and his interaction with Indy, but really, the whole film has moments of understated references (with some very obvious big ones) making this iteration as richly textured as the earlier ones. The advent of CG has admittedly taken away from the upclose and personal Indy touch of brawn, though some of the sequences still remain as thrilling, especially when we see an aging Ford have so much fun.

Indeed, the whole cast seems to be having a grand old time, and the enjoyment permeates through it via screen osmosis, the very elusive magic that filmmakers keep looking for. It is not the most accomplished Indy, or the one with the best yarn, but it is a good time at the movies and a very solid adventure tale. Go relive your childhood, and don't forget your fedora.
Share. Save. Connect.
Tweet
INDIANA JONES - KINGDOM... SNAPSHOT
INDIANA JONES - KINGDOM OF THE CRYSTAL SKULL SNAPSHOT

See Indiana Jones - Kingdom Of The Crystal Skull full details
INDIANA JONES - KINGDOM... USER REVIEWS
INDIANA JONES - KINGDOM OF THE CRYSTAL SKULL USER REVIEWS
1 - 1 OF 1 COMMENTS
POSITIVE  |  NEGATIVE |  NEWEST  |  OLDEST  |  MOST HELPFUL  |  LEAST HELPFUL
USER RATING
6.5
2 USERS
Performances
Script
Music/Soundtrack
Visuals
8.0
6.0
6.5
6.5
Can watch again - No
Good for kids - Yes
Good for dates - No
Wait to rent it - Yes
AKM on 31st May 2008, 5:15pm | Permalink
Come on' lets accept film doent reach to the expectations. CGI effects are miserable.Lot of scenes appear as kiddish.lastly, that alien, when does steven grandpa leaves his obsession for that E.T. The story itself is routine.

ADVERTISEMENT
This page was tagged for
Indiana Jones - Kingdom Of The Crystal Skull english movie
Indiana Jones - Kingdom Of The Crystal Skull reviews
release date
Harrison Ford, Cate Blanchett
theatres list
Follow @fullhyderabad
Follow fullhyd.com on
About Hyderabad
The Hyderabad Community
Improve fullhyd.com
More
Our Other Local Guides
Our other sites
© Copyright 1999-2009 LRR Technologies (Hyderabad), Pvt Ltd. All rights reserved. fullhyd, fullhyderabad, Welcome To The Neighbourhood are trademarks of LRR Technologies (Hyderabad) Pvt Ltd. The textual, graphic, audio and audiovisual material in this site is protected by copyright law. You may not copy, distribute, or use this material except as necessary for your personal, non-commercial use. Any trademarks are the properties of their respective owners. More on Hyderabad, India. Jobs in Hyderabad.