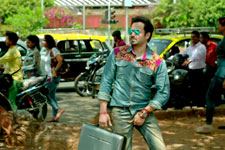 Kritika Deval / fullhyd.com
EDITOR RATING
5.0
Performances
Script
Music/Soundtrack
Visuals
6.5
4.5
6.0
6.0
Suggestions
Can watch again
No
Good for kids
No
Good for dates
No
Wait to rent it
Yes
Raja Natwarlal (Emraan Hashmi) is a conman. He cons people into giving up their hard-earned dough by talking them into it. He does this invariably in the most obvious of ways possible. Which leads us to think that this movie is set in a universe solely populated by morons.

See, the issue here is not con films. We all like con films because we all like to imagine ourselves as being able to set aside the pesky side-effects of accelerated evolution that we gave ourselves - like morality and a conscience - and see how far we get without them.

The issue here is that the movie is a con. It is a lie. It makes you believe that you are going to get a stimulating heist flick helmed by Raja Natwarlal, who turns out to not be capable of helming a band of pickpockets. So, the only ones getting what they wanted from the film are the ones coming for a battle of the wits between Kay Kay Menon and Deepak Tijori, followed by a war of the wits between Kay Kay Menon and Paresh Rawal.

Okay, let's get what they want to sell us as being a story, out of the way first. Raja Natwarlal, a poor soul with a stunted mind who is somehow supposed to be really smart in the film, makes a living conning people alongside Raghav (Deepak Tijori). When a deal comes along that seems to be too good to be true, Raghav goes along with Raja's scheme, and eventually gets himself killed to protect Raja.

A distraught Raja leaves his girlfriend, a bar dancer named Ziya (Humaima Malick) who is now being bullied by the cops over Raja's whereabouts, and goes off to Dharamshala to find Yogi (Paresh Rawal), receive "training", and eventually avenge Raghav's death (the very death that was caused because he, Raja, underestimated the danger involved in the situation).

So, in one scene, the film goes from a merry-go-round of people stabbing one another in the back, to a sappy revenge drama that nevertheless manages to entertain you a bit because Rawal and Menon are just unbelievably good actors.

Raja's "training", as you'll see, involves what looks like the enactment of three SMS forwards involving conmen. This is followed by a plan cooked up involving cricket, South Africa (yay! vacay for the team!), and, apparently tagging the aforementioned girlfriend along but not telling her anything because it's not as if young and enterprising girls are not completely content to sit at home without even thinking of what might be up. When clearly something is up.

Emraan Haashmi, never the most prepossessing of actors in the first place, is shown to a further disadvantage in a role that is weak from the very first frame, and the pretty but plastic Humaima Malick doesn't help. Deepak Tijori does a good job of capturing your attention and sympathy for the short time he occupies the screen. Paresh Rawal and Kay Kay Menon seem very tired, and to be sleepwalking through their roles, which is a characteristic that seems to fit really well with said roles.

The music is as clichéd as the camera-work, the plot movement, the "jokes", the "cons", the dialogues and everything else. Also, there is too much of it. The way the camera moves from scene to scene is exactly how you would imagine a camera moving from this type of scene to that type of scene, particularly in a Kunal Deshmukh film.

At two-and-a-half hours, the film is just way too long to justify its own existence, especially when the actual stuff that happens, for which you are paying money, can easily be summed up in less than an hour. We get that you're not really flooded with options this weekend, but Raja Natwarlal will leave you dissatisfied on all counts.
Share. Save. Connect.
Tweet
RAJA NATWARLAL SNAPSHOT 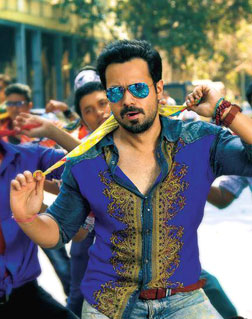 ADVERTISEMENT
This page was tagged for
Raja Natwarlal hindi movie
Raja Natwarlal reviews
release date
Emraan Hashmi, Humaima Malick
theatres list
Follow @fullhyderabad
Follow fullhyd.com on
About Hyderabad
The Hyderabad Community
Improve fullhyd.com
More
Our Other Local Guides
Our other sites
© Copyright 1999-2009 LRR Technologies (Hyderabad), Pvt Ltd. All rights reserved. fullhyd, fullhyderabad, Welcome To The Neighbourhood are trademarks of LRR Technologies (Hyderabad) Pvt Ltd. The textual, graphic, audio and audiovisual material in this site is protected by copyright law. You may not copy, distribute, or use this material except as necessary for your personal, non-commercial use. Any trademarks are the properties of their respective owners. More on Hyderabad, India. Jobs in Hyderabad.